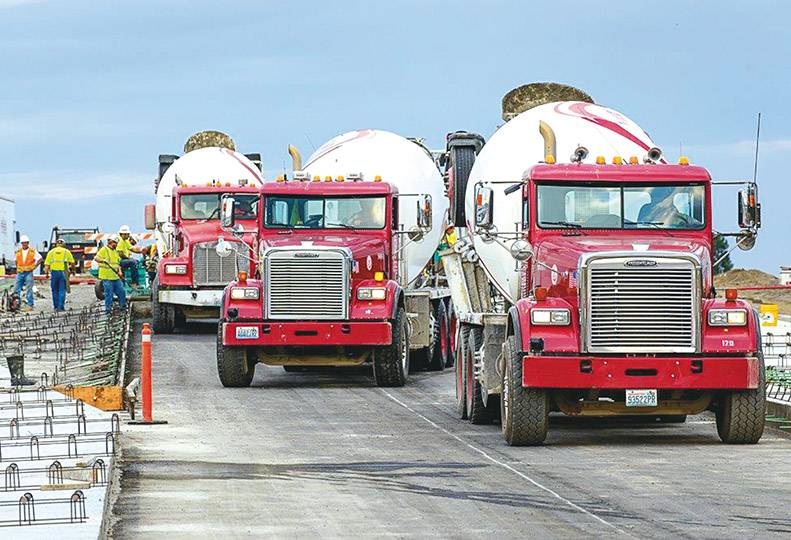 -—CPM Development
Concrete trucks line up during construction of the Francis Avenue bridge in northeast Spokane. Such projects are farther and fewer between, CPM Development executives say. 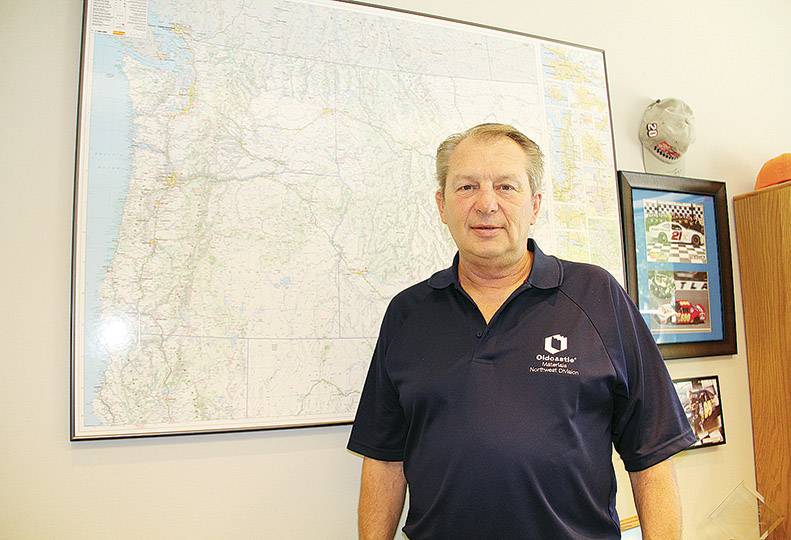 The main reason for this, Gauger says, has been a lack of funding for public works projects.

“That’s definitely the big driver of our business,” he says.

CPM, which is headquartered in a 33,000-square-foot building at 5111 E. Broadway in Spokane Valley, began as Central Pre-Mix Concrete Co. It was founded in 1930 in Spokane by the Murphy family, and then acquired in 1997 by Atlanta-based Oldcastle Materials Inc., which is part of the North American arm of Dublin, Ireland-based building materials supplier CRH plc.

CPM, which also is the parent company of Interstate Concrete & Asphalt Co. of Coeur d’Alene, has about 320 employees in the greater Spokane and Coeur d’Alene areas, Gauger says.

Because about 60 to 70 percent of the company’s work comes from public works, Gauger says, it relies on the funding packages that pay for public projects, such as the $12 billion transportation bill that failed to pass the Washington state Legislature earlier this year.

“Our biggest challenge, at the end of the day, is that the voters really need to get behind the politicians,” he says. “We need a long-term funding package. The voters need to send a loud and clear message.”

A funding package, Gauger says, would do more than just finish the North Spokane Corridor and other delayed projects—it also would provide much-needed economic stimulus to the area.

“It creates jobs, and the money probably turns over 10 times,” he says. “When we’re doing work, we’re buying equipment and putting that money back into the company as reinvestments. We’re hiring more employees, and they start making money, so they’re buying homes. We need (a package), and we need a gas tax to fund it. The more you drive, the more you pay for the roads you’re wearing out.”

Oldcastle has three main areas of business, Gauger says. One of them is the materials division, which deals in asphalt, aggregate, and construction work, and operates here under Central Pre-Mix, Inland Asphalt, and Interstate Concrete & Asphalt.

Another is its products division, which is operated here by Oldcastle Precast-Central Pre-Mix Prestress, and deals in building materials such as brick pavers, glass, concrete, and other precast materials.

Lastly, the distribution division, which is handled by Allied Building Products Corp., another Oldcastle company, transports building materials, such as shingles and sheetrock.

CPM has been involved in several large asphalt paving projects here, Gauger says, including repaving a section of U.S. Highway 2 in Airway Heights. Inland Asphalt Co., which was acquired by CPM in the 1980s and now is owned by Oldcastle, is the contractor for the recent repaving of Interstate 90  from the Barker Road exit to the Idaho State Line.

The company also is involved in the North Spokane Corridor project, and is supplying some of the ready-mix concrete, crushed gravel, and aggregate for the roadway.

It’s also been laying the asphalt on the widening of Highway 95 between Coeur d’Alene and Sandpoint for the last year, Gauger says, and should be close to completing that project this fall. Next year, the company will be doing projects at Spokane International Airport, including some work on the taxiway reconfiguration project. Gauger declined to discuss the specific contract valuations for the company’s current project contracts.

“This is the time of year when we’re just finishing the jobs we’re currently on,” he says. “Our bigger projects are winding down.”

Oldcastle launched in the United States in the 1980s, Gauger says. It then began acquiring smaller companies, and leaving the original owners there to run them.

“Typically we buy family-owned, well-run businesses,” he says. “We’re very decentralized … we leave most of the people there to run the businesses. That’s what we’ve done over the course of these years.”

Overall, CRH does about 50 percent of its business in the U.S. through Oldcastle, and the other 50 percent overseas, Gauger says. The company has locations in 35 countries and about 75,000 employees, Gauger says. Its yearly revenues are in the $18 billion range, he says.

Oldcastle has grown to about 1,500 locations in the U.S. and Canada, and employs roughly 35,000 people, Gauger says.

“So we (CPM) are part of the model for Oldcastle in the U.S.,” he says. “Oldcastle is a big company, but it’s built on a lot of little companies.”