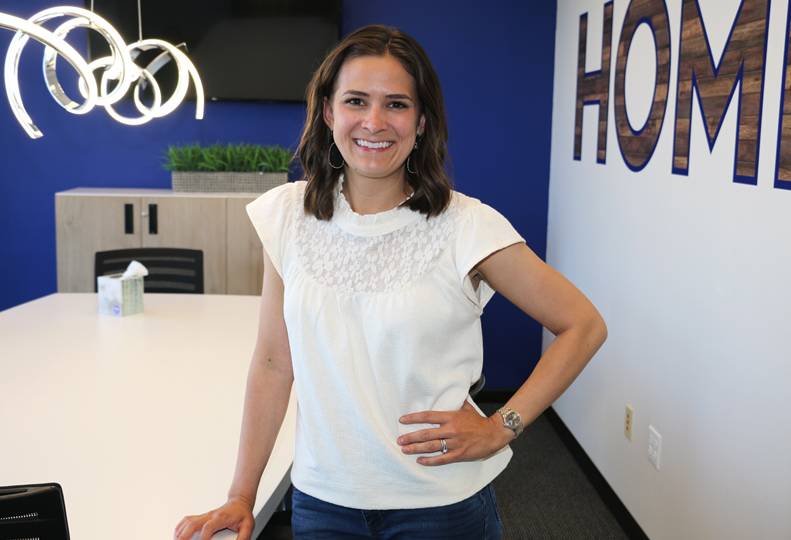 Now that Spokane County has moved to Phase 2 of the Gov. Jay Inslee’s Safe Start plan to reopen the economy, those same companies are busy prepping their offices to bring their office staff and agents back.

She adds that most of the company’s operations were web based already and easily transferrable to an employee’s home office when the need arose.

“As far as logistics, that wasn’t too bad,” Parsons says, “because anybody who had a computer at home could basically do the same things they do at work.”

Since moving employees out of the office, the company has relied further on software in which it invested in 2014 that enabled virtual transaction management where agents can scan and upload paperwork for clients to sign on their digital devices, she says.

To keep in contact with agents, and to keep up morale, the company started doing daily Zoom meetings at lunch each day for the first couple weeks, but then added in educational training during that time for the next couple weeks, Parsons says.

“We started by having daily education, one or two hours a day, and what we found after doing a couple of weeks of that was people were getting pretty burned out,” she says. “We stepped back and said, okay, what do we need to do right now to generate business? It’s not about education anymore.”

Now, the company is focused on working with agents to drum up more business through leveraging existing tools and increasing communication with clients, she says.

“We’ve always had the mindset in our company that technology does not replace the relationship,” Parsons contends. “People still need that human-to-human relationship.”

Numbers weren’t available for May, but she says companywide sales were down about 20% in April compared with April 2019.

“(Mid-May) was the lowest closed sales we had … because of the cyclical nature of our business, 60 days ago we weren’t even allowed to show property for a couple of days — we couldn’t do anything,” she says. “I think we saw the pit over that last week, and this week we’re back up.”

However, with the county being approved to move into Phase 2 of the reopening plan, she anticipates business will pick back up again rather quickly.

She theorizes that once more states begin to relax travel restrictions, there may be an influx of residents moving to the area from larger metropolitan areas who no longer wish to live in densely populated areas.

“I think, in the third and fourth quarters of this year, we are going to have more relocation from different areas — California and the coastal cities — than we’ve had in previous years,” she contends.

In keeping with the governor’s guidelines for real estate agents and staff will be required to wear masks, Parsons says.

While the public isn’t required to wear masks when visiting the office, she notes, the company is encouraging the public to do so.

Inslee’s guidelines for real estate companies during Phase 2 of the reopening plan now allow for in-person home showings of up to three people, including the agent, as well as the reopening of offices, provided companies follow the requirements laid out in the plan.

Those include maintaining at least six feet of social distancing through all interactions, requiring clients to make appointments for in-person services, screening people for symptoms before starting work, and several other requirements. A full list is available on the governor’s website, or on the Spokane Association of Realtors website, which also includes a list of frequently asked questions.

What was originally planned to be an 18-month rollout was done in two days, she says, and the technology allowed for more effective communication between the company and its commercial and residential tenants.

“Everybody was very concerned,” Sample says, “ … We saw things coming down the pipeline and were able to proactively communicate.”

The software also allowed residents access to their accounts digitally, she adds, so tenants can check their balances and pay their rents through a portal.

Company employees were also able to take home their office phones, which operate on networks and can be used to make calls from a range of devices. That was beneficial, she says, in ensuring that property managers could be reached at a consistent number.

Real estate agents also used video and messaging apps, such as FaceTime and Google Chat, to provide digital tours of spaces and communicate with clients, she says.

Black Realty Management opened its offices to the public on May 26, Sample says.

The company has installed a plastic barrier on the receptionist desk, as well as placed tape line perimeters to guide employees and guests and ensure safe distancing, she adds.

About 45% of the in-house main office staff has returned to the office, she says, and over the next two months the company plans to bring back more on a rolling basis.

Sample adds that employees are being evaluated on a case-by-case basis, and the company is accommodating those who have children at home or who have pre-existing health conditions that make them more vulnerable to the virus.

The brokerage office on the third floor of the NAI Black building is currently fully operational, she adds.

“People are excited to connect again with each other,” she says, adding that the company plans to maintain its team environment, just on a reduced scale, by planning smaller departmental gatherings to celebrate sales or new properties.

“We’re making a conscious effort to celebrate once a month over the next three months,” to remind employees that they are not only surviving the pandemic, but are thriving, she says, adding that the company has brought on 180 new commercial properties within the last few months.

Gordon Hester, president and CEO of Kiemle Hagood, says the company reopened its offices on May 26 as well and is adhering to the social distancing protocols and requiring agents to wear face mask when in the office.

From a technology standpoint, the real estate company has been using video conferencing platforms, such as GoToMeeting and Zoom, to host departmental and client meetings, he says, and agents have been using their cellphones to give video tours of spaces to prospective tenants.

He anticipates a number of agents will continue to use this technology, despite Phase 2 allowing for slightly larger in-person meetings.

Kiemle Hagood has also significantly upped its usage of DocuSign, a software that allows clients to sign paperwork digitally, he says, adding that he estimates agents are using the tech about 10 times more than before.

“I would anticipate we will continue to see a pretty high use of that,” he says.

Kiemle Hagood has about two-thirds of its 60 employees back in the office now, Hester says.

The company has seen a significant reduction in transactions since the shutdown, he adds, noting that the company had about $1 million in cancelled sales in March.

However, Hester says he expects to see a steady pickup within the next few months as more people go back to work.