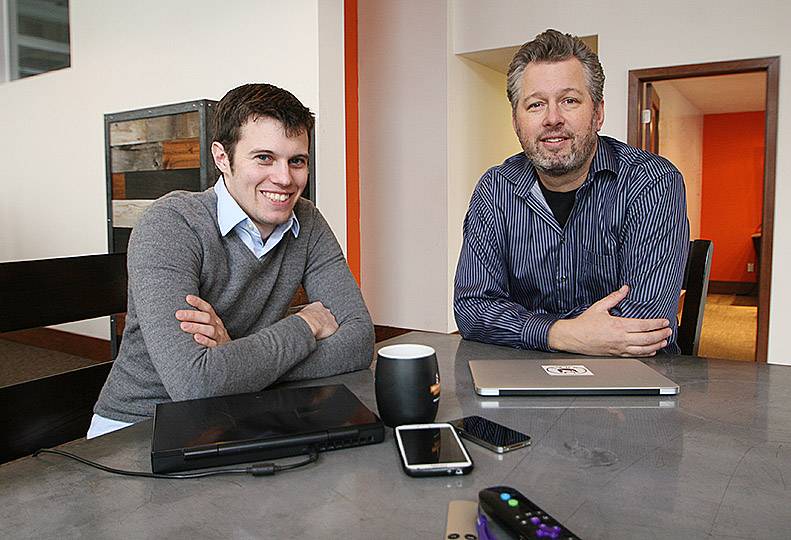 -—Judith Spitzer
Local entrepreneurs Darin Herleikson and Ed Reese were both behind the idea of Rebooked at last April’s Startup Weekend Spokane. Its founders hope to complete first-round financing soon.

Rebooked, one of the winners from last April’s Startup Weekend Spokane, has gone live with its app enabling service providers such as hair salons, dental offices, and medical providers to rebook canceled appointments and no-shows.

The vision for Rebooked was one of 33 ideas pitched at the April event, and one of three top finishers that weekend. Startup Weekend is a national organization that promotes 54-hour events where developers, designers, marketers, and entrepreneurs come together at locations throughout the country to share ideas, form teams, build products, and launch startups. Rebooked’s prize was an invitation to make a funding pitch to the Spokane Angel Alliance, a local venture fund.

CEO Ed Reese says the company’s five founders have raised $275,000 of the $500,000 in startup funds needed to get the enterprise fully up and running. He says the company intends to prove the business concept in Spokane during the next 18 months, and then expand out geographically from here.

Reese and the others formed Rebooked last June; the company’s app went live in December, and it currently has 10 businesses signed up to use the service. Among the businesses using the app are Spa Paradiso in Kendall Yards and New Moon Acupuncture and Jaazz Salon, both in downtown Spokane.

The Rebooked app must be downloaded by users and service providers alike.

The app is free for clients and patients, and there are no set-up fees, subscription fees, or user fees, Reese says.

Users only have to download the Rebooked app, wait to be notified of an available appointment at a business or health care provider they use, and then claim the appointment online on the app.

Reese says his local research shows about 15 percent of all appointments are canceled, but adds the average cancellation rate is about 20 percent for health and wellness providers. He says he’s received good feedback from businesses that are interested in using the app.

So far, the business has produced no revenue, but Reese says he has budgeted revenue over the first year at $22,750, and predicts the company will break even in two years.

“We’re hoping to close out our first round of financing by the end of January,” he says. “The funding we have is just sitting in the bank for the most part.”

He says company employees together have invested about $12,000 as a group. That money has gone to advertising, printing, and basic costs. “We’re just in the first stages of proving the concept,” he says.

One of Reese’s mentors has been Tom Simpson, Spokane entrepreneur and angel-investing fund organizer, with the Angel Alliance, he adds.

“The funding process is all very new to me personally and he has helped with the process of raising funding,” he says.

Connor Simpson, one of Rebooked’s founders, is Tom Simpson’s son and also co-founded Barters Closet, a social network for people to barter, buy, sell and donate their clothes.

Reese grew up in the Greenbluff area and moved back to Spokane about five years ago after living for several years in San Francisco, working in sales and marketing. He says he and his wife moved back to start the marketing company.

“Neither my wife nor I had jobs here, but we wanted to be in Spokane to raise our family,” Reese says. “San Francisco is a very anonymous city; you’re kind of on your own.”

Reese says he believes Spokane’s startup community has been changing and gaining momentum, especially within the last couple of years.

“The amount of support from agencies, business funds, and public (entities) like Greater Spokane Incorporated has changed. We’ve come so far so quickly and that’s a sign of the business community changing, and it’s a sign of the momentum here,” he says.