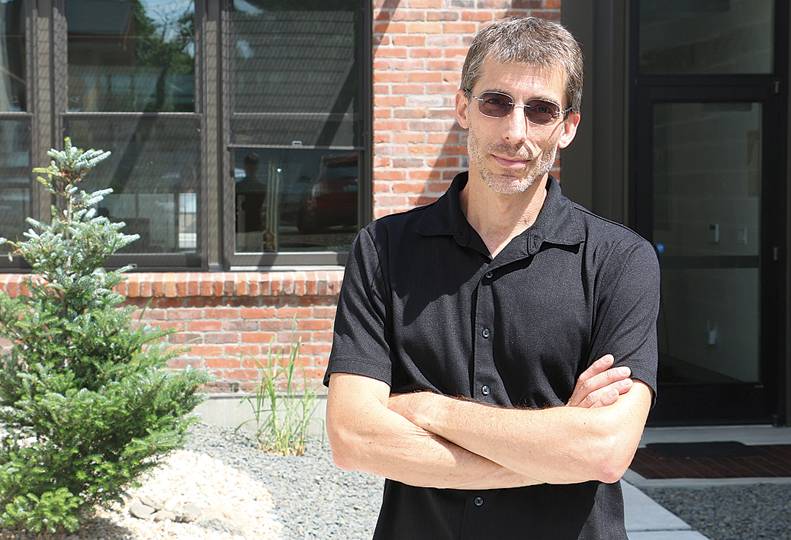 -LeAnn Bjerken
Indigo Diggs Architecture owner and principal Chris Morlan says the company moved to the Sprague Union District in order to be part of the up-and-coming neighborhood.

Chris Morlan Architecture has rebranded to become Indigo Diggs Architecture, after moving from its longtime location in downtown Spokane to a newly remodeled building in the Sprague Union District.

Chris Morlan, owner and principal of Indigo, says the firm moved to have room to grow in a neighborhood that’s also on the verge of change.

“This year, our volume isn’t that much higher than last, but the projects we take on are increasing in dollar value,” he says. “Our goal with this move was to establish a street-level presence that wasn’t just my name on a shingle, in a space that would allow us to grow along with the community.”

While he declines to disclose Indigo Diggs’ annual revenue, Morlan says it’s probably about 20% higher this year than last.

“We have a lot of new, young developers migrating to Spokane, as well as out-of-towners wanting to build homes here,” he says. “There’s an influx of fresh money that’s boosting the local economy a bit.”

He says the name Indigo Diggs was an idea left over from a partnership with one of his friends who’s a contractor.

“We no longer have any projects planned together, but I kept the name,” he says. “It’s got that construction feel, but it’s also kind of urban, and the sound rolls off the tongue nicely.”

Morlan says the 25-year-old firm previously leased space in the Eldridge Building, near the intersection of first and Cedar, on the west end of downtown Spokane.

“My wife is a marriage-and-family counselor, and we shared a space with her business for a long time,” he says. “But eventually, we felt it was too crowded, and our clients needed different spaces.”

He says Indigo Diggs bought its current location, a 1,500-square-foot building at 1912 E. Sprague, just over a year ago, and Spokane-based Timberstone Builders LLC spent a year remodeling it.

“We moved in by October 2018, and after a few months, we put in signage with the Indigo name, and really started to embrace the new location,” he says.

Morlan says he’d considered several spaces, but he felt the building was the right size and the timing was ideal for a move.

“We got in right at the beginning of the regentrification project, when Sprague was still all torn up,” he says. “The building’s previous owners used it as an appliance repair shop, and once that went out of business, they boarded the front section and kept the back as a living space.”

Morlan says the remodel included reinsulating the building’s exterior, repairing a rear foundation wall, adding water and sewer services, excavating and re-pouring a basement crawl space with concrete, and resurfacing the roof to include translucent skylights and solar panels.

Morlan says the firm completes about 75 projects every year.

“We do a lot of retail and tenant improvements and some residential projects,” he says. “Lately, we’ve also been doing more with existing-conditions reports and master-planning work.”

Existing-conditions reports help building owners and property managers document the current square footage and use of their spaces more accurately, while master planning helps clients determine the best use for a property before starting design.

“A lot of the existing conditions documents we’ve done have been for out-of-town owners, while master planning projects are usually for clients who want to understand the potential of a site before funding is determined,” he says.

In terms of design trends, Morlan says business owners seem to be looking to design spaces that not only allow room for them to work, but also give them the option of leasing office space to others.

“Business owners are looking for spaces that are comfortable, that allow for work, eating and socializing to happen in close proximity as opposed to the old corporate feel,” he says. “They also want to be able to use extra space to generate income through leasing.”

Another trend Morlan says he’s observed is younger homeowners who build new homes aren’t necessarily tied to them for long.

“There aren’t as many building with the mindset of having that property be a forever home,” he says. “They’re perfectly willing to sell and start again if another opportunity comes up. Retired individuals, on the other hand, are still willing to spend to renovate and be comfortable in their final home.”

“Both locals and out-of-towners are shocked by the cost of building and remodeling projects,” he says. “It’s somewhat understandable, because the cost increases in recent years blow our minds, too, sometimes.”

In addition to Morlan, Indigo Diggs currently has two full-time employees, and one individual who works with the company as an independent contractor.

“I’d love to find the right fit for at least one more seat here at our offices,” he says.

One of Indigo Diggs’ recently completed projects was the design of a three-duplex development currently under construction at the northwest corner of 29th Avenue and Perry Street.

Morlan says the firm also recently completed an interior remodel of a 9,000-square foot building at 105 W. Third, that will serve as the new headquarters for Spokane Treatment & Recovery Services, an organization that offers inpatient and outpatient treatment for people with alcohol and substance addictions.

He says Indigo Diggs is starting design plans for a new, 24,000-square-foot facility Spokane Treatment & Recovery Services plans to build in Spokane Valley, on the 13000 block of East Nora Avenue.

“They plan to incorporate four different program areas into one facility, including both outpatient and inpatient services,” he says. “They offer some really great programs, and we’re proud to be working with them on this new project.”

Morlan says Indigo Diggs likely will complete its master-planning research for the site later this summer and hopes to continue with architectural designs for the project.

Looking ahead, Morlan says Indigo Diggs hopes to work on owner-builder projects, as well as pursue design-build projects with contractors.

“We’re interested in potentially buying properties ourselves that we can own and develop into rental opportunities or use to help others build what they need,” he says. “We’d also like to get more involved with design-build projects, so we’re seeking to develop more of those relationships with area contractors.”