Hopes to add 20 hotels in next year, led by franchising 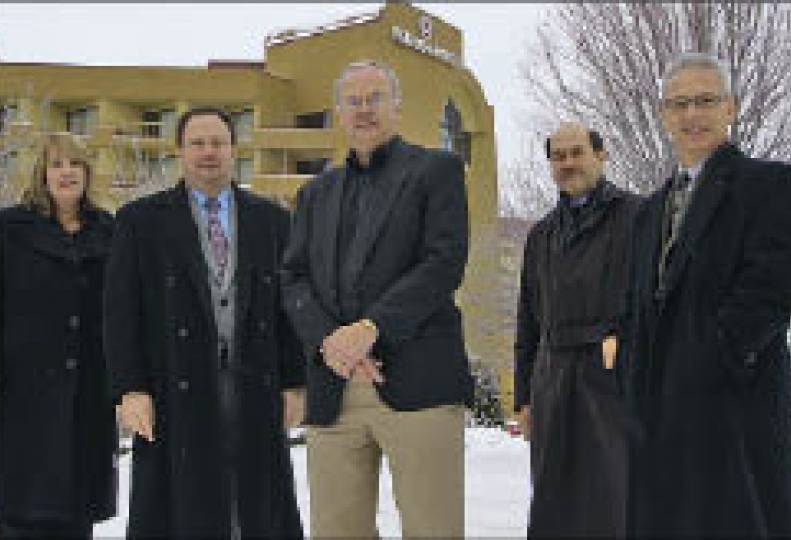 -—Staff photo by Paul Read
Much of Red Lion's management team, which includes, from left, Pam Scott, Harry Sladich, Jon Eliassen, Dan Jackson, and George Schweitzer, is new to the chain this year.

Red Lion Hotels Corp., with its new senior management team now charting the Spokane-based company's future, hopes to add 30 to 40 hotel properties to its chain within the next three years, including 20 in the next year, and says it has the corporate infrastructure in place to handle up to 150 hotels.

Such growth would be heady for a chain that currently includes 43 hotels and, like others in its industry, is fighting the effects of a limping economy that has dampened both business and leisure travel. Red Lion executives, however, say the time is right to attract other hotel operators into its franchise network, which makes up a little more than a quarter of the chain's properties and has become a strategic growth focus for the company.

Currently, the Red Lion chain includes 12 franchised hotels, though the company announced recently that three more would come on board early next year. The chain's other 31 hotels are operated by Red Lion, either in facilities it owns or leases. The chain operates in eight Western states and British Columbia, and employs about 2,500 people, including just more than 400 in Spokane.

Sladich is among several senior managers brought on in the past nine months by Jon Eliassen, who was named interim president and CEO of the publicly traded company last January, following the termination of former CEO Anupam Narayan.

Eliassen, who retired as chief financial officer of Avista Corp. in 2003 and later served as president and CEO of the then-Spokane Area Economic Development Council, also brought in Richard Carlson as vice president for lodging development, Sandi Heffernan as corporate controller, and, most recently, Dan Jackson as senior vice president and CFO.

Eliassen says the company will focus its growth exclusively on 11 Western states and British Columbia, mostly because the Red Lion brand already is well-known in the West, and it would be too expensive to market the company farther east.

The chain currently has hotels in Washington, Idaho, Montana, Oregon, California, Nevada, Utah, and Colorado, but also is looking to enter markets in Wyoming, New Mexico, and Arizona.

He says there are plenty of opportunities, even in metropolitan areas in which it already has hotels, including the Seattle area.

Although the company doesn't rule out the possibility of developing new hotels or acquiring or leasing facilities that it would operate itself, its greatest opportunity for growth is with franchising, as hotel owners that currently are aligned with other hotel chains rethink those relationships during adverse economic conditions, says Sladich.

Early last month, Red Lion announced that it had signed franchise agreements with two hotel owners in northern California, and earlier this week said it also will add a third in that state. One, a 111-room limited-service hotel in Rancho Cordova, near Sacramento, will become a Red Lion Inn in January. The hotel originally was built as a Fairfield Inn by Marriott. The second, an independent full-service hotel with 189 rooms at Oakland International Airport, will be converted into a Red Lion Hotel early in 2011, the company says.

The new addition announced this week is a 189-room hotel in Concord, Calif., about 20 miles northeast of Oakland. That hotel, which will become the Red Lion Concord, currently is a Holiday Inn. The full-service hotel also has 5,400 square feet of meeting space.

Another economic condition that fuels Red Lion's franchising strategy is the tight credit market. Eliassen says few hotels are being developed these days, and securing capital to make acquisitions is difficult.

Sladich contends that Red Lion is in a good position to attract additional franchise partners because its brand name is well-known, it has made recent investments in computer systems that he says will give it an edge in marketing, and, perhaps most importantly, because Red Lion operates hotels as well.

"We're owner-operators. The franchisees like that," he says. "They know we know what's it's like in the trenches."

In another strategic initiative, Red Lion no longer focuses solely on full-service hotels, which have such amenities as restaurants, lounges, room service, meeting space, and catering.

The chain has been taking on hotel properties that are considered either "select service," which means they offer some limited-menu dining options and bar service, or limited service, which includes inns with just a complimentary breakfast buffet and some take-and-eat prepared foods.

The company says that about 60 percent, or 26, of its hotels are full-service properties, while the remaining 17 are a mix of select service and limited service.

That flexibility, Sladich says, allows Red Lion to have profitable properties in locations where a full-service hotel isn't necessarily viable, and thus opens up more markets to the Red Lion brand.

For the quarter ended Sept. 30, Red Lion's revenues from food and beverage service fell about 13 percent compared with the year-earlier quarter.

Eliassen says that while overall revenues essentially were flat, the company saw gains in three closely watched measures, the most touted of which is revenue per available room, or RevPAR in industry parlance. Third-quarter RevPAR for Red Lion's owned or leased hotels grew 8.3 percent, to $63.46, compared with a year earlier, while the average daily rate the chain got for its rooms grew 5.8 percent, to $90.50. Occupancy, meanwhile, grew 1.6 percent to 70.1 percent, the company says.

What that all means, says Sladich, is that a recent strategy to focus on getting a higher room rate, rather than sacrificing rate for volume, is working. He says Red Lion is holding its own versus its competitors in terms of RevPAR, while other chains are doing it based on volume, "we're doing it with rate."

That focus on getting a higher room rate, says Sladich, will pay dividends as the economy improves and occupancy grows naturally, because Red Lion won't have to wean customers from discounted rates like other chains will.

"When the volume comes back, we're right there" with normal pricing in place, he says.

An investment the company has made in software recently is helping it to predict when occupancy might dip and it ought to make more rooms available at discounted prices through such aggregators as Hotels.com, to which Red Lion also must pay a commission. When the software shows a relatively full pipeline of future bookings, the chain can rely mostly on its own registration systems to rent rooms and thus hold a better net price, says Sladich.

That investment, along with higher recent spending on sales personnel, says Eliassen, have adversely affected the company's earnings, but should position Red Lion better for the future.

Meanwhile, Eliassen says, Red Lion hopes to work to improve its balance sheet. As of Sept. 30, the company had about $3 million in cash and cash equivalents on hand, and outstanding debt of about $124.8 million, about $36.5 million of which will mature in the next 12 months.

The company has told investment analysts that it plans to try to sell its 478-room hotel property in Denver to raise capital to pay off some of that debt, and hopes to do that in such a way that it can either continue to operate the hotel on a leased basis or have it become a franchise. Eliassen says there might be opportunities to sell off other hotel properties it currently owns, though he declines to elaborate.

Jackson, the CFO, says Red Lion also will look at a host of other options to refinance or repay debt.

Says Eliassen, "We would like to have more flexibility in our balance sheet."

Red Lion's current portfolio of 43 hotels has 8,383 rooms and about 420,000 square feet of meeting space. The two new franchise hotels in California will add another 300 rooms.

The company closed its leased hotel property in Astoria, Ore., during the third quarter because the property had "reached the end of its useful life." Eliassen says Red Lion will be looking for other opportunities to have a Red Lion hotel in that city.

Sladich says Red Lion plans to do a better job of packaging hotel rooms with its entertainment options, and says the company also is stepping up its efforts to create and push packages that include food and drink with a hotel stay, where available.

Also, he says, Red Lion has put greater emphasis on its frequent-stay clientele, for whom it offers a rewards program called the R&R Club.

"Our R&R Club membership is up 26 percent year-over-year, which is quite a testament to the loyalty of our frequent guest base," George Schweitzer, the company's executive vice president and chief operating officer, told stock analysts during the company's third-quarter earnings conference call.

The company says about 14 percent of its room nights currently are used by R&R Club customers.

Red Lion Hotels Corp.'s stock is listed on the New York Stock Exchange under the symbol RLH. Last week, it was trading at about $7.80 a share, on the upper end of the $4.31 to $8.24 range in which it has traded during the past 52 weeks.

The company was founded here in 1978 by the Barbieri family, of Spokane, and early on operated hotels under the Cavanaugh's brand. In 1999, it acquired Seattle-based WestCoast Hotels Inc., and adopted the WestCoast name.

In 2001, it acquired Red Lion Hotels Inc. and four years later, after having rebranded most of its WestCoast hotels to the Red Lion brand, changed its name to Red Lion Hotels Corp. Now all of its hotels operate under the Red Lion flag. Don Barbieri remains chairman of the company.