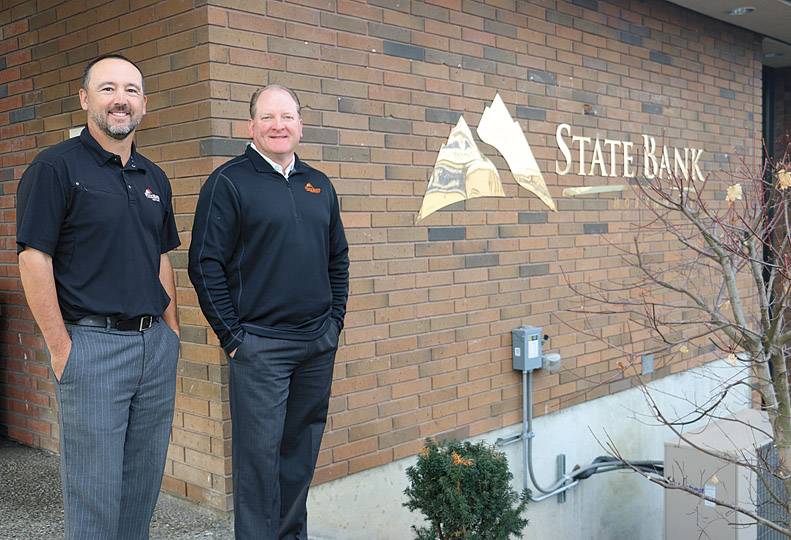 -—Judith Spitzer
Mike Jackson and Gregory Deckard, of State Bank Northwest, say refinances doubled in the fourth quarter from 2013 to 2014.

Some Spokane banks and credit unions are reporting a mini-boom in home mortgage refinance loans in recent months due to another dip in mortgage interest rates.

In the Spokane area, 30-year, fixed-rate mortgage rates had fallen to between about 3.69 percent and 3.8 percent as of last week, down from 4.43 percent a year earlier.

“Refinances have gone up by about 25 percent over the last 45 days,” Patnoi says.

Last month, Washington Trust processed about 300 applications to refinance home loans, he says, adding that as of the third week of February, the interest rate for a 30-year-fixed-rate mortgage was 3.75 percent at Washington Trust Bank for applicants with higher credit scores.

Boosting the increase in refinancings is the tendency for people to stay in their homes and make improvements to them, rather than purchasing a new home, when there’s a low inventory, as is currently the case, he says.

“There is a lack of inventory in Spokane right now, and in this rate environment, with lower inventories, people decide to do more to their homes than they have in the past,” he says.

He adds that a few borrowers are cashing out equity at the same time that they’re refinancing.

On Feb. 5, data released by the Federal Home Loan Mortgage Corp., also known as Freddie Mac, showed that average fixed mortgage rates, after an uptick the previous week, reversed course and fell amid weaker-than-expected housing and economic data. Freddie Mac was created in 1970 to expand the secondary mortgage market. It buys mortgages on the secondary market, pools them and sells them as a mortgage-backed security to investors on the open market.

“Fixed-rate mortgages rates are once again back near their May 23, 2013, lows,” its primary mortgage market survey said. It showed that 30-year-fixed rate mortgage rates averaged 3.66 percent, compared with an average of 4.32 percent a year earlier.

Spokane Teachers Credit Union has seen a spike in home mortgage refinances as well, says STCU spokesman Dan Hansen, who adds that the refinance market has picked up significantly since the beginning of 2015, compared to the final weeks of 2014.

“There has been a spike in refinances in the last 60 days because interest rates have dipped again,” he says.

When rates fell, STCU began to experience a surge in applications, he says.

Effective Jan. 26, the U.S. Department of Housing and Urban Development’s Federal Housing Administration lowered the annual fee it charges a typical borrower to 0.85 percent from 1.35 percent, according to its website.

Hansen says he feels the surge in refinances is being driven by the low rates, and not by other factors such as the reduced FHA fee.

“Our mortgage loan refinances have doubled year to year from fourth quarter 2013 to 2014,” Deckard says. “We’ve had 100 percent growth.”

Deckard says as real estate values go back up, so does the equity in people’s homes, and many consumers are taking advantage of that by reducing the term of their loans to 15-year from 30-year mortgages. “And that keeps their monthly payment about the same,” he adds.

“With the volume of refinances already this year and what’s coming in down the pike, there is every indication that it will be another record year,” he says

Wells Fargo Bank’s Jonathan Taylor, a regional sales manager for Washington and Alaska based in Bellevue, Wash., says the numbers of mortgage refinance loans being handled by that bank are up significantly in Spokane and throughout the state, driven by lower interest rates rather than by consumers looking to take advantage of the equity in their homes.

“It’s a bit different than it was in previous years in that people aren’t looking to cash out equity, people are just looking to reduce their interest rates,” Taylor says. He says people who bank with Wells Fargo typically are aware of the decrease in the FHA mortgage insurance rate, since the bank makes information on lower rates available to its customers.

He says he cautions consumers to look into what interest rate they’re currently paying and then take a look at other factors such as how long they plan to stay in their home.

“If you’re moving in the next year, then it’s probably not advisable because of the associated costs with refinancing a loan, like closing costs,” he adds. “But if you plan to remain in the home, and you can buy down the interest, it’s worth a conversation.”