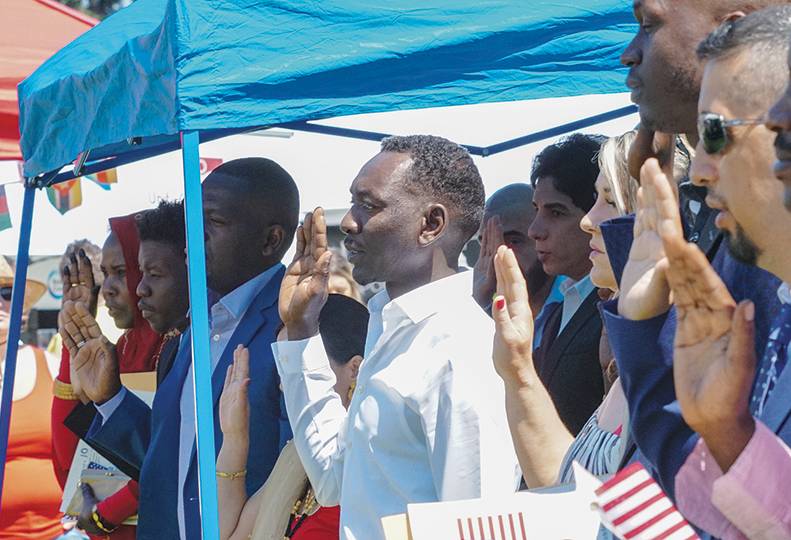 -Gen Heywood
Refugees participate in a naturalization ceremony at the 2019 World Refugee Day, in Spokane.

Over the past year, the organization, which was created in 2011 to fill service gaps for refugees in the Spokane area, has been awarded grants totaling $800,000, she adds, to be distributed over five years.

A refugee is a displaced person who has been forced from their country and who cannot return home safely, according to U.S. Citizenship and Immigration Services. To be considered a refugee, such a person must demonstrate they were persecuted or fear persecution due to race, religion, nationality, political opinion, or membership in a social group.

Most of the nonprofit’s work already was performed remotely, she says, so it was easy for the organization to adapt to distancing requirements in response to the coronavirus outbreak.

However, as with nearly every organization, Refugee Connections has had to pivot and adopt new practices in light of the pandemic.

The organization had to cancel its World Refugee Day event, typically held in June in partnership with a dozen Spokane organizations, Fakasiieiki says. The event usually draws hundreds of attendees and about 50 volunteers.

“One of the advantages of being part of the provider agencies is we know what other organizations are doing,” she contends. “We meet with them quarterly. We’re in conversations with their directors and with other workers.”

That network helped when the pandemic hit, she adds.

Refugee Connections works closely with the Spokane office of World Relief, a global Christian nonprofit that provides programs to victims of disasters, extreme poverty, violence, oppression, and mass displacement, which was granted funds to make face masks. The nonprofit was able to donate cloth and get clients masks quickly, says Fakasiieiki.

World Relief, along with nine other agencies, also partnered with Refugee Connections for the census drive, food distribution, and COVID-19 resource distribution, she adds.

In 2018, the most recent year for which data is available, the U.S. Office of Immigration Statistics reported Washington state received the second most refugees of any state, with 1,537, or 6.9% of all refugees who came to the country that year. Only Texas received more, with 7.4%, or 1,669 refugees. Numbers weren’t available at the county level.

“Spokane is and has been a welcoming place for refugees,” contends Fakasiieiki. “Generally, we just need to continue that trend.”

The nonprofit, located in the Community Building, at 35 W. Main, offers eight programs to assist refugees, she says.

Another program, Refugee Kids, offers science, technology, engineering, and math challenges. It also runs arts and crafts after-school programs, all with the goal of “building up their capacity for English language,” Fakasiieiki says.

The organization has 15 employees, most of whom are translators and case workers.

Refugee Connections puts on an annual two-month Refugee Harvest in partnership with Spokane Edible Tree Project. Through the program, several groups of five to 10 refugees take a trips to local farms or orchards to pick produce, then take it back to the Edible Tree facility for cleaning and distribution, says Fakasiieiki.

One of the nonprofit’s more recent program additions is its Census 2020 Outreach, which connects refugees with cultural liaisons representing 10 language groups, including Russian, Arabic, Kinyarwanda, Nepali, Karen, Chin, Hmong, Vietnamese, and Korean. The mission of the liaisons is to educate refugees about the importance of being counted in the census.

“We fill a niche role in the community, and we’re seen credibly with the other refugee providers,” she says. “The programs that we’ve launched are really meant to serve very specific needs in the community that other organizations aren’t able to do.”