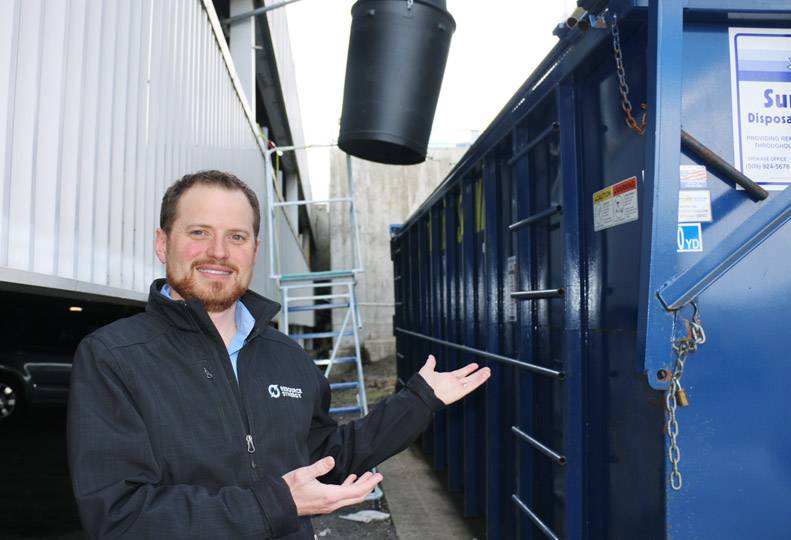 -—LeAnn Bjerken
Erik Makinson, owner and operator of Resource Synergy, says the company developed a chute system at the Rock Pointe Corporate Center, through which clients can dispose of recyclables.

Now in its second year of operations, Spokane-based sustainability consulting business Resource Synergy has established a niche for itself here, helping businesses reduce costs by wasting less and recycling more.

Owner and operator Erik Makinson says while most startups pivot in their early years, Resource Synergy managed to find its focus early on, by aiming to create effective recycling programs for properties with multiple tenants.

“I really tried to make our growth very intentional,” he says. “We may eventually move beyond recycling into other areas, but right now, the demand is such that we’re mostly dedicated to recycling programs.”

While Resource Synergy is based out of Makinson’s home office, he does most of his work on the go, including gathering data, educating business tenants, and installing recycling bins at various sites.

“There’s more value for the client in visiting sites in person,” he says. “Because there are different nuances to consider with each property, it helps to be on-site to identify barriers to a recycling program and get creative in overcoming them.”

Makinson first gained an interest in sustainability in 2008, while working for Coca-Cola Co. in Seattle to develop a compostable soda cup. He later moved to Bentonville, Ark., to continue working with the company’s global sustainability strategies.

Prior to starting Resource Synergy, he spent six years working with Ecova Inc., the Spokane-based energy and sustainability management service provider. While there, Makinson helped Ecova to build a waste consulting division, which today supports 100 clients at over 60,000 business sites.

He says he started Resource Synergy because he saw an opportunity for Spokane businesses to become more sustainable.

“Between 80 and 90 percent of all office supplies are recyclable,” he says. “Yet, prior to meeting with us, most businesses are only recycling an average of 10 percent, and some don’t have any recycling options at all.”

Makinson is Resource’s sole employee, although he employs a part-time associate who helps with recycling bin installations and administrative tasks.

So far, he says, the company has 18 clients, and has implemented its recycling program at just over 50 properties here. While there are some stand-alone businesses and owner-managed properties in the company’s portfolio, most of its clients are property management companies, he says.

“Most business tenants want to recycle, but they face a lot of barriers in starting a program,” he says. “They can’t afford to buy or rent bins, or educate staff. Larger buildings with multiple tenants usually share janitorial staff and dumpster space, so more often than not, unless the whole building is involved a program doesn’t happen.”

He says he realized early on that recycling programs would resonate more with management companies, as their priority is to increase tenant value and reduce operating costs at their properties—goals that directly coincide with Resource Synergy’s own.

“Their job is to create happy tenants and gain a return on investment,” he says. “The cost of disposing of a cubic yard of trash is four times what it would cost to recycle that same material, so the more we can recycle the more we’re saving clients in disposal costs, while helping protect the environment.”

“Kiemle & Hagood was an early adopter of our recycling program and has implemented it at more properties than any other client so far,” he says. “Unico is another company with an environmentally conscious focus that invests long term in its properties.”

Some of the downtown buildings in which Resource Synergy’s recycling programs have been employed include the U.S. Bank Building, Washington Trust Financial Center, Paulsen Center, and Rock Pointe Corporate Center.

“It’s taken us a while to get here,” he says. “Resource Synergy started in September of 2015. We gained some traction in October that year, and then the windstorm hit.”

Following the windstorm, Makinson says property managers were more concerned with restoring electricity, and making repairs than they were with implementing a recycling program.

“We didn’t really get our momentum back until January, and we still see some ebb and flow depending on weather and property manager schedules,” he says.  “Recycling is my top priority, but for them, it’s not as urgent as, say, electricity or snow removal.”

Overall, Makinson says he’s streamlined the actual the process of starting a recycling program, so that it usually only takes a few weeks.

“There’s a lot of behind-the-scenes work ahead of time, mostly figuring out the necessary capital and analyzing how much savings can be achieved,” he says. “From there, we install bins and coordinate with both office and janitorial staff to make sure the program runs efficiently from desk to dumpster, and beyond.”

To better estimate cost savings and keep programs running smoothly, Makinson worked with a software developer to create a database that tracks information like dumpster size, frequency of collection, volume of trash or recycling picked up, disposal bills, and purchase or rental of recycling bins.

“When we can print reports with tangible statistics, it gives our clients a clearer picture of what their needs really are and where we can help them save,” he says.

While he declines to disclose the business’s revenues, Makinson says that since its start Resource Synergy has deployed over 10,000 recycling bins and educated more than 6,000 people.

“We’re at a point now where I can pay myself a modest salary, and still support the business off of recurring revenue,” he says. “My largest expense right now is purchasing recycling bins.”

Makinson buys bins on a quarterly basis and stores them in a downtown warehouse space. Although the number of bins ordered varies based on the size of installs he has scheduled, Makinson says a typical order is around 3,000 bins.

“For some of our clients, buying and installing bins is their only barrier to creating a recycling program,” he says. “It’s easier for us to purchase those and either sell or rent them to clients. Some businesses see a higher worker turnover, and their needs change quickly, so renting gives them more flexibility.”

Looking ahead, Makinson says Resource Synergy remains focused on recycling programs targeted toward commercial clients, although he admits there’s a chance his company could outgrow the market.

“There are only so many commercial buildings here right now,” he says. “Our coverage area already includes Spokane north to south, and from Airway Heights all the way to Liberty Lake. However, if demand and market conditions warranted it, we might consider growing beyond those boundaries.”

Makinson also says he’s open to the possibility of working with mixed-use buildings on a case-by-case basis.

“We’re used to commercial spaces, which have a lower tenant turnover,” he says. “Mixed uses is a different animal because they combine commercial and residential. It’s possible to start a recycling program, but it’s just a bit more complicated.”

Makinson says most people are happy to recycle as long as it’s convenient to do so, and he’s seen young and old employees getting enthusiastic about starting a recycling program at their office.

“Some of the younger employees really enjoy working for companies that care about the environment. They feel it represents their values,” he says. “But I also see seasoned employees who’ve previously been smuggling recyclables from the office to home, who’re relieved to see a program starting. I’ve found they’re sometimes the most passionate recyclers of all.”

In his daily travels, Makinson says he’s already seeing signs that his business is having an impact on the community.

“I’m seeing smaller dumpsters and larger recycling bins, and even those little things help me feel we’re connecting with people locally,” he says. “By the end of 2017, we expect to be diverting enough material from the landfill to fill a 1 mile long train each year.”