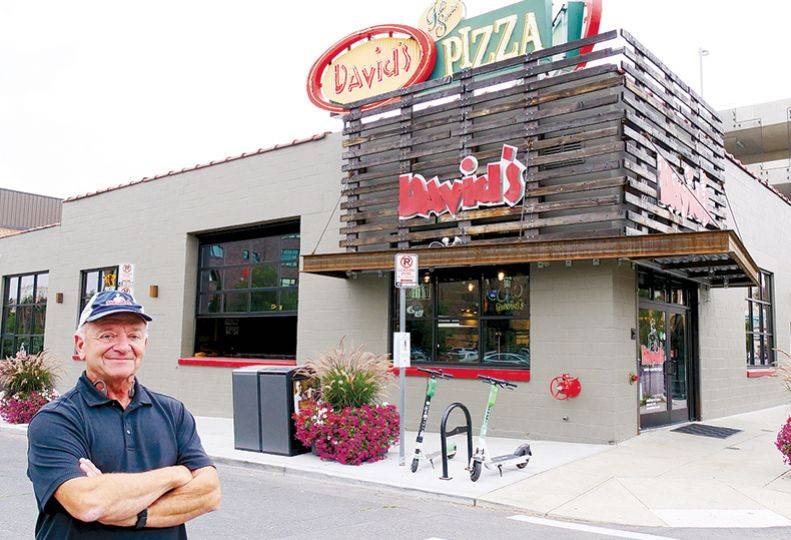 -—Karina Elias
David’s Pizza owner Mark Starr says his restaurant is one of a few near downtown that is seeing an increase in foot traffic.

The lingering effects of the pandemic on downtown restaurants are continuing to weigh down the industry, as office-employee foot traffic has been slow to return to the city core, several restaurant owners and representatives here say.

The struggles are forcing some restaurant owners to reinvent their menus and their venues to try to stay in business.

Liberty Lake-based Eat Good Group LLC, for example, has closed the Incrediburger & Eggs brick-and-mortar restaurant, located at 909 W. First, although a food truck will continue to operate under that name.

Adam Hegsted, chef and owner of the Eat Good Group, says the location is being turned into a Spanish tapas bar with evening hours to attract the heavier evening foot traffic. It’s set to open in mid-September.

“Incrediburger was more of a lunch-based restaurant,” explains Hegsted. “Ever since COVID, we’ve struggled to get that lunch crowd back. Maybe it’s just not as many people working downtown.”

Hegsted says the Spanish tapas will be made with local ingredients, and the restaurant will operate from 4 p.m. to midnight. In January, Hegsted plans to renew the lease of the space.

Chad White is a local chef and owner who opened High Tide Lobster Bar inside the Wonder Building in 2019 and closed it in February of this year due to rising costs of lobster and other products.

“We tried to hold out as much as we could without raising prices, hoping things would go down,” White says.

He says that sentiment is shared by many operators who prefer to tighten their profit margins rather than raise prices too quickly and risk losing customers.

White says that for his lobster rolls to have met the industry standard for profit margin, he would have had to sell them for $59 today.

Because White is still tied to his contract lease at the Wonder Building and continuing to pay his monthly rent, he changed the lobster bar to a taco stand, called Uno Mas.

“I could either walk away from the lease and face a possible lawsuit or have to pay the remainder part of my lease off … or I could pivot and turn High Tide into Uno Mas with little financial effort,” White says.

Ethan Stowell, chef and owner of Tavolata, at 221 N. Wall, in River Park Square, and Victory Burger, located inside The Wonder Building, at 835 N Post, says both of his eateries are performing at about a 25% lower rate than expected in terms of revenue. He points to fewer people venturing downtown since the pandemic as the main reason for the slowdown.

“Downtown Spokane has not repopulated with office workers,” he says. “It’s a dramatic change.”

Stowell is the CEO & founder of the Seattle-based Ethan Stowell Restaurants. He explains that when he decided to expand his business into Spokane, he desired to be downtown and specifically near Riverfront Park. He signed his two multiyear leases before the onset of the pandemic and opened Tavolata restaurant with two event spaces that saw no activity during the height of the pandemic.

Emilie Cameron, president and CEO of the Downtown Spokane Partnership, says the number of pedestrians classified as employees downtown is down 23% this July, compared with the pre-pandemic numbers of July 2019.

Cameron adds that numbers are improving each year, with the employee traffic count 28% higher than during the year-earlier month.

While foot traffic in much of the downtown core hasn’t returned, some restaurants in the North Bank have benefitted from concerts and events at the new Podium athletic facility, the Spokane Veterans Memorial Arena, and the Pavilion in Riverfront Park, which generate high volumes of such traffic.

Mark Starr, owner of David’s Pizza, located at 803 W. Mallon, says that 2022 has been a “phenomenal year with people out and about.”

Starr says 2019 was the best year David’s Pizza has had in terms of revenue. This year, the pizzeria is set to surpass that revenue, he says.

“It’s (because) of concerts at the Pavilion, graduations at the Podium, the Arena being one to two blocks away,” Starr says. He also notes that a parking garage near the Wonder Building accommodates 400 cars, providing another concentration of foot traffic.

While a lack of office workers has impacted most restaurants in the downtown core, operators and owners agree that the industry also is struggling with the slow rate of their own employees returning to work, rising inflation, supply-chain issues, and higher gas prices.

Stowell, who claims his restaurant group historically has had little turnover, currently is having difficulty enticing employees to return to work and hiring new employees.

“Right now is way harder than the pandemic was,” he says.

Anthony Anton, president and CEO of the Olympia-based industry group Washington Hospitality Association, points out that on average, restaurants statewide have accrued $160,000 in debt.

Anton says restaurant operators had hoped for relief this year through the proposed $40 billion federal refunding of the Restaurant Revitalization Fund, but it failed to pass Congress in June.

“For restaurants that were running debt, their clock has run out,” says Anton.

He further explains that most restaurants make $40,000 in profit per year, and it would take three to four years to repay the $160,000 debt incurred during COVID, without taking home an income.

Stowell says it’s getting more difficult for many restaurants to continue to operate.

“The replenishment of the Restaurant Revitalization Fund would have saved a lot of restaurants,” he says. “There is a lot of thinking, ‘I just went through 2 1/2 years of hell, why am I doing this?’”

“That’s hardly enough to live on,” he says.