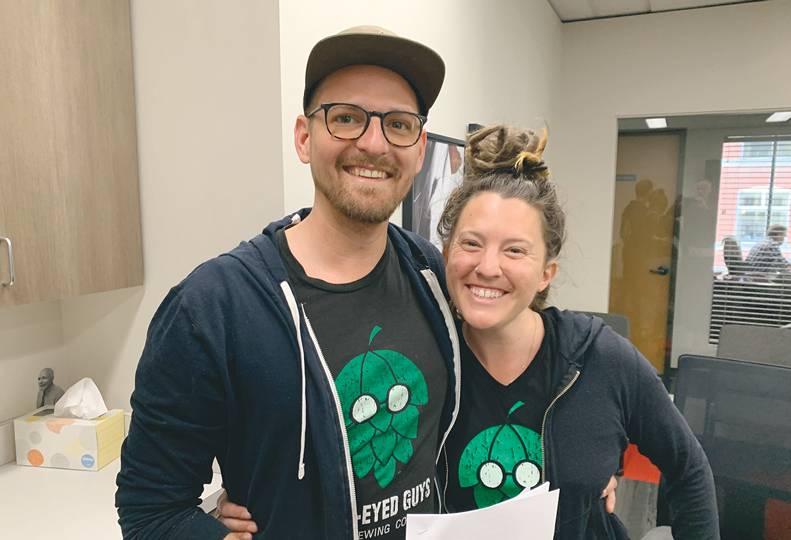 -Provided by Alex Rausch
Alex and Hillary Rausch pose after signing the lease for the space for their new brewery, which will be located at 910 W. Indiana, in northwest Spokane.

The couple, who founded Four Eyed Guys Brewing Co. in 2017, say they hope to begin remodeling this month for a planned tap house and brewery to be located at 910 W. Indiana, near the northeast corner of Indiana Avenue and Monroe Street, in the Emerson Garfield neighborhood.

The Rausches hope to be able to debut the tap house and brewery to the public next month.

“But between licensing and the COVID-19, that might be a little overly optimistic,” he says.

The nearly 1,600-square-foot space formerly was occupied by a thrift store in a part of a small retail mall about a quarter-mile west of the North Central High School campus.

“It’s not a huge location; seating capacity will be about 30,” Rausch says.

As stay-at-home orders to fight COVID-19 have relaxed in recent weeks, a smaller location could be beneficial at the outset, Rausch says.

“We started brewing beer in 2017 and debuted small batches, always with the intention of being able to open a tap house,” he says. “Even though we’d been brewing beer and built a bit of a fan base over the last three years, the idea of trying to get a tap house and brewery up and running during a global pandemic seemed daunting.”

However, Rausch says he and his wife received “overwhelming help and support” from the building’s owner, who they say created an opportunity for them.

“We were able to use this time and turn it into something positive,” he says.

As the couple awaited a closer return to a semblance of normalcy since signing a lease with the building’s owner, they’ve spent the last several weeks collaborating with other breweries to learn about what makes a successful tap house.

“It’s our goal to create a location where people will want to come and spend time with each other,” Rausch says. “Who knows? When this is all over, we might discover that this was an ideal time to build a business.”

Brian Northcraft and his brother, Rusty, co-owners of Uncle Rusty’s Diner near downtown Spokane, say they still have aspirations to set up a Spokane Valley restaurant, after the restaurant they planned to open at 18723 E. Cataldo was destroyed by fire on May 24.

Brian Northcraft says Spokane Valley fire investigators determined arson was the cause of the early morning blaze at the structure off Barker Road.

The brothers had planned to open their second restaurant – the site of a former GTX Truck Stop—this month.

“We had just finished the floors and were nearly ready to go,” Northcraft says. “Our goal was to kind of be able to have the restaurant open during Phase 3 of the Governor’s re-opening plan.”

Northcraft says he and his brother will continue to look for another building in that area, but acknowledges it will be challenging, as there aren’t many buildings in that area that were previously restaurants.

The brothers kept Uncle Rusty’s open for takeout during stay-at-home orders and managed to generate some income.

North of downtown, the co-owners of Party Palace, Dan Duncan and his wife, Michelle, say they’re closing the business located at 2607 N. Division after 32 years of operation.

The Duncans have listed for sale the 7,700-square-foot multitenant building they had constructed for the business in 1998. The couple currently have two other rent-paying tenants there.

Michelle Duncan says even before the pandemic emerged, the couple began preparing for other endeavors.

“The property sold in March, but then, when COVID-19 hit, the buyers backed out of the deal,” she says.

The company is in the process of liquidating its inventory.

“We’ve already sold our entire Halloween inventory, but party supplies, decorations, gift cards are still available for all the remaining holidays,” she says.

Dan Duncan already has transitioned out of the business as he currently works as a full-time groundskeeper at Qualchan Golf Course.