Blue Zoo prepares to dive in with Spokane aquarium attraction 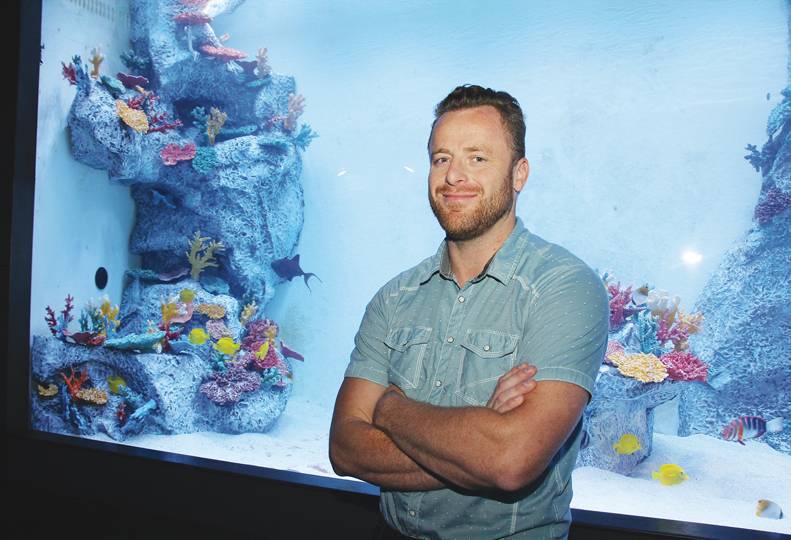 It’s easy to imagine the gleeful laughter of children as they run from display to display, their faces awash in blue light, pressed up against cold glass as bright yellow fish flick past their noses.

That’s the feeling one gets as they stand within the NorthTown Mall’s newest tenant, an interactive aquarium dubbed Blue Zoo, despite the rumble of power tools in the next room as workers finish building the multitude of planned displays that are expected to open by the end of July.

That feeling is embodied by owner Wesley Haws, who recently guided the Journal on a tour of the facility while describing the displays and exuding passion for the business he started.

Haws says his passion for aquariums started while he was recuperating from a traumatic injury to his skull.

Haws previously worked building dome houses around the globe before starting a large farming operation in Ethiopia. During his time in Ethiopia, he says he was attacked by a villager who struck him in the back of his head with a wood ax.

“I had brain surgeries, a long recovery,” he says. “I am half blind, I lost the left occipital lobe, and it took a long time to recover. It was over two years before I did anything.”

It was the chemistry, learning about different fish, and figuring out how to make a coral reef that helped him re-engage with the world, he says.

“It really engaged me back in life, which was a big deal to me, because I went from running big projects to nothing,” he says.

Now, he wants to pass that passion for aquatic life onto others and provide an educational and fun attraction for the people of Spokane in the hope of inspiring younger generations to marine conservation.

He chose the mall because of the availability of space and the changing technology that would allow for an aquarium to be built in the space.

“Malls are dying. There are a lot of empty spaces and they need traffic,” he says.

He hopes attractions like Blue Zoo can breathe new life into malls.

“You can come and have a fun time with your family,” Haws says. “It’s a lot cheaper than a public aquarium, a big public aquarium that you have to drive to Seattle for.”

The filtration technology has also gotten much smaller and more efficient, meaning that one can set up larger tanks in smaller areas.

Blue Zoo is located on the first floor of the NorthTown Mall, near Buffalo Wild Wings. Guests will enter in the gift shop, where they’ll buy tickets before being ushered into the welcome room to watch a short three- to five-minute video about Haws’ past and the history of Blue Zoo.

Tickets will be about the price of a movie, says Haws, or between $13 and $15, unless an annual pass is purchased, which costs between $150 and $200. Annual passes are already available at a pre-opening discount he says. Blue Zoo already has sold about $60,000 worth of annual passes, says Haws.

There will be a birthday party room that has an occupancy of 35 people, Haws says, as well as a movie theater that will show videos every 30 minutes.

Blue Zoo currently has between 10 and 15 birthday parties already scheduled for the month of August, he says.

Some of the videos will be for kids, and others will be 30-minute snippets of documentaries that Haws purchased from films like Planet Earth.

Guests then will enter a room awash with blue light, with a massive fish-only saltwater tank to the right, a wave pool where kids can turn a knob and learn about waves in the ocean to the left, and two more tanks, one a coral reef tank where a small white fish is busy digging away in the sand, the other home to pufferfish, lionfish, and eels — the predator fish.

The aquarium will house hundreds of different species, with tanks for jellyfish, seahorses, a harem of clownfish living in sea anemone, and a giant Pacific octopus straight from the Puget Sound that Haws anticipates will be a fan favorite.

Along the far wall are three vision-focused tanks sponsored by Spokane Eye Care, he says, which house mantis shrimp - which have the best eyesight in the world — the rhinoceros scorpion fish that looks like a rock that guests can try to spy, and the cuttlefish, which have large W-shaped pupils.

Past the octopus, the room opens into a brightly lit area filled with touch pools and tanks where guests can pet or feed stingrays, urchins, and starfish.

Just around the corner is a massive shark tank that will house at least eight sharks, he says, some of which can grow up to 150 pounds and 6 feet in length.

“They’ll start out pretty small,” he says. “But they’ll all grow … that’s why we can only get eight.”

Eventually, Blue Zoo will hold a shark feeding show, he says, but first employees need to be trained.

Taking up a large portion of the 15,000-square-foot space will be a 24-foot pirate ship playground for children, Haws says. Blue Zoo will hold a pirate show and a mermaid show — where the employees will swim in the tanks — a couple of times a week.

About 35 to 40 employees have already been hired, he says, though he expects to hire at least 14 more, for 53 to 54 total employees.

There also will be a large interactive kids table that will depict the city of Spokane, and why its work building large tanks to keep from dumping excess water into the ocean is important, he says. It will have clouds that rain water down the mountains and into a reservoir, past the Maple Street Bridge, and into another reservoir, he says.

“It’s pretty cool,” says Haws. “We’re having it manufactured. It’s a very fancy kids table. That table alone was about $80,000. It has lots of stuff for the kids to play and interact with.”

Other attractions include a virtual reality room where guests can swim with sharks, a reptile room with an assortment of lizards and turtles, and a bird room that will house about 300 parakeets that guests can interact with.

Also included will be poison dart frog exhibit, an insect wall, and a python named Larry, who is currently about 9 feet long and weighs 50 pounds but will grow up to 23 feet long, says Haws.

There will be an archer fish tank where guests watch the fish shoot crickets off leaves with jets of water, a discus fish tank, and an electric eel tank.

Then comes a tank full of manicure fish that nibble on dead skin cells, and the axolotl tank, with odd amphibians that look like a lizard-fish hybrid with their lungs on the outside of their bodies.

At the end of the loop is a large Amazon River tank filled with some of the larger species of fish that populate the mighty South American river.

This will be the second Blue Zoo site, says Haws, the first of which is in his hometown, Idaho Falls. Haws says he and a partner purchased a movie theater that had been abandoned for 16 years and worked with volunteers to build a small public aquarium.

Following the success at that location, which Haws attributes to the growing trend of millennials and the younger generations choosing experiences over material items, he says he hired a research company to find other locations that would benefit from an attraction like his.

“I wanted every place that had over a million people within 50 miles that didn’t have an aquarium within 200 miles,” he says. “There were 62 spots in America. So, I picked the two closest ones, Reno and Spokane, and started looking into them.”

He currently has five partners, some of whom will stay in Spokane and manage the Blue Zoo here, while he moves on to start building the next one.

Haws says he is currently in discussions with mall companies in Reno, Nevada, and Indianapolis, Indiana, for the next two Blue Zoo locations. He is also in talks with two other major mall companies; however, he declines to disclose details until a deal is made.