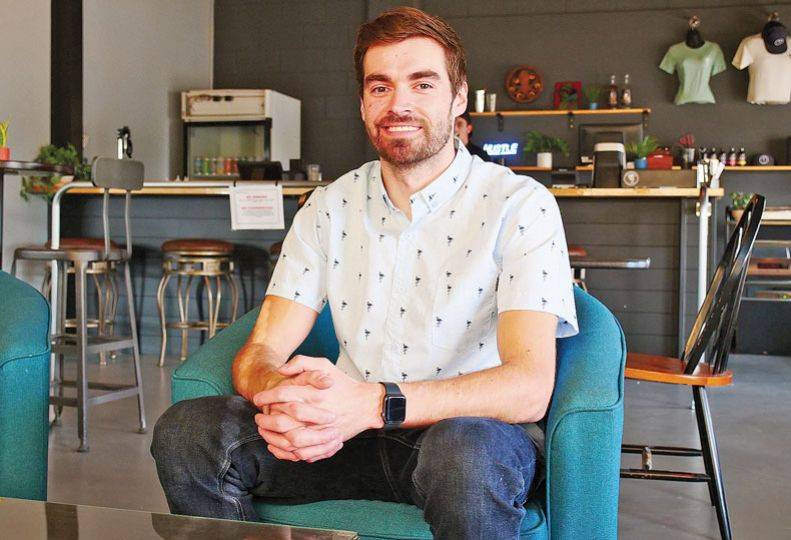 -—Virginia Thomas
Dillon Hueser opened The Boneyard after discovering demand for his mocktails while selling Side Hustle Syrups products at Spokane-area farmers markets.

An all-ages lounge in Spokane Valley is serving up craft cocktails and mocktails after its owner found demand at local farmers markets.

The beverage menu includes cocktails and nonalcoholic mocktails, such as the Spokane Mule, the Old Fashioned, and the White Linen. For the alcoholic drinks, whiskey, vodka, and gin are supplied by Spokane-based Dry Fly Distillery. All of the mixed drinks are made with Side Hustle Syrups. Simple syrup is a liquid sweetener made by dissolving sugar in water. It’s often used in cocktails, coffee, baked goods, and other foods and beverages.

Since 2020, Side Hustle Syrups has been selling bottled syrups and fresh craft mocktails at Spokane-area farmers markets. Hueser says selling at farmers markets provided the opportunity for consumers to see how to use the syrups, as well as taste the syrups in mocktails.

“Through that, I had this vision to have a tasting room or a lounge to offer that experience and to have a place for community,” Hueser says.

He envisioned an inclusive space, he says, that would be welcoming to adults, to young people seeking a social space, and to couples looking to include their children on an evening out.

“Our atmosphere is probably a little more on the adult side, but … kids get to feel like they're part of the fancy nature of things with a more craft-oriented beverage,” Hueser says. “Many people we saw at the markets enjoyed the nonalcoholic side of things. A lot of those clientele were sub-21-year-olds.”

In addition to cocktails and mocktails, The Boneyard also serves local beer and wine, as well as some light food options such as tacos and sandwiches.

Hueser says the space lacks a traditional kitchen, so all cooking is done through the sous vide method, which involves submerging plastic-wrapped, vacuum-sealed food in hot water.

“It's a carefully planned thing -- we're trying to mitigate waste, but it is prepared hours ahead of time, so it's a delicate balance,” Hueser says. “As we get further into the food side of things, we're going to keep integrating food that is hopefully locally sourced. We're revamping the menu as we grow.”

Hueser says live music is in The Boneyard’s future, but he doesn’t have specific plans yet.

Three employees, including two bartenders, will staff The Boneyard.

The 1,200-square-foot Boneyard space has been the manufacturing space for Side Hustle Syrup for a few years, and Hueser says he’s continuing to make syrups in a portion of the space separate from the lounge area.