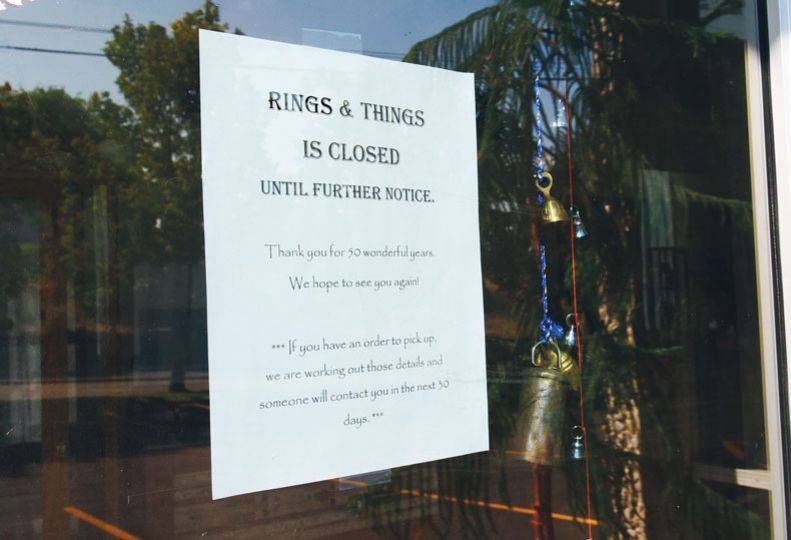 -—Virginia Thomas
A sign at Rings & Things says the company is closed until further notice, but a social media post states it’s shuttered for good.

After 50 years in business, Spokane jewelry component and bead wholesaler Rings & Things has closed its doors, and the company that operates it, NJWS Inc., filed for liquidation under Chapter 7 of the U.S. Bankruptcy Code.

A post on the Rings & Things Facebook page states the company shut down due to technical issues.

“Sadly, our system data is unrecoverable, and with it gone, Rings & Things is permanently closed,” the post says. “In the morning of Tuesday, August 15, we were happily shipping 50th anniversary sale orders, and by noon, we were dead in the water, with no way to even post anything on our website to explain.”

The post states the company is working with another long-term jewelry-parts supplier to shift its top items to them, and concludes with, “We regret being busy busy optimists … we did not have a functional backup in place.”

The Rings & Things warehouse showroom, located at 1011 E. Second, was shuttered during business hours on the afternoon of Sept. 19, with a sign on the door saying the business was closed until further notice. The company’s website was still accessible as of Sept. 20, but its shopping cart feature appeared disabled.

A representative of Rings & Things didn’t respond to a request for comment. David P. Gardner, an attorney with Spokane-based Winston Cashatt Lawyers who represented NJWS in the bankruptcy, confirms the Chapter 7 filing but declines to comment further.

According to the Chapter 7 filing, the company had gross revenue of $2 million last year.

Rings & Things began here in 1972 in a creative incubator called Second City. Company founder Russ Nobbs had started making jewelry in the 1960s and selling his creations at state fairs before starting a retail space. The company had a retail space in River Park Square for many years.

In 2000, Rings & Things closed the retail side of its business and began exclusively selling wholesale to its more than 40,000 clients. In 2004, the business remodeled and moved into a 40,000-square-foot building at 304 E. Second, near the eastern edge of downtown. At the time, Nobbs told the Journal Rings & Things was making between $5 million and $10 million in revenue per year.

Russ Nobbs handed the reins to his children, Polly LaRue and Skylar Nobbs, in 2014, shortly before he died. LaRue maintained 51% ownership, while Nobbs had 49% ownership in Rings & Things, according to the court filing.

Rings & Things moved in 2020 to its most recent warehouse and showroom space along Second Avenue.