The Senator Guitars to reconvene along Third 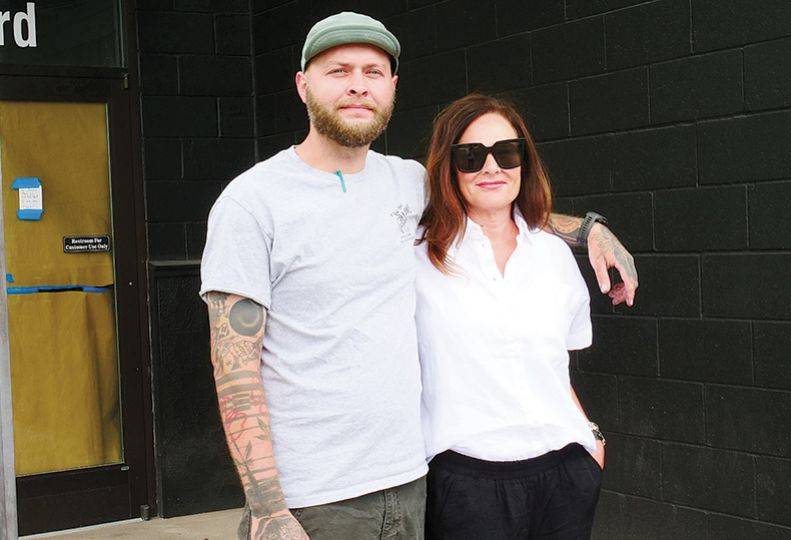 -—Virginia Thomas
The Senator Guitars shop owner Taylor Roff, pictured with his mom, Diane, is reopening the shop east of downtown Spokane. The Roffs own the building at 616 E. Third, where the shop will open.

A guitar store that closed two years ago is reopening in a space at 616 E. Third that will include artist studios and a metal fabrication shop.

Taylor Roff, owner of The Senator Guitars, says the guitar shop originally opened on north Monroe Street in 2016. However, the business closed in 2020.

“Somebody bought the building we were in … and pretty much kicked us out,” he says.

He says he took the opportunity to find a permanent space for The Senator.

“The end goal was always to get a piece of property,” he says. “It always works out better when you’re landlords, yourself.”

Taylor Roff’s parents, Diane and Mark Roff, bought the 5,100-square-foot building last summer at 616 E. Third through their business TCJ Roff LLC. Diane Roff says she has handled much of the bookkeeping for The Senator Guitars, and manages Taylor Roff’s other business, metal fabrication shop Empty Room Studios, which will occupy the north portion of the building.

Taylor Roff says he chose the building for its proximity to downtown and to Interstate 90.

“The really nice thing about it is that it has enough space for my business, and we have the opportunity to build practice spaces, which is definitely something Spokane is lacking,” he says.

Diane Roff says the rentable spaces will be available for a variety of uses, from massage therapy to music recording studios.

“We're going to have them all soundproofed, so people can record, give music lessons, or have band practice,” she says. “There'll be a main entry door that they will all have fob keys to, so they can access their space 24 hours a day.”

“Some artists work best in the middle of the night,” he says.

The space could be a catalyst for collaboration, he says.

“The dream of any artist is to be able to have some kind of space that not only helps you create your art, but also can help other people create their art,” he says. “We hopefully have a space that brings artists together who normally wouldn't have met, and maybe they can create something together.”

Diane Roff says the interior of the building has been gutted, and walls will be constructed later this summer. Steven A. Meek Architects, of Spokane, designed the changes to the building. A contractor for the $300,000 remodeling project hasn’t been selected yet.

Taylor Roff says that The Senator Guitars, which will occupy 950 square feet, likely will focus more on used guitars and gear, such as effects pedals.

“I’m really big into trying to get people to modify their current guitars,” rather than spend money to buy new, he says.

The Empty Room Studios space will double as a place to repair and modify guitars.