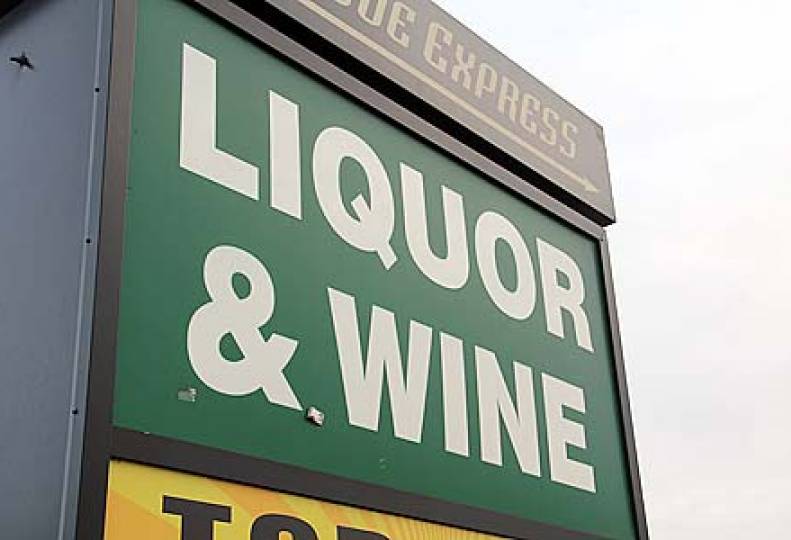 -- Staff photo by Kim Crompton
This sign beckons motorists to a state-operated liquor store at 5004 E. Sprague that is among the outlets here scheduled to close.

Spokane area-based grocery store chains aren't tipping their hand yet as to whether or how they plan to stock and market liquor, following Washington state voters' recent approval of Initiative 1183, which privatizes state liquor sales.

Executives for a couple of the chains say, though, that their customers will expect them to carry liquor and that there will be competitive reasons to do so.

"We want to be competitive in the marketplace," and to protect the company's market share, says Jeff Philipps, president and CEO of Rosauers Supermarkets Inc., which operates 21 grocery stores in the Inland Northwest, the bulk of them in Washington.

Although Rosauers executives recently have been just "trying to understand the bill and how it's going to be implemented," and haven't made any firm decisions, Philipps says he thinks Rosauers customers "are going to expect to see liquor" in the chain's stores.

The Washington Food Industry Association, which represents independent grocers such as Rosauers, opposed the initiative, contending the ability it would create for retailers to negotiate directly with dealers favor large national retailers. Philipps emphasizes the organization wasn't opposed to privatizing liquor sales, but rather how the initiative was worded.

Although Rosauers hasn't decided the specifics yet on how it will proceed, Philipps says, "Remerchandising every store to accommodate liquor is going to be a pretty significant undertaking." He also says he expects Rosauers "would be working toward full implementation of our plan," once those details are ironed out, by June 1, when retailers in the state legally can begin selling liquor.

He says he expects it will result in some added employment, including possibly for security.

"You can't give your neighbor that kind of competitive advantage. You have to be there with everyone else. That's what your customer wants," Morgan says.

He adds, though, that the chain has been inclined to take a wait-and-see approach before making too many definite plans, partly because of the likelihood of litigation challenging the initiative.

Among larger chains, there seems little doubt that the two stores here operated by Costco Wholesale Corp. will carry liquor, given that the Issaquah, Wash.-based company spent $22 million to help pass I-1183, a state record for initiative fundraising. Others expected to do so or being mentioned as likely liquor retailers include Safeway Inc., Albertsons Inc., and Fred Meyer Inc., which collectively operate close to 20 stores in Spokane County. The state Office of Financial Management estimated there are 1,428 potential liquor retailers statewide.

Brian Smith, a spokesman for the Washington State Liquor Control Board in Olympia, says one way to predict what stores will sell liquor is to look at those that already carry beer and wine and that meet the initiative's requirement of having at least 10,000 square feet of floor space.

Using Smith's approach, liquor also might be expected to show up, for example, on the shelves of several Grocery Outlets stores here, the Trader Joe's store on the South Hill, Bi-Mart stores in Deer Park and Cheney, and Denny's Harvest Foods in Medical Lake, among others.

Morgan was correct in his prediction that the approved privatization measure would trigger litigation. A union-spawned lawsuit filed recently in King County seeks to invalidate the initiative on the grounds that it violates the state constitution by addressing more than one subject, according to published reports.

United Food and Commercial Workers (UCFW) International Union Local 21, which represents state liquor-store workers, claims the initiative dealt with multiple subjects, including changing the laws for the sale of wine, changing the ability of the Liquor Control Board to regulate alcohol advertising, and creating new franchise protections for distributors, a Puget Sound Business Journal article said.

Meanwhile, though plans for the initiative's implementation are proceeding apace. Information on how to apply for all of the new license types created through the change in law can be found though the www.liq.wa.gov/transition/overview website page.

The Liquor Control Board must begin divesting itself from its current business operations next month. Distillers and spirits distributors can begin selling spirits directly to restaurants on March 1, and spirits retail license holders, as mentioned earlier, can do so on June 1.

Currently, Washington liquor stores either are operated by the state or are "contract" stores operated by independent owners and paid on commission by the Liquor Control Board. There are about 10 of each in Spokane County, judging by state records.