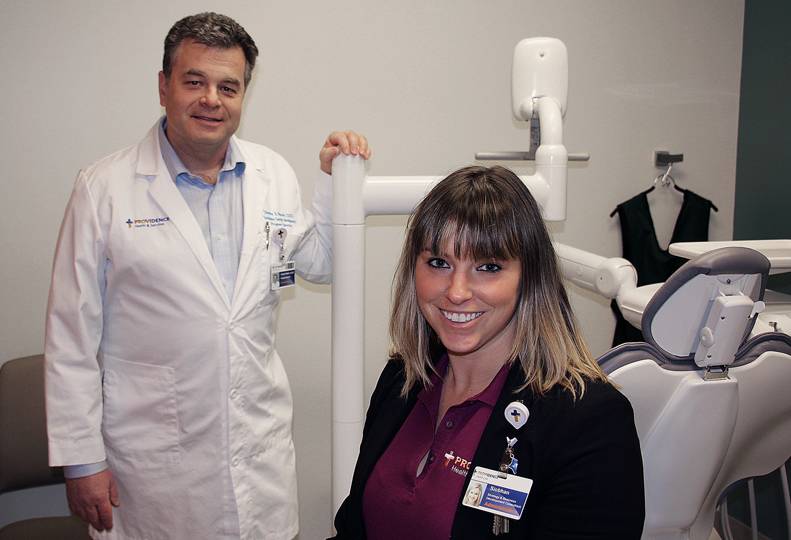 While it’s no secret that medical care is one of the biggest expenses for retirees, dental care is another health cost seniors might not be aware they should be saving for, some providers here say.

Although Medicare covers health expenses like hospital stays, doctor visits, and prescription drugs, it doesn’t cover dental care, which forces many seniors to either rethink how to pay for dental care costs, or simply go without.

Unfortunately, opting out of oral health care is a bad idea, in particular for seniors, says Dr. Timothy Naomi, a dentist with Providence Medical Group and director of Providence Health Care’s new dental residency program, which is set to start in July 2020.

“I suspect that oral health isn’t as big of a concern for people who are planning retirement as it should be,” says Naomi. “It’s a common fallacy that losing teeth is a normal part of aging, but if you see a dentist regularly there’s no reason you can’t reach age 103 and still have all your teeth.”

“For those over 65, coming in on a regular six- to eight-month basis is still very important, because as we reach those later decades of life, we become more prone to certain oral health issues,” he says. “And it’s always more expensive and time consuming to fix problems later, rather than working to prevent them.”

While there are many barriers preventing seniors from seeking dental care, Naomi says cost is a big factor.

“A fair number of elderly patients we see are eligible for Medicaid due to medical issues and financial constraints,” he says. “Unfortunately, there are others who don’t qualify for Medicaid and Medicare doesn’t cover dental care. It’s a real issue for these patients, many of whom are already on fixed incomes, and it’s not one that’s easy to solve.”

Because of the costs involved, Naomi says it’s not unusual to see patients making decisions based on the level of care they can afford.

“We do see patients who’ll choose an extraction rather than a root canal, or a denture rather than an implant,” he says. “When treatment is costly, you do end up seeing more cases of what we call compromise or palliative type care.”

Naomi says many of the scenarios he sees in which the cost of dental care is unexpected are those where the patient is living in a skilled nursing facility.

“Most of those patients are people who aren’t capable of performing their own oral hygiene routine,” he says. “Unfortunately, in many nursing facilities oral health care is less than optimal, so when the patient’s family is able to bring them to us for an appointment, issues stemming from a lack of care come up all at once, and they can be unexpectedly costly.”

Naomi says elderly patients also might have medical conditions that require medications that produce oral side effects like dry mouth, another factor contributing to oral disease.

“The trouble is that saliva doesn’t just lubricate, it also has immune complexes in it to help fight oral diseases, so, a dry mouth increases the risk of that for patients taking those medications,” he says.

Naomi says certain existing health conditions like diabetes can be compounded by oral health issues like gum disease, an infection and inflammation of the gums.

“For diabetic patients the big thing is getting their blood sugar under control, which is made more difficult with the presence of chronic infection like gum disease,” he says. “It’s not infrequent to see patients admitted for high blood sugar who have oral health issues they need to consult with us on.”

While some nursing facilities are able to bring in a visiting dentist for exams, and possibly even a dental hygienist for cleanings, Naomi says most of these visits aren’t able to comprehensively address a patient’s needs.

“They can identify issues, but there’s nowhere for the patient to go for follow-up work or more involved procedures,” he says.

Naomi says issues with transportation and needs for more complex procedures are also barriers to for seniors seeking dental care.

“Many seniors struggle with access to transportation to get to and from an appointment,” he says. “It can also be hard to find a dentist who is able to treat older patients.”

Naomi says many dental offices, particularly rural facilities, either aren’t equipped to accommodate more specialized procedures, or their staffs aren’t trained in working with elderly patients who have dementia or other complicating health conditions.

“It’s very much a comfort-zone issue,” he says. “If that facility’s staff doesn’t feel it has the resources to accommodate a patient, that patient has to look elsewhere for care. The trouble is there’s nowhere else to go.”

“In some cases, the premiums you pay are equal to or greater than initial coverage, so it may be a better option to instead start a separate savings account for dental care,” she says. “Sometimes when a patient needs a more advanced procedure done, we’re able to refer them to a local clinic like CHAS health, which can offer services on a sliding fee scale.”

“Some low-income seniors who are eligible for both Medicare and Medicaid can also take advantage of special-needs plans that offer dental services,” she adds.

When it comes to senior dental care, Bouchard says the program also works closely with the Arcora Foundation, a nonprofit organization formed by Delta Dental of Washington, in its efforts to help Washington seniors access dental care more readily.

“The Arcora Foundation conducted recent surveys regarding oral health disparities and discovered about 45 percent of seniors have some kind of difficulty with their teeth,” she says. “The Arcora Foundation is working on several initiatives here and across Washington that are designed to help those populations.”

Arcora estimates more than 480,000 seniors 65 years and older in Washington state don’t have any dental coverage.

Naomi says Providence’s new dental residency program, which received some funding through the Arcora Foundation, was created in part to help eliminate the current gap in care for Medicaid adults and seniors.

“We’ll have faculty here that can care for patients with special needs, including seniors,” he says. “This program will focus on training dentists to be able to go out into the community with the ability and help care for those patients that have difficulty finding care elsewhere.”

As the Journal reported in February, Providence is partnering with nonprofit health services provider Community Health Association of Spokane on a $3.5 million remodel of a medical office building in north Spokane that will serve as one of two sites for the new dental residency program.

Naomi says Providence is already hiring staff for the other site, a newly created dental clinic space in the Sacred Heart Doctors building at 105 W. Eighth, which is expected to be ready to open by May 1.

Meanwhile, he says, the North Side CHAS clinic should be completed in late summer or early fall, and the new dental residency program is on schedule to begin in July of 2020, provided it receives the necessary accreditation.

“We submitted our accreditation application through the Commission on Dental Accreditation in November and have been assigned a site visit date to take place in August,” he says. “If all goes well, we should receive our provisional accreditation in January.”

Siobhan Whitney, strategy and business development consultant with Providence, says the health provider has also partnered with the Arcora Foundation to fund a new tele-dental program that will provide more location-specific services like exams, radiographs, and imaging, to seniors that struggle with transportation.

As part of Providence’s work with SmileSpokane on its Increasing Access initiative, the tele-dental program enables seniors to set up an appointment  at a location that’s convenient for them. The program is meant to eliminate transportation barriers and increase senior’s access to dental care.

SmileSpokane is a community organization that was formed in 2015, with the goal of improving oral health throughout the Spokane area.