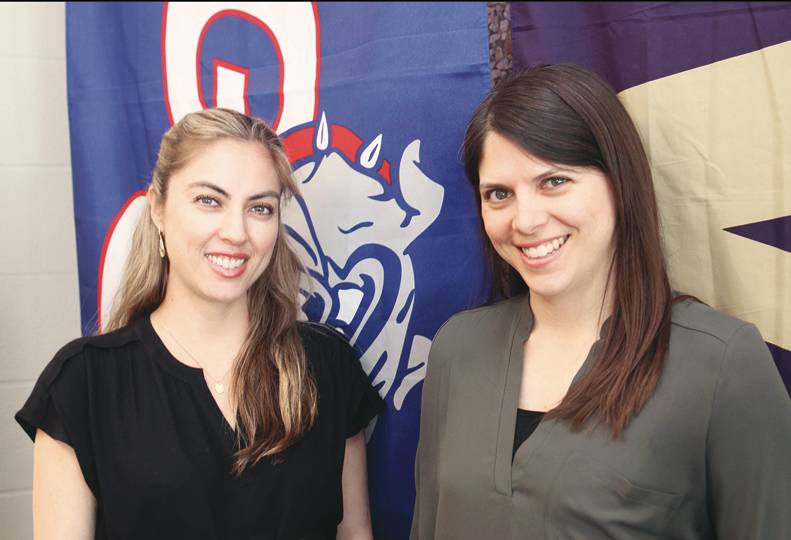 -—Kevin Blocker
Drs. Allison Lambert, left, and Janelle Clauser are among the faculty members at the University of Washington’s medical school here.

By his own admission, Dr. Darryl Potyk, the chief of medical education for the University of Washington School of Medicine-Gonzaga University Regional Health Partnership, tends to approach situations—and people—in cautious fashion.

So upon first meeting UW medical instructors Drs. Janelle Clauser and Allison Lambert, Potyk says he was “guardedly optimistic” about their potential as doctors and professors.

“Clearly, they’re very competent. But I was cautious about jumping on their bandwagon too early. But after watching them for a while, it didn’t take long for me to get on board,” Potyk says.

Potyk also serves as associate dean for the UW’s School of Medicine in Eastern Washington, and is the associate program director of the Providence Internal Medicine Residency Clinic, located at 624 E. Front.

Potyk nominated Clauser and Lambert for the Journal of Business’ 2017 Rising Stars, citing them as two people he thinks will have future impacts on Spokane’s medical and academic communities.

“I believe that they will both make significant contributions to our community in the years to come,” Potyk says.

Of Clauser, he says, “First and foremost, she’s an excellent physician. She’s passionate about medical education, and she’s an incredible role model for med school students.”

Potyk says Clauser has the ability to survey the landscape of the continuously changing medical profession.

“As time passes, I clearly see her moving into more leadership roles and emerging here because she advocates strongly for both education and her patients,” he says.

A native of the East Bay area in Northern California, Clauser earned a bachelor’s degree in neurobiology, physiology, and behavior—a single degree commonly identified as NPB, she says.

She earned a doctorate at Loma Linda University’s medical school, before completing a four-year residency at Georgetown University, in Washington, D.C., where she became board certified to practice internal medicine and pediatrics, she says.

As a resident, her teaching skills were immediately recognized, resulting in her being presented Georgetown’s prestigious “String of Pearls Teaching Award.”

Georgetown hired her to a faculty position after her residency, and in less than three months, appointed her to the position of associate director for pediatrics residency.

Clauser, 37, and her husband, Jeff Klein an Edwall, Wash. native, have two children. And with her family in California and his here, they decided they wanted to be closer to at least one side of the family. Sacred Heart Medical Center hired Clauser as a hospitalist to its internal medicine and pediatrics teams in 2012, she says.

“It’s a great job, but I also wanted to get back into teaching,” Clauser says.

UW hired her not long after she arrived in Spokane. It turns out that practicing and teaching medicine are both her dream jobs, she says.

“I love being able to have an influence on medical education,” Clauser says. “Being able to be in both jobs is so important for my professional fulfillment.”

Clauser spends half her time working as a hospitalist and the other half as an instructor at the UW Medical School. Her duties with the medical school, which occupies space in the Schoenberg Center, are split between instructing and administrative work, she says.

She maintains her own office in the Schoenberg Center and shares office space with other hospitalists at Sacred Heart, she says.

As for Lambert, a 36-year-old Spokane native, Potyk calls her a “tremendous clinician,” who works in intensive care unit settings.

“What sets Allison apart is her passion toward research,” he says. “She is immensely dedicated to making the world a better place through research.”

Lambert graduated from Gonzaga Preparatory School in 1999. She earned her bachelor’s degree in chemical engineering from the Massachusetts Institute of Technology.

Lambert then went to Icahn School of Medicine at Mount Sinai in New York and completed a three-year residency in internal medicine, she says.

She went on to complete a master’s in health science at Johns Hopkins University School of Medicine, in Baltimore, while receiving additional fellowship training in pulmonary medicine and critical care. Lambert completed her formal training in 2015 before joining the faculty at Johns Hopkins.

“We’re very fortunate that Dr. Lambert has returned to her hometown,” Potyk says.

Currently, Lambert works as a clinical instructor of medicine in the UW School of Medicine. She teaches pulmonary, epidemiology, and biostatistics, and is also a medical student research adviser.

Additionally, Lambert is under contract at both Providence Holy Family Hospital and Providence Sacred Heart Medical Center, working as an emergency room physician for a total of eight weeks per year between the two facilities.

In the next academic year, Lambert says she will spend 25 percent of her time at the two hospitals, 25 percent as an instructor at the medical school, another quarter conducting research and as a research adviser for the school, and 25 percent spent doing her own independent research.

She says she has a passion for research in the area of chronic obstructive pulmonary disease, most commonly referred to COPD, which is one of the most common lung conditions encountered today.

In May she was awarded a grant from the University of Washington’s Institute of Translational Health Sciences, which is focused on providing promising young investigators with infrastructure support in order to develop her original research further.

Lambert says her passion for research, however, is based on her desire to see patients benefit from the research.

“I enjoy taking care of patients in order to best manage their symptoms,” she says. “I still communicate frequently through email with past patients I had at Johns Hopkins. You begin to know them for more than their symptoms and conditions. You begin to learn birthdays, anniversaries, the names of their children and other family members.”

Lambert has high praise for both faculty and students at the UW med school.

“This is a vibrant and inquisitive environment where my peers—and students—force me to learn something new every day.”