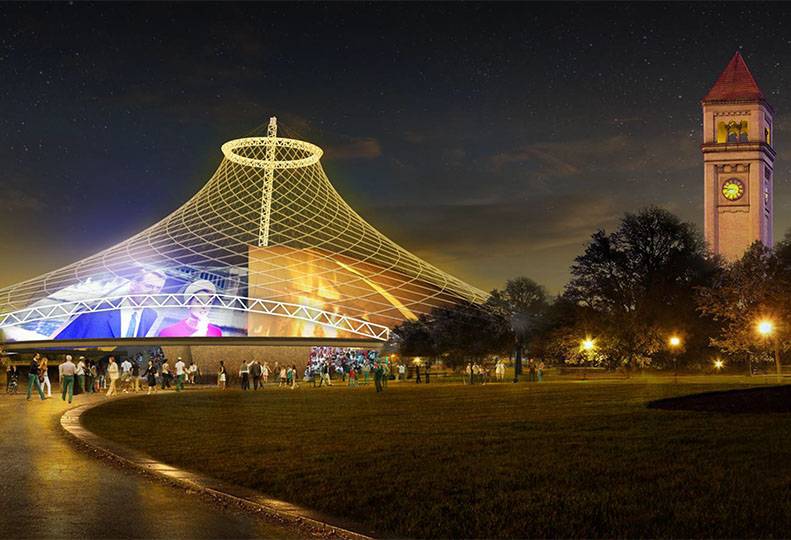 -—Olson Kundig Architects
Concepts to update the Pavilion beneath the iconic cable structure could include installing a dome canopy. 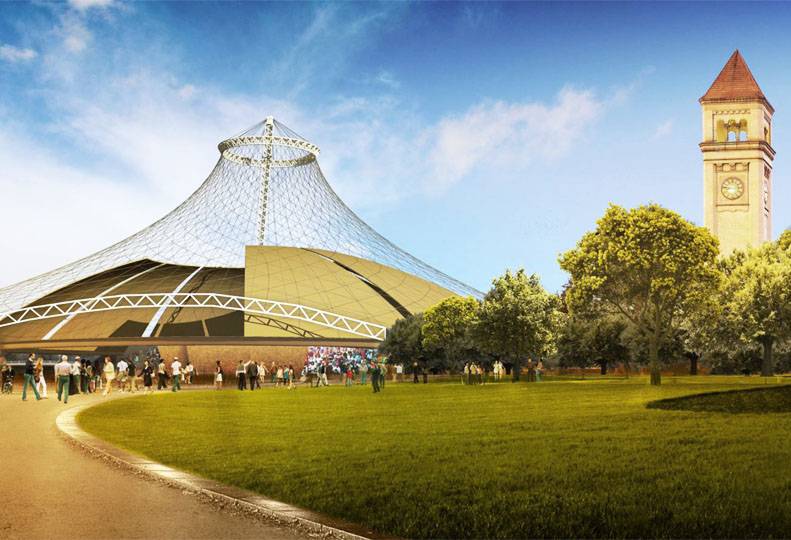 ---Olson Kundig Architects
Concepts to update the Pavilion beneath the iconic cable structure could include installing a dome canopy. 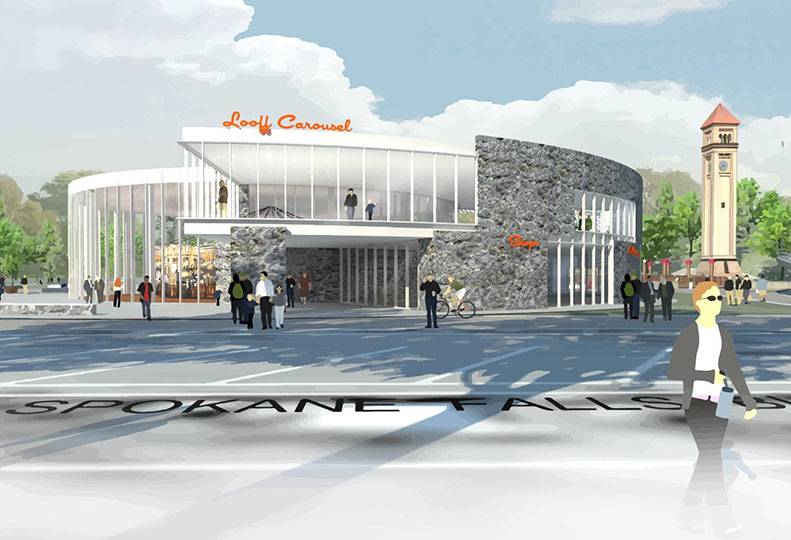 -—NAC|Architecture
A new structure for the Looff Carrousel would add space to hold parties and create an observation area where people could watch restoration of the carrousel horses, among other features. 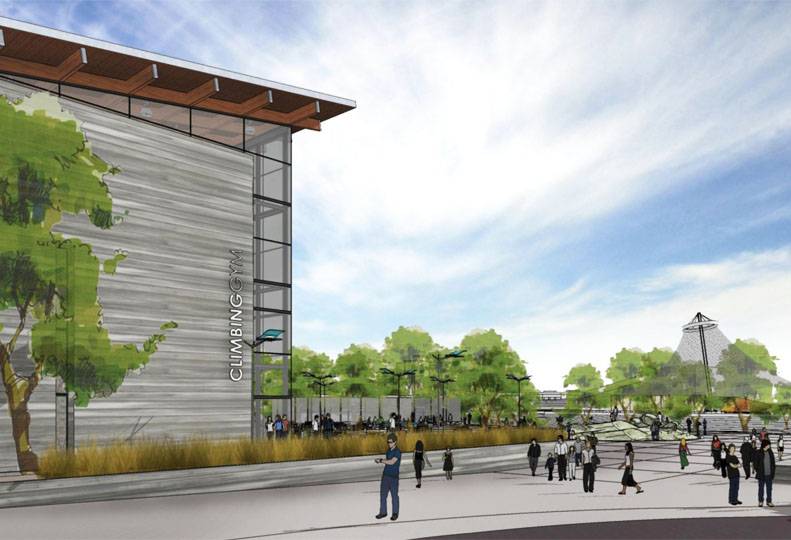 -Nystrom+Olson Architecture
A private developer has proposed a climbing gym for the north bank portion of Riverfront Park. 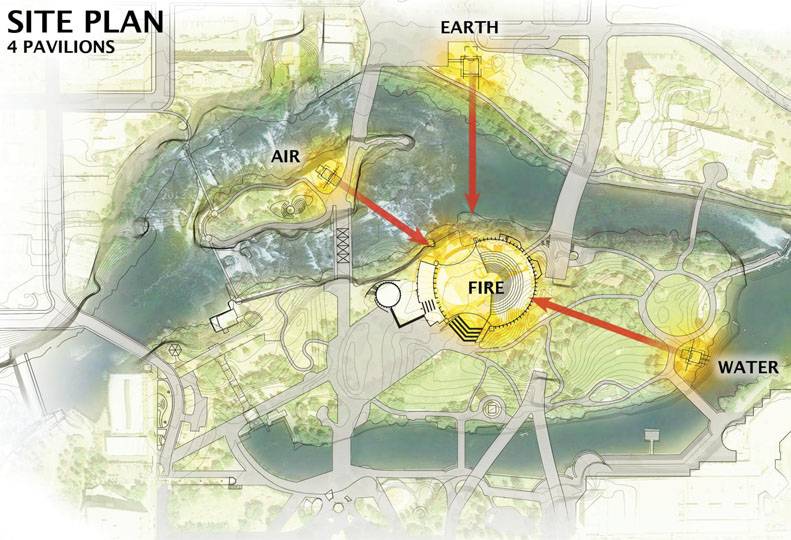 ---Olson Kundig Architects
One proposal calls for an earth-element theme for the Pavilion and new neighboring structures. 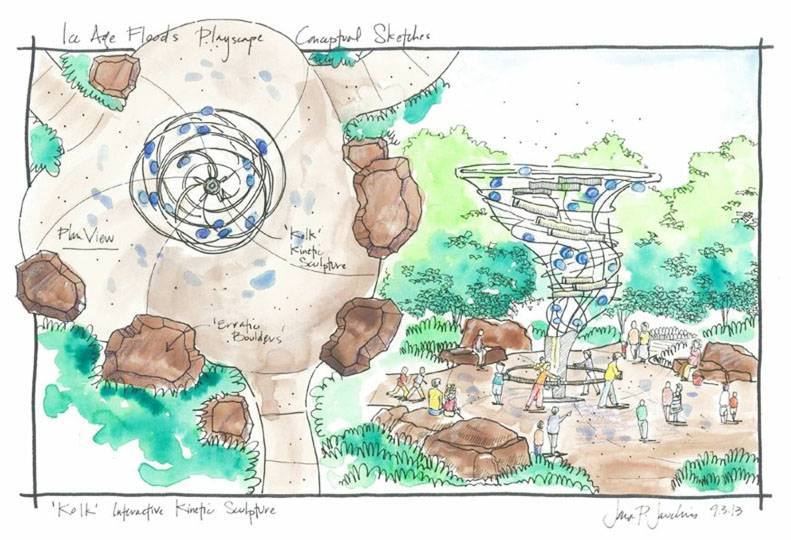 Conceptual drawings of potential improvements to Spokane’s Riverfront Park depict a 22,000-square-foot carrousel building. Beneath the iconic cable structure of the Pavilion, a dome canopy with movable parts would open to the sky or close for shelter. The dome’s panels also could display event-themed light shows or outdoor movies.

Another concept on the drawing table as part of the downtown park’s master plan discussions would create four separate pavilion shelters around the park, themed for the elements of air, earth, water, and fire. The main Pavilion would represent fire, or the hearth of the community, as a central amphitheater meeting place.

Juliet Sinisterra, the park’s master plan project manager, says a master plan advisory committee received about 25 such “programmatic themes” for ideas to improve the park. The 20-member group is scheduled on March 20 to prioritize the proposed concepts and to submit its recommendations to the Spokane Park Board.

The Park Board will hear the committee’s priorities in April and is expected to vote in May on final details for the master plan after public hearings. It also plans to present a bond measure to voters by November that would pay for improvements to the 100-acre park.

“Consultants are developing conceptual ideas that may or may not be part of the bond issue,” Sinisterra says. “We also just completed a telephone survey of 400 households about the master plan and the park, and we will be incorporating some of that into the prioritization.”

She says the advisory committee needs to finalize a few remaining decisions by next week. The questions include where to locate the ice palace, what to do with the IMAX building, and where to build a new structure for the Looff Carrousel, although the carrousel is expected to remain close to where it is today.

NAC|Architecture, of Spokane, has developed renderings for a carrousel building that would include an expanded area for parties and corporate events and an observation space where people can watch restoration upkeep for the carrousel horses. Concepts also call for a space to display history about the attraction and of its creator, Charles Looff, a prominent builder of hand-carved carrousels and amusement rides in America.

The IMAX, on the other hand, has some renderings that suggest using it for food services, including a rooftop dining option. However, Sinisterra says the committee doesn’t seem to favor repurposing the building.

“Right now, the committee is not recommending that we restore IMAX, but members are still on the fence about what to do about the IMAX building,” she says. “This was just a study about, what if we look at a different use. There isn’t an easy direct use to go into that building.”

She adds, “We’ll see what the committee comes back with on March 20.”

That list of priorities is expected to go to the Park Board by April 10, followed by public hearings now scheduled on April 17 and 24. Both of the public hearings are to occur in front of the Park Board at 6 p.m. in the city council chambers in the lower level of City Hall, at 808 W. Spokane Falls Boulevard.

Overall, the committee has identified as a main goal the need to create Pavilion space for a central gathering place and to provide flexible amphitheater space for Hoopfest, Bloomsday, concerts, and other public events.

Olson Kundig Architects, of Seattle, developed conceptual drawings of ideas for the Pavilion that include the “kinetic dome” proposal mentioned earlier.

“Rather than recovering the Pavilion, what they’re proposing is that we explore a kinetic dome that would be located within the current Pavilion cabling structure,” Sinisterra says. “It has movable panels and it can open or close to the sky, depending on time of year, when you may want more or less sun or you might want to open it to the night sky.”

She adds, “It also provides a uniform canvas on which to project large-scale video images, so everything from outdoor movies to light shows choreographed with music. There is opportunity to have interactive elements that people could even access from their smartphones so it becomes a canvas for events.”

Other concepts for the park’s future include creating a stairway and observation tower for the Clock Tower, well-lit public walkways and improved parking, and a children’s playground with an Ice Age Floods theme.

A private developer has approached the city with the proposal to build a climbing gym in the North Bank area along the Spokane River that would meet requirements to attract regional, national, and international climbing competitions to Spokane. Nystrom Olson Inc., a Spokane architectural concern, provided renderings to the committee for a potential climbing gym that depicts a large glass-panel wall for the front of the building.

What the city Parks & Recreation department calls the North Bank includes just under 3 acres immediately north of the river that is considered part of Riverfront Park and now mostly is used for parking lots.

Integrus Architecture, of Spokane, also provided renderings for a feasibility study of interior improvements to the Clock Tower.

The park board is looking at all of the concepts as part of a business plan for the park that calculates revenues and costs, Sinisterra says.

After the advisory committee recommends its priorities, Sinisterra says she expects to have cost estimates in a draft master plan in mid-April.

She says the idea to create four pavilions representing air, earth, fire, and water developed from a desire to allude as much as possible to the tribal history of the park.

“So we’re looking at those special gathering places as part of the elements,” she says. “There is also the notion that the big Pavilion is really the hearth or central meeting place of the community, and the idea that others could relate even in the way they’re lit to connect back to the main Pavilion.”

She adds, “If the Pavilion dome is lit in certain colors, the smaller pavilions also can be lit in the same colors, perhaps in silver and gold for First Night, and they all make connections back to the Pavilion.”