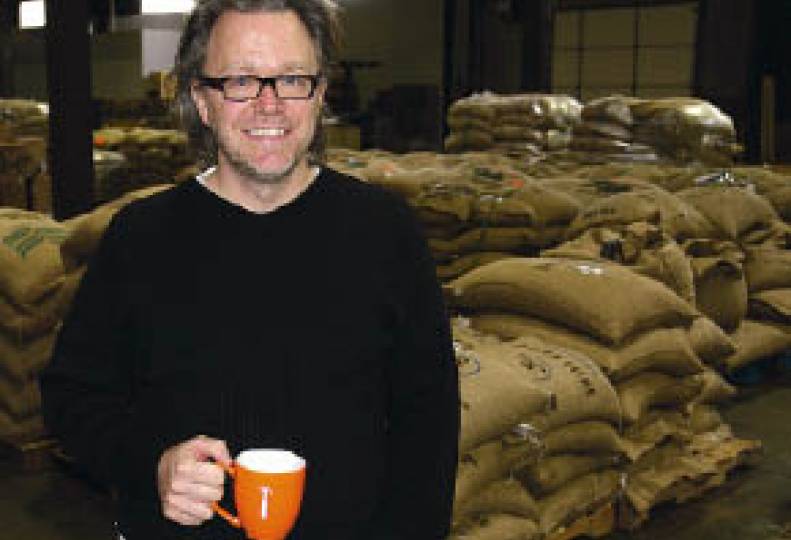 Thomas Hammer Coffee Roasting Co., a Spokane company with nine retail coffee houses and about 200 wholesale customers, says it plans to more than double the size of its retail chain, including entering markets as far away as San Francisco, while also venturing into new products on the wholesale side of the business.

The 17-year-old company, which plans to open a new store in Hayden, Idaho, this month, expects to open outlets in Pullman, Wash., and Moscow, Idaho, next year, and open stores in Portland, Ore., and San Francisco and Sacramento, Calif., within three years. By then, says Thomas Hammer, the company's president and CEO, the chain should have 20 to 25 retail outlets.

"We've always felt that we could run the type of quality stores we want with that number," Hammer says.

He adds, "Our plan has always been to have the capability to roast enough coffee and have a look and feel to that product that we could take down the West Coast. We're sticking to that plan."

The company's current nine stores are located in the Spokane, Coeur d'Alene-Post Falls, and Boise markets, and its wholesale customers—espresso cafes and drive-ups, grocery stores, and colleges—are mostly located in the Inland Northwest, but also in Nevada and Wyoming, says Hammer. Its annual revenues have exceeded $3.2 million in each of the last two years, he says.

It's latest two stores, the planned new outlet in Hayden and a Post Falls store it opened in 2007, are situated close to Starbucks Corp. outlets, a company that Hammer considers to be his biggest competitor.

"It's either going to go very well, or not. We have our game face on," says Hammer of the new Hayden store.

Hammer contends that with "skillful" local roasting, lower prices, and what he calls "handcrafted," rather than automated, brewing, the company can compete well with the giant Seattle-based chain.

Meanwhile, Thomas Hammer Coffee Roasting is looking to grow its wholesale division. It recently hired a sales manager who previously handled large national accounts for a coffee company in Portland, and it is looking to enter a new wholesale market after adding machinery that produces individually sealed serving-size packets of ground drip coffee.

That new product line will open up sales channels such as the hospitality industry, which could include major hotels, restaurants, and airlines, Hammer says. The new equipment has been installed at its Spokane headquarters, at 210 W. Pacific, and is being tested, Hammer says.

"We put a lot of money into the equipment, but it was necessary for us to get to the next level of production," he says.

Also at its headquarters here, the company plans to add a new training facility, which will be used partly as a "cupping lab" to teach wholesale customers the process of turning green coffee beans into cups of coffee, and partly to train baristas. Hammer even is considering opening the facility to train people outside the company who'd like to get into the coffee industry, and perhaps to other companies for meetings and receptions.

The headquarters space, which is in a large warehouse building, also houses the roasting operation, a bakery, storage, and corporate offices, including a board room that's labeled the "bored" room.

Hammer says the company's strategy for retail expansion is to provide the same level of professionalism, store design, hours of operation, and quality that a customer would expect from a Starbucks outlet, but strive for better interaction between customers and employees.

"Because we're local, I think there's a closer link between myself and our employees. There's a passion that exists, because we've created this from nothing. How this translates in the store is a different type of engagement with the customer at the counter," he says.

While retail sales grew about 4 percent last year, the company's wholesale division remained flat, Hammer says. Since it began offering wholesale roasted coffee beans, "another dozen microroasters have opened up" in Spokane, he says, though he doesn't see competition as bad. "Twelve more people out there keeps everybody sharp, keeps everyone on their game. There's room for all of us," Hammer says.

The company's coffee blends haven't changed much in recent years, although it has added more "fair trade" coffee, he says. "I'm very resistant to launching new blends. I think quality blends take a long time to perfect. That only comes with time in the industry."

The company also has honed its bakery products over the years. It now supplies its retail stores with 11 different baked goods that he says serve well as "grab and go" items that are easy to eat and complement its coffee.

Hammer says the poor economy offers "a unique environment to operate in today. A lot of business owners would step in and control employees more right now, because they're afraid they would blow the company up. I'm just the opposite. I try not to get in the way of my directors. They don't need me muddying the waters."

Instead, Hammer spends a lot of time answering e-mails from customers. He says he gets 50 to 60 e-mails a week from customers via the company's Web site, and he answers each one individually.

"It's taken on a life of its own. I have to keep doing it," he says. "People say they can't believe they got an e-mail back from the head of the company. When it gets to be 1,000 e-mails a day, that will be a problem, but that would be a good thing."

Hammer says the company has learned from its mistakes. It opened some drive-up outlets in Boise, but had to close them and decided that cafe-style outlets suit its customers better. Early plans to open up the front of its headquarters for a public meeting area had to be scrapped until now because of heating and cooling problems in the warehouse, Hammer says.

He says he doesn't believe economic conditions in the U.S. will change any time soon, but he intends to grow the company in spite of that.

"This economy is here to stay. We can sit around and complain about it, or we can do something," he says. "I find it very challenging. I like it. You have to be on your game. The people that understand that are going to do well."