Reorganization latest in series of actions to avoid default 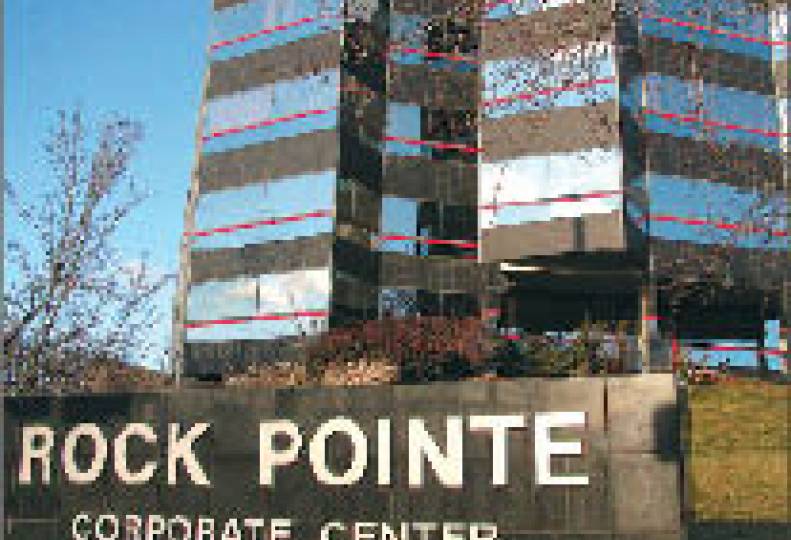 The company that owns the Rock Pointe Corporate Center has filed for bankruptcy protection, staving off a foreclosure sale of the big office complex north of downtown Spokane as debt woes continue to mount for the company's founders.

The Chapter 11 reorganization petition filed in U.S. Bankruptcy Court here lists assets and liabilities for Rock Pointe Holdings LLC, of Tacoma, each at more than $50 million.

Prium Cos., of Tacoma, is the majority owner of Rock Pointe Holdings. Prium's founders, Tom Price and Hyun Um, also are seeking Chapter 11 bankruptcy protection for a number of other limited liability corporations here and on the West Side, including Prium's subsidiaries that own the 17-story Wells Fargo Center, at 601 W. First downtown, and the two-story, 72,000-square-foot Trent Plaza, at 8517 E. Trent, in Spokane Valley.

Prior to Rock Pointe Holdings' bankruptcy filing last month, a trustee sale had been scheduled for Jan. 13 at the Spokane County Courthouse, says Michael A. Larson, an attorney with the Seattle law firm Pivotal Law Group PLLC.

DMARC 2006-CD2 Corporate Center LLC, of Olympia, had sought foreclosure, says Larson, who is the trustee on behalf of that company. DMARC is a subsidiary of Miami-based LNR Partners LLC, which specializes in acquiring and reselling distressed commercial properties.

DMARC claims that Rock Pointe Holdings is in default on $16.8 million owed in mortgage payments and fees.

A notice of trustee's also claims that Rock Pointe Holdings is encumbered with additional debt on the property in violation of its deed of trust. The claims include $39.3 million owed to Centrum Financial Services Inc., a Bellevue, Wash.-based mortgage company; $6.5 million owed to WF Capital Inc., of Seattle; $3.5 million to A.B.K. LLC, of Mercer Island, Wash.; and a number of smaller liens filed by several contractors.

Larson says he expects bankruptcy proceedings to take six months to a year.

"As long as they can show they are making progress, they'll proceed with the reorganization," he says.

If the property goes to sale, DMARC would be entitled to the default amount it had claimed, and other creditors would have to apply to the court for any proceeds in excess of that claim, Larson says.

The Rock Pointe Corporate Center rises atop a basalt outcropping at the northeast corner of Boone Avenue and Washington Street, a few blocks north of downtown. The 13-acre complex has 563,000 square feet of office space in four buildings and parking for 2,000 vehicles. Tenants there include Ecova Inc., Pitney Bowes Inc., and Casso Corp.

The structures there include:

•One Rock Pointe, a four-story office building at 1212 N. Washington.

•Rock Pointe III, a five-story office building at 1330 N. Washington that's by far the largest structure in the complex. It also is connected to two multistory parking garages.

Prominent Spokane developer Walt Worthy developed Rock Pointe Corporate Center in the late 1990s, and sold the complex to Prium in 2005. The Spokane County Assessor's Office recorded the sale price at $81.8 million, and the center's current taxable value is listed at $58 million.

Prium Spokane Buildings LLC, which owns the Wells Fargo Center, filed for bankruptcy protection in late 2010, claiming assets and liabilities each in the range of $50 million to $100 million.

Prium affiliate P&M Spokane Properties LLC, which owns the Trent Plaza filed for bankruptcy protection a year ago this week, claiming assets and liabilities each in the range of $1 million to $10 million.