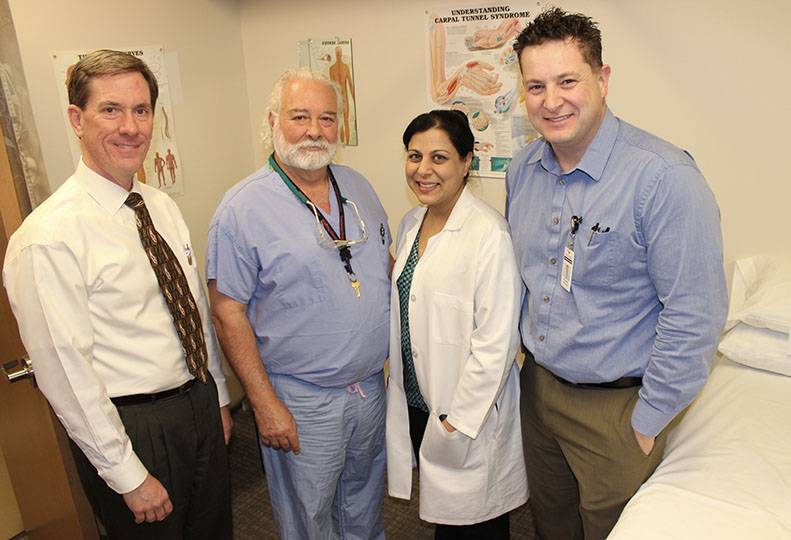 -—Treva Lind
Drs. Scott Carlson, John Demakas, Yashma Patel, and Wade Steeves are among the physicians who are part of the new Rockwood Neurosciences Institute.

A new multispecialty neurology care center in Spokane now joins 25 providers under one umbrella as the Rockwood Neurosciences Institute.

The institute, which launched near Deaconess Hospital a few months ago, is designed to provide for one-stop care with specialists from a variety of fields to diagnose and treat a range of neurological disorders, its doctors say. Some of those conditions include multiple sclerosis, amyotrophic lateral disease (ALS), epilepsy, nerve-spine injuries, migraines, and strokes.

Ween says the institute, located on the 10th floor at 910 W. Fifth, currently is expanding its specialists’ care to include certain sleep disorders, pain services and movement disorders such as Parkinson’s disease. The institute’s 10,400 square feet of space includes provider offices and about 20 exam rooms.

Dr. John Demakas, a neurosurgeon, says the move to grow services will add specialists for diagnosis and treatments in aneurysm care and for vascular malformations and diseases.

“We’ve hired two specialists to do minimally invasive procedures to diagnose and treat diseases of the brain, and we’re also getting a complex orthopedic spine specialist,” Demakas says.

A newly hired orthopedic and spine surgeon is expected in August, and the other two specialists will arrive in the next 18 months. The institute now employs 50 people, including 25 people in support positions for the 25 providers who are physicians, physician assistants, and nurse practitioners.

Work to form the institute started about three years ago as discussions about the concept grew among three senior Rockwood neuroscience providers: Ween, Demakas, and Dr. Scott Carlson, who specializes in neuromuscular and electrodiagnostic medicine. He works in cases involving ALS, carpal-tunnel syndrome, nerve injuries, and muscle disease, such as muscular dystrophy.

Rockwood previously had neurology specialists located in a few different Spokane offices, so the shift brings most of those specialties under one roof as a hub for integrated care, the institute’s providers say. The center also created a multidisciplinary practice for ALS patients to receive a range of services in one appointment, from seeing a specialist to undergoing speech and physical therapy.

“That brings together yet another integrated care model … it’s really the only center like this here,” Carlson says.

“What this means for the ALS patients in Spokane is, they can come in and see multiple disciplines rather than being shuffled about to different offices, and they can see a speech therapist, physical therapist, a nurse, Dr. Carlson as their neurologist, and other providers in a day,” Moore says. “In Spokane before, there was not this type of team approach.”

“Now there is an integrated full-scope of neurological services under one roof,” Carlson says. “Many general neurologists rely on us for specialty care.”

Demakas says, “Also, as an institute, we’re involved in education and research. We’re looking forward to partnering with the new medical school here in Spokane, perhaps being the neuroscience group to educate those individuals. We have almost all the disciplines covered now.”

“It really gives us a unique picture unless you go to Seattle to the west or Minnesota to the east,” adds Demakas, who performs spine and brain tumor surgeries.

“This model has improved communication,” Baldwin says, such as discussions with an epilepsy expert in the hallway rather than by email. “This is only seen in medical academic centers.”

Patel also says benefits include consulting with cross-discipline specialists such as Baldwin, or perhaps in radiology. She says such collaboration helps as MS treatments advance rapidly.

“We have advancements every year for a new medication,” she says. “We have 12 disease-modifying medications now, and five years ago, we had four. That’s going to continue to expand,” he says.

Dr. Wade Steeves is a general neurologist at the institute providing care for headache management, facial pain, nerve inflammation, and botox migraine therapy treatments. He says the institute brings a model of ongoing care for patients, many of whom face lifelong disorders.

“In other places, specialists might see a patient once, and sometimes it’s strictly just a consult; here we continue to follow a patient and have a sense of patient relationship,” Steeves says.

Another specialist, Dr. Salil Manek, says his care involves movement disorders, such as Parkinson’s disease and Huntington’s disease. For example, he handles post-operative evaluations and programming of a neurostimulator device implanted by surgeons as a treatment for some Parkinson’s patients.

The center’s specialists also tap into advanced diagnostic MRI and CT imaging provided from within the same building by Radia, an Everett, Wash.-based imaging business partnering with Deaconess and Rockwood. Radia’s Dr. Brian Tryon says the technology captures brain imaging down to less than a millimeter, as a diagnostic tool for conditions including stroke, epilepsy, and congenital malformations.

“Generally, what we do is advanced imaging of the brain, whether for brain tumors or a stroke, and it soon will include functional MRI, evaluating activity of the brain,” Tryon says. “For example, if you move your left hand, we can plot what area of the brain is responsible for that function.”

Dr. Michael Coats, a neurologist with a specialty in sleep disorders, recently joined the institute as director of its sleep lab. Coats will support the center’s sleep disorder work while continuing to see patients at Northwest Specialty Hospital, in Post Falls, and Aspen Sleep Center, in Spokane Valley.

Coats says various sleep disorders fall under the umbrella of sleep neurology, from sleep-walking to periodic limb movement, and some can result in a decline in neurological functions. Sleep apnea can increase the risk of several neurological disorders such as dementia and stroke, he says.