Remodel of Valley facility set to start this summer 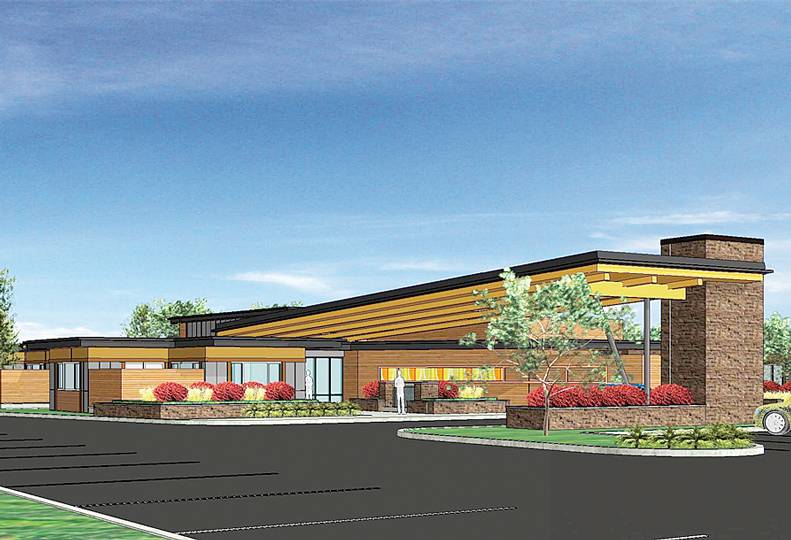 -LRS Architects Inc.
Rose Pointe Assisted Living, in Spokane Valley, will undergo a exterior update and a complete upgrade of all residents’ rooms.

Jessica Yaeger, executive director at Rose Pointe, says she agreed to take on her current position two years ago with the promise of a remodel to make the facility better for its residents.

“It’s really important to me to take care of these people here and get them an updated building,” Yaeger says.

The renovation of the 36,000-square-foot building will include polishing up the exterior, as well as completely upgrading all 59 of its resident rooms with new tile, flooring, counter tops, and cabinets for both kitchen and bathrooms.

The building, constructed in the 1970s, is owned by Brian McMahon, of Portland, Oregon-based RP Operations and managed by Lee Field, CEO and president of Tacoma-based Senior Services of America.

Yager says the remodeling process won’t be quick, as Rose Pointe doesn’t want to displace any of its residents while rooms are being worked on.

“We’re going to start with (remodeling) five rooms, and then as rooms open up, we’ll hopscotch throughout the building,” she says.

With a 40 person staff, Rose Pointe currently is seeking to fill the position of a full-time nurse.

Rose Pointe has the capacity for 76 residents, but currently houses 66. The age range for its residents is 55 to 100 years old. The length of occupancy averages two years for most residents, but Yaeger says some have stayed for as long as 10 years.

“We have to have two to a room just to make the bills work,” Yaeger says.

Most residents are assigned a same-gender roommate. Sometimes this can foster camaraderie and companionship, and other times it can add contention, Yaeger says.

“We work through the difficulties of what’s not working, but before we put people together, we very much try to see who each of them is individually,” she says.

Yaeger and her staff achieve this by striving to get to know the residents on a more personal level. If, for example, someone wants to stay up all night and watch TV, they can be placed with a roommate who’s also more nocturnal.

Yaeger says the daily cost of living at Rose Pointe that the state pays ranges from $59 to $119 per person based on the level of assistance they will require with daily living. The monthly costs for residents ranges from $3,000 to $4,500 per month including assisted-living services.

“(It’s) anything you’d need help with if you were in your home and couldn’t help yourself,” she says.

Yaeger says one of the reasons she chose to work for Rose Pointe is because it accepts Medicaid, which is a federally funded health care program administered through the state for low-income residents.

Anybody can find themselves on Medicaid if they had an illness that wiped out funds, lived longer than expected, or didn’t have money to care for themselves in their later years, Yaeger says.

“These people still deserve a home to live in that’s clean and nice, that they can feel safe in,” she says.

Yaeger says funding is the biggest challenge for Rose Pointe, and the facility isn’t alone in facing that challenge. According to Washington Health Care Association statistics published in 2018, 12 skilled-nursing facilities statewide had closed in 18 months due to lack of funding, and other centers might be in danger of closing.

“There are fewer buildings to take an increasing number of the geriatric population who don’t have the money to spend on their care,” Yaeger says. “So, there are less resources out there for people who have low income.”

Recently, Field of Senior Services of America and representatives from the Washington Health Care Association have been lobbying in Olympia for the state Legislature to provide more funding for assisted living facilities that accept Medicaid recipients

“We haven’t had an increase in our wages essentially for over a decade … it’s really difficult to improve and make money in these buildings that are Medicaid funded,” Yaeger says.

Yaeger says that Medicaid can cover a higher amount of people who have mental health disorders. Jim Burbo, the onsite social services director, helps residents at Rose Pointe with mental health challenges as well as practical challenges, such as filling out paperwork.

In addition to providing a meal plan for its residents, which includes breakfast, lunch, dinner, and snacks, Rose Pointe also has a social activities calendar. Activities include runs to Walmart, a dollar store, various banks, occasional casino visits, and walks at Mirabeau Point Park. Each month there is a birthday celebration with games, and a nondenominational church service is offered onsite every Sunday.

“We are friendly to all those things here … we very much believe that we’re not here to change people, we’re here to accept them as who they are,” she says.

Yaeger, who has a hospice background, says that if a patient is in hospice care and dying, they would be allowed to have a glass of wine or whatever they requested.

She says Rose Pointe is accommodating and flexible to those who have already spent years developing their personalities and affinities.

“We’re really here to try to love on the people as they are,” Yaeger says.