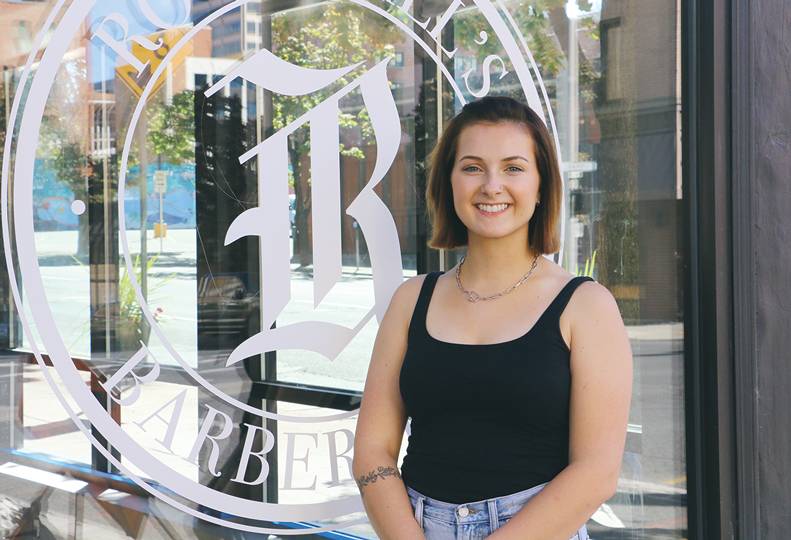 -Kevin Blocker
Madalyne Roundhill is set to open Roundhill Barbershop this week at the southeast corner of First Avenure and Stevens Street, in downtown Spokane.

A few years ago, at the ripe-old age of 21, Madalyne Roundhill realized she may be an old soul trapped in Generation Z body.

At least when it comes to the barbershop and salon experience.

“I want a classic feel, with the different wood already on the inside, with the old-fashioned leather, the kind of place the older generation would feel comfortable ... but is welcoming and open to everybody,” she says.

Roundhill Barbershop is set to open this week at 429 W. First, across the street from the Ridpath Club Apartments, at 515 W. First in downtown Spokane.

Located at the southeast corner of First Avenue and Stevens Street, Roundhill Barbershop occupies 800 square feet of space leased through SVN Cornerstone. Roundhill says not only is she pursuing a classic feel, but an intimate feel as well. The shop will have just three barber chairs.

At the outset, she will serve as the lone employee.

“As things will start to get back to normal, I expect to see a lot of foot traffic in this area,” she says.

Roundhill, originally from Issaquah, Washington, was trained as a barber through a company that was part of a chain. She worked for the company for only a month after she finished her training period.

“Almost right away, I could tell it wasn’t for me,” she says of the company, which she declines to identify.

She was later hired by a shop owner who runs Bass Barbershop, in North Bend, Washington. Roundhill’s Barbershop attempts to mimic Bass’s setting, she says.

“I think the classic barbershop has just as much to do with the feel, the connection between the barber and customer, as it does the haircut,” she says.

Roundhill was introduced to the Spokane area by her boyfriend, Chad Klingenberg, who graduated from Eastern Washington University with a degree in interdisciplinary studies last year.

As she investigated Spokane’s barber market, she realized she could start her own business sooner than later.

“The prices over here are so much lower than the West Side that I had to take advantage now,” she says.