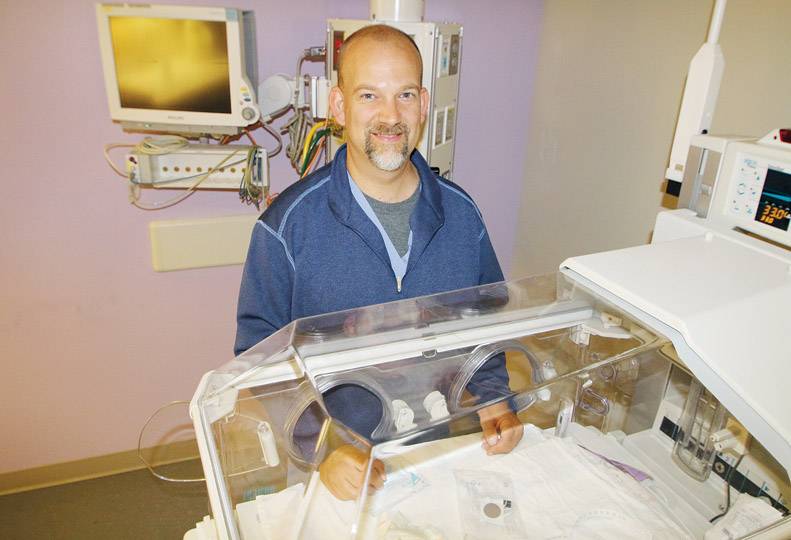 -—Kevin Blocker
Dr. Jason Wister, of Sacred Heart Children’s Hospital’s neonatal unit, says doctors don’t know what causes anencephaly, in which a baby is born without parts of the brain or skull.

Since 2010, the rates of anencephaly in Benton, Franklin and Yakima counties have been significantly higher than both the state and national average, says Dr. Jason Wister, who recently was named medical director for the neonatal intensive-care unit at Sacred Heart Medical Center & Children’s Hospital on Spokane’s lower South Hill.

Sacred Heart has the only children’s hospital in Eastern Washington equipped to meet a full range of children’s health needs, including birth defects, and treats most high-risk births east of the Cascade Mountains, including those from the three south central Washington counties, Wister says.

While anencephaly rates are low, it is a fatal birth defect in which a baby is born without parts of the brain and skull. There is no known cure or standard treatment for the defect. Most babies born with anencephaly will die shortly after birth, Wister says. Doctors don’t know the cause of the defect.

But Benton, Franklin and Yakima counties in the last six years have seen cases of anencephaly in eight of every 10,000 pregnancies. Spokane County’s anencephaly rate is just below the state average, at slightly less than two cases for every 10,000 births, Wister says.

Between January 2010 and January 2016, 42 babies were confirmed with anencephaly in the three south central Washington counties, says the Washington State Department of Health. The health department says it’s doing an extensive investigation to understand why rates in those counties are so much higher.

“The CDC and the Washington State Department of Health have looked for reasons why, and so far at this point they haven’t been able to identify any kind of risk factors—environmental or social—as to why the rates are high in those counties,” Wister says.

Gastroschisis occurs when an infant’s intestines have slid outside the baby’s body through an open hole near the belly button.

Wister—also a neonatal doctor—says the hole can be small or large. If larger, sometimes other organs, such as the stomach and liver, can also slide through the hole. Surgery is required shortly after birth to place the abdominal organs inside the baby’s body and close the hole.

The CDC estimates that almost 1,900 babies are born each year in the U.S. with the defect. CDC research says infants with gastroschisis are more likely to have white, teenage mothers who drink alcohol or smoke.

Birth defects are the leading cause of infant mortality across the country, accounting for 20 percent of all infant deaths. Of about 120,000 babies born in Washington each year, almost 7 percent die within their first year, says the state health department.

Wister has worked as a neonatologist at the children’s hospital for three years and was named the hospital’s medical director last August.

“Pretty much anything that requires a baby to have a higher level of care beyond the newborn nursery is considered high risk,” Wister says.

Sacred Heart says congenital heart defects occur in about one of every 100 infants.

The hospital places a neonatologist in the delivery room if a baby is delivered before the mother reaches 32 weeks of pregnancy, Wister says.

At the children’s hospital, Wister and other neonatologists hold a monthly meeting with obstetricians to discuss procedures for handling high-risk pregnancies and deliveries.

“We’re kind of the point people for making sure all the medical subspecialists, such as infant cardiologists, are plugged in and kept up to date about the status of the patients,” Wister says.

“We’re the doctors at the bedside—or talking to parents on the phone—on a daily basis giving updates and letting them know what the treatment plan is for the day,” he says.

In addition to providing medical care, Wister says the children’s hospital staff plays an active role in setting up patient transport to the facility from across a wide geographic region.

He says he’s enjoying his new job as children’s hospital medical director, and is still in early discussions with the NICU’s medical staff—and hospital administration—about how the hospital can possibly reduce the stay time of infants after treatment.

“This is part of a national discussion,” Wister says.