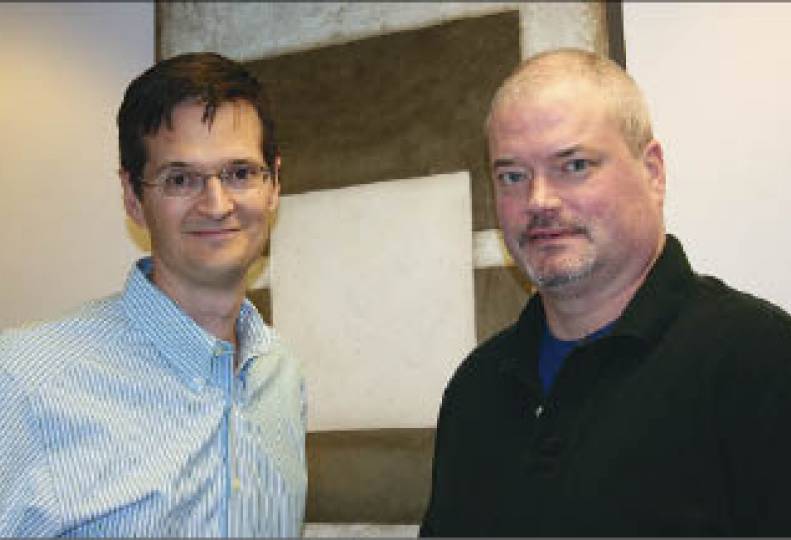 A Spokane-based patent law firm says it has tapped into what it calls a growing niche here, and has more than doubled in size since opening its doors a little more than three years ago.

Meanwhile, the firm, Sadler, Breen, Morasch & Colby PS, has been able to hire highly capable engineers as patent analysts, in part because of the poor economy, says Michael Colby, a partner in the firm, along with Lance Sadler, Jamie Breen, and Dave Morasch.

The firm has grown from five attorneys and one staff member in 2007 to nine attorneys, plus about eight support staff members and three analysts, who are engineers who help prepare patent applications and can do most of the same things that the attorneys do, the partners say.

Another attorney will join the firm soon, Sadler says.

The lawyers with the firm rarely go to court, but rather research, write, and file patents for their clients with the U.S. Patent and Trademark Office, based in Alexandria, Va., and with foreign patent offices. They follow up on the patent applications with patent reviewers and appeal the decision or amend the application, in a process called prosecution, when patent applications are denied or claims are changed by the reviewers in ways that would diminish the patents' usefulness to the firm's clients.

"We tell businesses what they need to know to make the business decisions," Colby says. "They might just need to cover one little piece of their invention," and spend less than they would on patenting the whole process, for example.

Colby says the lawyers at the firm mostly former engineers, because they must have a high level of technical knowledge to write a patent application for a new invention.

In addition to technical and legal experience, the work requires that one has an unusual mastery of the English language, to write patent claims that will close possible loopholes and protect an innovation well, Colby says.

"Some people have a basketball IQ," where they can see the big picture of how a basketball play will work, Sadler says. "We talk about having a 'patent IQ.' We have to live in a multi-dimensional space" to see all potential sides and possible loopholes that could leave an invention vulnerable to replication.

For example, Sadler says he once wrote a patent claim for a pattern of etching circuitry structure so a company could produce smaller computer hardware. An important piece of the claim was describing how the pattern, or geometry, of the laid-out components looked from above, so others couldn't easily replicate it without infringing on the patent.

Though individuals can and do file patents themselves, Sadler and Colby say their clients typically are companies that depend on well-written patent claims to protect the monetary value of their innovations.

"A lot of companies are valued based on how good their patents are," Colby says. "When big multinationals buy small or medium-sized companies, they aren't buying the building."

In general, when a company or an employee of a company comes up with an idea or new process that it believes could be profitable and decides it's worth the energy and the cost to patent, it would ask the firm to do a preliminary search to see if the patent would likely be new.

Sadler says that among the costs involved, including attorneys' fees and government fees, it's difficult to complete a patent for less than $10,000.

If the research indicates there would be a good shot at some benefit considering the time and expense involved in securing a patent, an attorney will write up a patent that describes the invention and include careful legal language to set out the patent's claims, or description.

Once the patent application is filed, it takes between a year and four years to get a yes or no response from the patent office, Sadler says.

Often, the response is not what the client wants, or the patent office reviewer has limits the claims allowed so that the item might not be as easy to protect.

In such cases, the attorney would file a response, or as in many cases at Sadler, Breen, Morasch & Colby, would call the reviewer to discuss the patent and try to negotiate for the best possible patent.

The prosecution of a patent application happens only if it is denied as written, Colby says.

"If the claims allowed are too narrow, it's difficult for the company to use," he says.

For example, if someone invented a spring-loaded mousetrap, it would be necessary to write a patent with claims that are not so specific that the patent only covers a wooden rectangular trap with a specific type of spring mechanism, because a competitor could easily work around such a limitation, making a very similar trap out of plastic, or with a leaf spring or spiral spring, for example, in order to bypass the patent, Colby says.

Sadler says the success of the relatively new firm is based in part on building relationships, both with its clients and with patent reviewers, so its lawyers can discuss cases with the reviewers and get the best possible patents approved for the firm's clients.

The firm seeks to interview the patent reviewer for every case that it can, rather than just filing a written response after a patent is reviewed, Sadler says. It becomes easier to talk to the reviewers, he says, because they come to know and trust the attorneys and to know that they are knowledgeable about the claims.

"They learn to respect you professionally if you have a history of providing a good analysis," Colby says.

Colby says that an important part of their business is that every attorney in the firm, from partners to junior associates, works billable hours, producing his or her own documents, but a partner reviews each patent claim or appeal before it's submitted to the patent office. They say this helps to ensure consistently high quality work for their clients, which in turn leads to a lot of word-of-mouth referrals.

Colby says that while the firm represents some Spokane-based companies, such as Spokane tech company Pacinian Corp., it isn't limited geographically in its client base. It represents some small clients, and also large companies such as Redmond, Wash.-based Microsoft Corp., and Olathe, Kan.-based Garmin International Inc., the maker of global positioning systems.

Colby says being based here gives Sadler, Breen, Morasch & Colby an additional advantage in attracting talent and clients by operating a law firm in a city where expenses are lower.

"We pass those savings on to our clients," Colby says.

In addition to his work at the firm, Sadler is an adjunct professor at Gonzaga University School of Law, and the firm often hires clerks or interns from the school who are interested in the intellectual property field.

"We're committed to growing the profession," and mentoring new lawyers, he says.