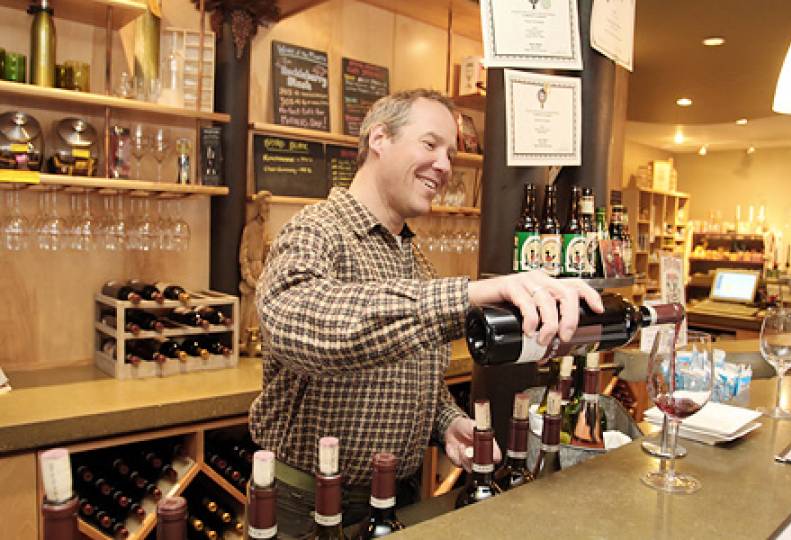 In his search for ideas to spark economic development in Sandpoint, Idaho, Mark Rivers, a Boise-based real estate and marketing consultant, says he discovered that local food and beverage purveyors, individually and sometimes in cooperation, had led him to one conclusion: Life tastes good in Sandpoint.

With that in mind, Forward Sandpoint, the economic vitality team Rivers consults, has launched the Savor Sandpoint initiative to promote the city's potential to become a regional draw for "foodies."

Rivers describes a foodie as someone with a dedicated, refined interest in foods and beverages, including how they're produced and prepared.

Sandpoint, a mountain resort city of 7,000 on the shore of the largest lake in Idaho, has a collection of entrepreneurs making award-winning artisan coffee, beer, and wine, Rivers says, adding that the Sandpoint area also is home to famous restaurants and innovative cafes. Additionally, the farmers market at Sandpoint draws shoppers from throughout the Inland Northwest and parts of Canada, and home-grown Litehouse Foods Inc., is known globally for its salad dressings.

"Looking in the Inland Northwest, beyond Walla Walla, no other community can lay claim to the diversity of products and experiences in Sandpoint for the foodie—certainly not any in Idaho," he asserts.

Collectively, the foodie industry already is a big segment of the Sandpoint economy, though it isn't often thought of that way, says Rivers, owner of Brix & Co., who the Sandpoint Urban Renewal Agency hired last year to recruit and retain businesses and services and redevelop downtown properties.

"Litehouse, on one end of the spectrum, is one of the largest employers in Sandpoint," Rivers says. "Dozens of other businesses ranging from restaurants to artisan food makers employ in the hundreds."

If the foodie industry bands together and integrates some of its efforts to attract foodies from throughout the Pacific Northwest, it could grow much larger, he says.

"I would like to see that within the next five years or so Savor Sandpoint will spawn another 10-plus quality businesses that employ another couple hundred employees," Rivers says.

Seeds of the initiative have already sprouted at a downtown cafe and neighboring winery and just need to be cultivated to promote growth, he says.

"We feature three different farmers at each dinner," Forsythe says. "They speak to the group a little about farming and about their farms. There's usually a theme having to do with sustainable farming practices."

Friday's dinner will feature pork from a heritage pasture breed of pigs produced by Selkirk Bison Co., north of Sandpoint. The other featured farms, which will provide the greens and other vegetables for the meal, are Solstice Farms of Bonners Ferry, Idaho, and Penrith Farms, of Newport, Wash.

Farm to Table meals also can be paired with wine, usually produced by Pacific Northwest vintners that also use sustainable and low-impact practices.

"Word has started getting out," Forsythe says. "The last one sold out and had quite a few people from Spokane."

She says she's seeing interest from potential members who live outside of Bonner County, and she's looking at the possibility of delivering orders to Coeur d'Alene.

Across the street, Pend d'Oreille Winery, at 220 Cedar, will host three summer events called Wheelbarrow Wednesday, in which up to 24 guests at each event will have the opportunity to meet regionally known chefs and shop with them at the farmers' market at Sandpoint, where they will select items to create a 100 percent locally grown menu.

While the guests are touring the other establishments, chefs will prepare five-course meals to be served at the winery, Meyer says.

"The great thing about Sandpoint is it has a lot of restaurants," he says.

People who come to Sandpoint for vacation share similar passions with the people who live there, says Meyer, who was inspired to make wine while visiting a vintner in the Burgundy region of France while on a ski vacation in the Alps.

"Sandpoint is a lifestyle place, with recreation and the lake," he says. "It also attracts people who care about how their food is prepared and how they eat it."

The farmers market at Sandpoint, which opened earlier this month and operates on Wednesdays and Saturdays through mid-October in the city's Farmin Park downtown, draws a lot of buyers from outside of Bonner County, says Brenda Woodward, president of the nonprofit market.

"In the summer months, we're probably around 50/50 between visitors and locals," she says. "We have a great visitor tourist population and people who have summer homes here."

"There's quite an assortment of farmers in our community," she says. "Our farmers' market has the obvious fruits and vegetables, and it also has unique foods like cheeses, lamb, and yak."

Rivers says the next goal of the Savor Sandpoint initiative is to provide foodies with educational opportunities.

"We're actively working toward creation of a culinary or cooking school in Sandpoint," he says.

The school would provide vocational and casual cooking classes and seminars to local residents and visitors, Rivers says.

The school could be independent or could be coordinated with higher education, he says. Separately, efforts are under way to establish a satellite operation in Sandpoint for North Idaho College.

In addition to strengthening the Savor Sandpoint brand, a cooking school would attract new visitors or keep them there longer, Rivers says.

Meyer says the Sandpoint Event Center, which is located in the historic Ninth Grade Center, at 102 S. Euclid, has a modern commercial kitchen and would be an ideal location for a culinary school.

Rivers says the Savor Sandpoint initiative is the first of a number of programs he is working on to enhance economic vitality in Sandpoint. Other programs include recruiting higher education facilities, advancing the art community, and expanding entrepreneurial endeavors.

"Everyone is a chapter in Sandpoint," Rivers says. "Each chapter has a wonderful story that I'm trying to elevate and convert into economic activity that creates new prosperity."