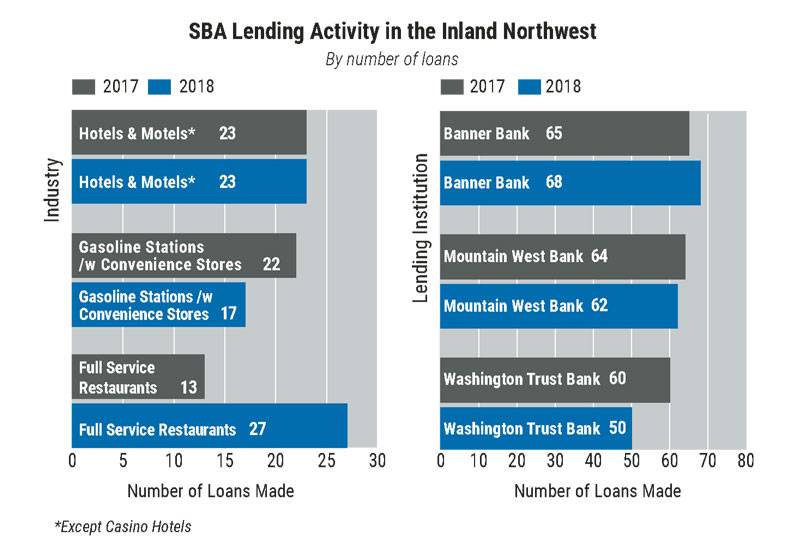 Loans backed through the Spokane branch of SBA’s Seattle district in fiscal year 2018, which ended Sept. 30, totaled $226.7 million, up from $218.4 million in fiscal year 2017, the recently released data show.

The organization will back “just about anything a business would need,” including land and facility costs, equipment purchases, and lines of credit, Hurd says.

Full-service restaurants led 10 industry categories in the number of loans with 27 SBA-backed loans totaling $9.6 million made throughout the Spokane branch in 2018, up from 13 loans totaling $4.1 million in 2017.

The large jump in loans made in that category could indicate that restaurants might be expanding, or they might be transitioning ownership, Hurd says.

The number of loans for gas stations with convenience stores also ranked highly for both fiscal years, with 17 loans valued at $17.8 million and 22 valued at $26.8 million issued, in 2018 and 2017, respectively, SBA data show.

Limited-service restaurants, which Hurd says includes fast food eateries and food trucks, ranked fourth for the most loans issued in 2018, at 12 loans made totaling $500,000, or an average of $41,700 per loan. That category ranked third in 2017, SBA data show.

Also notable, nine loans totaling $800,000 were made to the logging industry in 2018, according to the data, a category that didn’t register as a top industry in 2017.

Through 2018, Hurd says SBA worked on getting more capital in rural areas.

“We have another deliberate effort to push in that direction for 2019,” she says.

Hurd says economic development within the Spokane branch has been more spread out than just Spokane and Kootenai counties.

“The capital is getting in the hands of the entrepreneurs across the region, and I think that’s a good trend for broad-based growth, maybe in communities that haven’t had some in the past few years,” she says.

“What we’re hopeful for is that that will continue to grow,” she says.

“We believe that the president’s tax cuts and deregulatory agenda is going to help more small businesses grow and prosper in this coming year,” she asserts.

In both 2018 and 2017, Walla Walla, Wash.-based Banner Bank, Coeur d’Alene-based Mountain West Bank, and Spokane-based Washington Trust Bank made the largest number of SBA loans through the Spokane branch.

In Spokane County alone, Mountain West Bank made the highest number of loans in 2018, at 25 for a total volume of $5.1 million, according to SBA’s data.