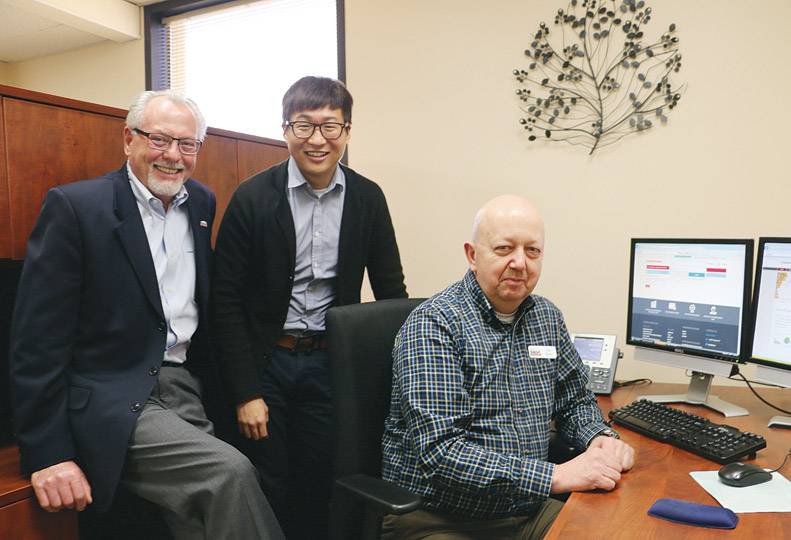 According to a press release issued by WSU last September, the internship program has worked with 590 clients and provided over 200 research reports.

“The lead intern’s responsibilities are pretty much the same as mine,” he says. “We all stay in real close contact all the time.”

Interns typically work about 10 hours per week during the school year, and more in the summer, depending on their schedule, Taylor says. The Washington SBDC asks the interns to commit to interning there at least a year, he says.

Businesses from around the state can request the research team’s services, Taylor says, in both international and domestic market research.

“Our job is not to tell them where to go, but to give them the information they need to make a decision,” Taylor says. “So we give them the good, the bad, and sometimes the ugly.”

For example, Spokane Valley-based Zaycon Foods Inc. has previously used the intern research team to compile information about possibly exporting meats to certain markets in China, such as what regulations are placed on imported food there and what the purchasing trends are for meat products.

Taylor says the interns typically have between six and eight clients at a time. Clients don’t contact the team directly, he says. They’re referred there by independent business advisers or by Washington SBDC’s own international trade specialists.

“They do a lot of the preliminary work with the client to come up with their (specific) questions,” he says. Taylor says the team’s main goal is to not only answer a client’s questions, but to show the client how they found the information so the client can continue the research on their own.

Former intern Doohong Park, who majored in international business management at WSU and now works in the exporting department at Zaycon Foods, says the intern’s job begins when Taylor gives them a request for research.

“Basically, a company comes to us with a request for market research,” he says.

Companies might be looking to export a product to a specific country and may want to know more about the demographics of that country, what similar products sell for there, and so on, Park says. Companies also may want to know about any free trade agreements, taxes, and restrictions on imported goods in certain countries, he says.

“We try to find out everything we can about those questions,” he says.

Levi Huddleston, a junior mathematical economics major at Whitworth University and a current intern in the program, says companies also often want research on the consumer base for certain exports, as well as consumer trends.

Zhen Cai, an accounting master’s student at WSU and the program’s lead intern, says the interns do proactive research in addition to responding to requests from companies.

“We check different country’s purchase guidelines, and see which countries are most likely to purchase from the U.S.,” he says.

Katie Heitkemper, a sophomore business major at the University of Portland and one of the interns in the program, says the program enables interns to take on responsibilities and grow.

“They give us responsibilities and help us improve on our research,” she says.

“Part of that proposal was putting a research program in place,” Chambers says. “In order for businesses to export overseas, they need market intelligence.”

The program is funded now through the SBDC’s own funds, Chambers says, as the grant expired almost two years ago. Chambers says the program has a budget of about $100,000 to $110,000 a year.

“That’s one challenging aspect, keeping it funded so we can actually pay our interns,” he says.

“Basically, any university around the state that wants to play, we try to work with them,” he says. “The program itself is pretty virtual; Gonzaga is the only school that has interns that work here (in the building).”

The program originally started with three or four interns in 2010, Chambers says, and grew to six interns within a year.

“Part of it was just us learning what we didn’t know, and what we needed to find out,” he says.

In the beginning, the internship program had a very intensive and long training process, Chambers says, which proved to be a bit difficult.

“We found most of the students we were getting were second year (Master of Business Administration stu-dents) or graduating seniors, and by the time we got them trained, they were going out into the real world,” Chambers says. “So we developed a training process that uses less time.”

The program was selected as a finalist last year by the University Economic Development Association in the category of talent development for its training program, Chambers says.

These days, the program averages 10 to 12 interns during the school year, and three to five in the summer, Chambers says. The summer interns usually work more hours than school year students, he says.

Chambers says SBDC operations in other states have taken notice of the program here, and have started their own programs based on its model.

Matt Kunz, vice president of foreign market development for Zaycon Foods, says that company has been utilizing the research intern program for about a year and a half.

“We had just barely started exploring exporting food … it’s been a tremendous resource,” he says.

Kunz says that doing overseas market research can be incredibly time-consuming for businesses.

“As a company, we’re really kind of blind not only to the opportunities that may be out there in the overseas markets, but it’s so incredibly vast,” he says.

Using the interns’ research, Zaycon is better able to decide which markets to approach, Kunz says.

“With the research team being able to get the particulars, and then they can come back with actual data that either supports our hunch, or gives us pause,” he says.

As an example, Kunz says the interns were able to help Zaycon start its forays into the Chinese markets.

“The market size is unbelievable,” he says. “We had no idea just how big that market is for food products.”

Kunz says the company used the research team to figure out several factors about exporting meats to China.

“By utilizing the research team, we were able to discover not only what the regulations are, so we’re not marketing something we can’t sell there,” he says.

Park, who now works for Kunz at Zaycon, says that the program takes the concepts learned in the classroom and applies them to real life.

“In school, we just learn about the words,” he says. “This is hands-on stuff.”

Park also says the internship helped prepare him for his current position at Zaycon. On his first day, he was asked to do some market research on an industry trade show overseas, he says.

“At that point, I didn’t panic, because I knew where to start and exactly what to do,” he says.