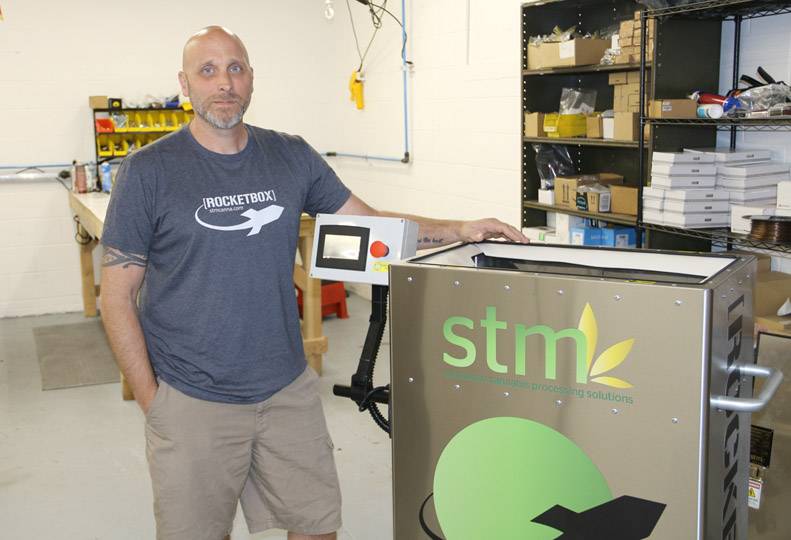 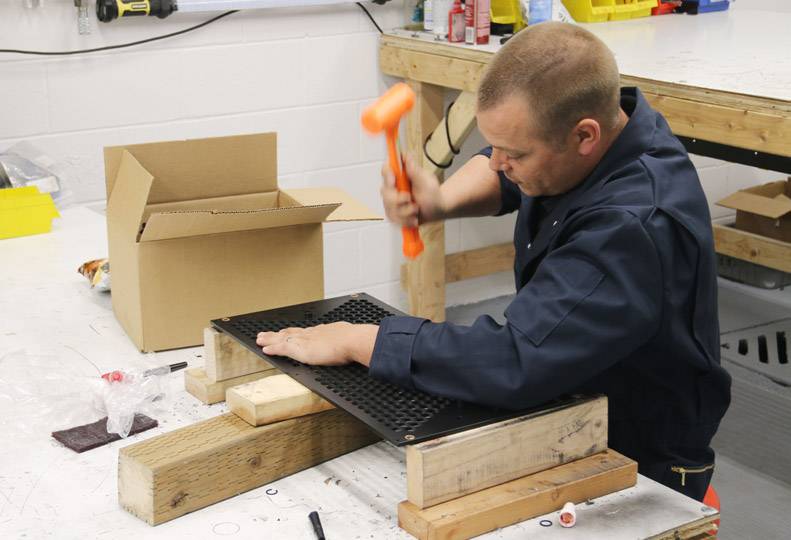 As the cannabis industry continues its rapid expansion, manufacturing companies across the country are clamoring to develop new technologies to meet the needs of growers, producers and consumers.

One such company is Sesh Technologies & Manufacturing LLC, a developer and manufacturer of commercial cannabis processing equipment headquartered here in Spokane, at 3223 N. Market.

STM’s Spokane-based senior vice president of sales Jessica Ferranti says the company has been growing rapidly and plans to expand its customer base, as well as hire two to three new employees in the coming months.

“We’re still a very new company, but our goal is to be known as an innovative manufacturer offering the latest commercial capabilities customers in this industry are seeking,” she says. “We want to build machines that not only create a product that’s as healthy as possible for the end user, but that are also ahead of the curve in terms of safety and meeting legal standards for quality processing.”

The company got its start when Dueweke, who is an engineer, was asked to create a machine capable of extracting rosin—a sappy oil secreted by the cannabis flower—cleanly and effectively.

“After developing the rosin press, Jason and our other co-founders then researched and discovered additional needs for machinery to serve the cannabis industry and together they formed STM,” she says.

Ferranti says STM currently employs 10 people, most of whom work at its Spokane headquarters, with remaining staff working in marketing and sales at the company’s satellite office in Denver.

“We’re actually growing quite a bit faster than we’d initially predicted and will probably need to research expanding or relocating to a larger manufacturing facility soon.”

STM’s Spokane headquarters are located in a 10,000-square-foot building, with most space being dedicated to design, assembly and manufacturing of the company’s two main products, the rosin press and a joint-rolling machine called Rocketbox.

Ferranti says STM’s press can extract rosin from cannabis flowers, as well as kief or hash, which is the soft, visible crystal pollen that covers a cannabis plant’s flowers and leaves.

“Rosin is pretty versatile substance,” she says. “Our press uses heat and pressure to extract it, and from there, it can be used to make dab material, a concentrate in vape cartridges, or be worked into topical creams and edibles.”

She says STM’s rosin press is fully automatic and capable of processing either 50 pounds of cannabis flower or 95 pounds of kief or hash in an eight-hour day.

“There are other processes that use solvents to extract oil, but our machine is unique because it uses a clean technology that leaves no foreign substances, and it can create commercial scale volumes of product,” she says.

The company’s other main product, called the Rocketbox, also is one of the most efficient machines of its kind on the market right now.

“The Rocketbox takes leftover cannabis flower and packs it into paper joints,” she says. “It’s able to create 453 pre-rolls per two-minute cycle, which is amazingly efficient.”

Although she declines to disclose STM’s revenues, Ferranti says the company currently completes between 25 and 50 machine orders every month.

The company’s products can be leased or purchased directly. The rosin press retails for about $20,000, while the Rocketbox pre-roller is listed at $12,500, Ferranti says.

“Going forward, we’re working to maintain or exceed that level of production,” she says. “We’d like to expand our client base and possibly add more offices in key locations like New York and Los Angeles.”

Ferranti says the company’s customers include farms and producers, processors, wholesalers, and distributors, across the U.S. and Canada, but she says its customer base varies according to the cannabis laws in each state.

“The laws and regulations dictate who we’re able to market to and work with, as certain states don’t allow for extracts,” she says.

Although the company’s products potentially could be applied to related industries such as farming or botanicals, Ferranti says STM currently is focused solely on the cannabis industry, which includes both marijuana and hemp.

“Hemp is a cannabis species that doesn’t include the psychoactive components found in marijuana,” she says. “We do work with customers who are using our machines to extract oils from hemp plants, and those oils are often used in creation of medicinal products.”

STM has customers in most states that have legalized marijuana or hemp production, Ferranti says.

“We also have a rather large customer base in Canada and are working to expand to include more international clients,” she says.

Ferranti says STM markets its products online via its website, and through various cannabis trade shows and conventions.

“A lot of people hear about us via word-of-mouth, or through our trade show demonstrations,” she says. “We also offer one-on-one webinars broadcast from our Spokane headquarters. Customers can call to arrange for an in-person or webinar demonstration, whichever they’d prefer.”

“We often hear from our clients that our machines are quite advanced for their time,” she says. “But we’re always aware that regulations concerning the production of extracts are tightening. We’re currently ahead of the game in terms of safety and regulations standards, but we want to stay ahead so that when those new standards are developed, our clients don’t have to buy a new machine to stay compliant.”

Ferranti says in holding itself to such high safety and production standards, STM is planning for the future of the cannabis industry.

“We believe that once cannabis is legalized at the federal level, it will have similar regulations to that of alcohol or other food-processing products,” she says. “At that point, there will be a huge demand for clean production methods and technology, and our standards will put us at a level above our competition.”

According to Ferranti, STM has two main competitors in the cannabis processing equipment market; Denver-based PurePressure LLC, which manufactures a table top rosin press, and an Amsterdam-based company called Futurola that makes a joint-rolling machine.

“Most standard rosin presses are table-top style and only capable of creating smaller product volumes,” she claims. “The difference is that we’re using a completely different technology you won’t find anywhere else, and in terms of actual machines, ours is the only fully enclosed, fully automatic, commercial press available today.”

She says that while STM’s machines may seem more expensive, they make up for that cost with the amount of product they’re able to produce.

Ferranti says when the company first started, it initially offered a mobile processing service to cannabis farms as a way of demonstrating the capabilities of its machines.

“At first, we thought there would be a larger demand for mobile services, but we discovered that once they’ve seen how our products work, most people prefer to purchase the equipment up front,” she says. “A lot of farms struggle with financing, so we also offer lease-to-purchase options to help keep costs low.”

Ferranti says cannabis flower remains from the rosin press can be used in the pre-roll machine, creating a zero-waste process, which is another attractive option for producers.

“Last year, STM started what we call the Clean-Green Cannabis Initiative, which encourages customers to use both the rosin press and the Rocketbox in what we call a zero-waste workflow,” she says. “Using the two machines together enables them not only to offer solvent- and chemical-free products, but also reduce waste, decrease labor processes, and maximize their profitability.”

“It’s our goal to be able to unveil one new machine per year, but we want it to be machinery that is truly needed within the industry,” she says.

“While customers do care about quality and volume, the thing we hear about most often is the need to decrease labor. So, the designs we’re exploring now are for machines that will allow a customer to decrease labor, while still creating the same high-quality product, at an efficient rate.”