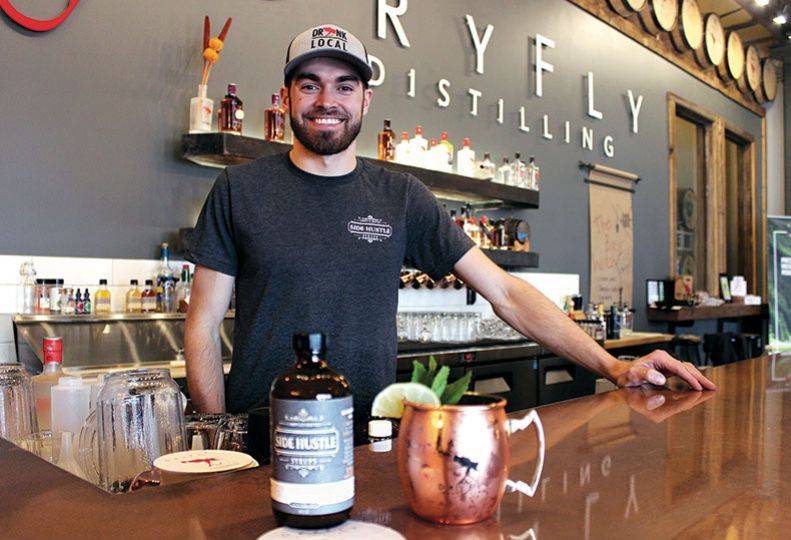 -—Treva Lind
Dillon Hueser, founder of Side Hustle Syrups, has developed a strong alliance with his employer, Dry Fly Distillery.

Despite the name, ginger beer typically is a nonalcoholic beverage that’s produced by the natural fermentation of ginger, yeast, and sugar for a sweetened, carbonated beverage. It’s often used to zest up cocktails, such as the Moscow Mule.

After months of testing blends with raw ginger and fruit juices, Hueser found what worked best wasn’t a traditional bottled product but rather a natural ginger syrup that is mixed with one part syrup to four parts sparkling seltzer water.

He says Side Hustle Syrups have quality ingredients that go beyond a traditional simple syrup typically made with one part sugar to one part water, and then infused with flavor.

“With the craft aspect, you’re going to notice a lot of different flavors across all my products,” says Hueser, 26. “They differ in flavor because of the sourcing of ingredients. It is a craft-based thing where I’m using raw-based ingredients and no extracts, no flavorings.”

As sole owner and employee, Hueser officially launched Side Hustle Syrups during the summer. That’s when he completed state food-safety requirements to sell the products, which are approved to be distributed in refrigerated bottles. He plans in the near future to go through other certification measures to demonstrate that the syrups are shelf-stable products.

The startup handles a small percentage of sales to retail customers but mainly does business on a wholesale basis, including selling syrups to Dry Fly for use in specialty cocktails served in its tasting room at 1003 E. Trent. That location also is where Side Hustle Syrups are available to retail customers.

The company’s other wholesale clients currently include Bangkok Thai and the Viking Bar & Grill.

“A lot of my focus is meeting my customers face to face,” he says. “Right now, I’m 95 percent focused on wholesale.”

Hueser, however, does plan to expand retail sales.

“I foresee doing quite a bit of farmers markets next summer. This past summer, Dry Fly had a vendor space (at the South Perry Farmers Market), and my products were there. I went to those and talked about my products.”

All the syrups can be used among ingredients for cocktails or for nonalcoholic drinks. Dry Fly stocks eight-ounce and 16-ounces bottles of Side Hustle syrups for customers, with retail prices ranging from $15 to $30 depending on size, style, and complexity of ingredients.

Lemon-lavender and elderflower syrups are popular, he adds, and some of the products can be used in baking or as a dessert topping, such as on ice cream. Hueser puts the chai tea syrup in his own coffee or espresso, for a drink often called a dirty chai.

For customers making cocktails or other beverages, he recommends using one part syrup to four parts soda or water, and as an example, one ounce of syrup to four ounces of soda water.

About six years ago, Hueser began a steady hobby as a homebrewer of craft beers, before he worked professionally as a brewer.

“I’ve always been infatuated in the development and craft of either cooking products or beverages,” he says. “That has a significant role in why I do what I do. It’s just the craft of it all, and so the experience from being a homebrewer helped immensely.”

“Whenever I brought in products to Dry Fly, I’d say, ‘What do you think? How does this pair? What does it need more of?’” he says. “The first ginger beer was too lemon-limey. I had to scale that back and add some spices.”

“That word 'craft' is super important with my business,” he adds.

Hueser also admits some bias. He previously worked full time at a craft beer brewery when he accepted Dry Fly’s request to make ginger beer in his spare time at home. This fall, he changed jobs and is now a part-time distiller for Dry Fly, while he spends other days developing Side Hustle’s business. That original concept stuck, however, of working on the side to create new products.

“The name came from the actual meaning of side hustle, so it’s just something to do that honored my talents on the side to make a little money,” he says. “It still is my side hustle.”

Hueser says that the ginger beer syrup has landed the right blend of ingredients and remains the flagship product. He uses fresh juices from ginger, limes and lemons along with blends of sugars in a recipe he calls more complex than simple.

“We set out to develop a ginger beer that was more than sugar, water and ginger flavoring,” he says. “Using that raw component of ginger brought a lot of flavor and life to the product. We wanted something totally different.”

He adds, “When I started, it was much like brewing, and I’d bring it in a five-gallon keg of ginger beer, then over time it turned into a syrup. It was very tedious with minor adjustments here and there, and as a brewer, that’s just in my nature.”

Pending the achievement of shelf-stable certification, the business might eventually stock products in local grocery stores, he says. “That’s on the horizon; there are lots of components that come with that. Being a small startup, I have to do little bits at a time. I don’t want my product diminished by growth.”

Hueser expects to keep developing new syrup variations, including around seasonal trends or specialty cocktails. He recently developed a spiced cranberry syrup for the Pumpkin Ball charity fundraiser that was held at the Davenport Grand Hotel.

The hotel purchased that blend for the event, and Side Hustle as a business donated some products along with Dry Fly for small packages sold to raise money for the event.

“We did one exclusive cocktail at the event,” he says. “It featured spiced cranberry syrup that was served. It had a very mulled wine flavor.”

As another example, Dry Fly developed a specialty cocktail called “Fall For You,” using the elderflower syrup and apple juice. Developing creative drinks is part of a growing craft cocktail scene, Hueser says.

In fact, many of Spokane’s food and drink enthusiasts have a “drink local” and craftsmanship mindset, he adds.

“When you talk about the backbone of craft products, it has to be done in manner that there is little margin for error,” Hueser says. “You have to have consistency and use better ingredients to have a better product.”