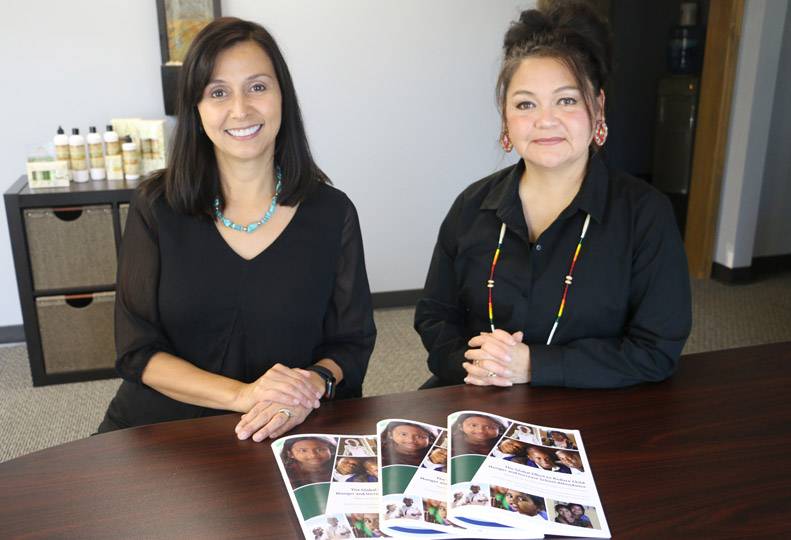 In the past year, Spokane-based Sister Sky Enterprises has moved into about 3,000 square feet of space at 55 E. Lincoln Road and has grown to 12 employees from three. Nine employees are Native Americans, says Simeon.

Like many entrepreneurial ventures, it’s been a bumpy ride.

“We’ve been flat broke twice and literally burned to the ground once,” says Simeon, laughing, “and we’re still here.”

Simeon says all facets of Sister Sky Enterprises share a common thread—each program, each initiative, and each bottle of lotion the company sells goes back to health, wellness, and education.

In 1999, Simeon and TurningRobe started the beauty products side of the business, says Simeon. It sells lotion, shampoo, conditioner, bodywash, and soap and partners with Native-owned hotels and resorts to place hotel-sized products in guest rooms, she says.

The company’s best-selling product, Kevin’s Care, started when Simeon’s son, who now works for Sister Sky, was born with severe eczema, she says. Lotions would sting him, so Simeon began looking at natural ingredients and different herbs and plants used by Native Americans to develop a product her son could use.

“We were very careful to say, first of all, it’s natural, and we’re going to get rid of the synthetics and include herbs. Then, we’re going to … make a line that’s great and wonderful but also honors that herbal wisdom of the past,” says Simeon.

For example, the company contracts with the U.S. Department of Health and Human Services’ Administration for Native Americans on a program that promotes language preservation and revitalization for five tribal recipients across the country. Sister Sky Inc. provides training and technical assistance for tribal governments within that program, says TurningRobe.

Given all the complications involved with contracting, TurningRobe says she and Simeon decided to work in areas they felt most passionately about.

With past cultural traumas, TurningRobe says she believes Indian Country needs healing, and there are many channels, such as language revitalization and economic development, that she feels help to foster that healing.

“We just want to be a teeny part to help some of those things go into Indian Country to heal,” she says.

The sisters grew up on the Spokane Indian Reservation, says TurningRobe. On their father’s side, they’re from the Spokane Tribe of Indians, and they’re Pauquachin First Nation, of Vancouver Island, on their mother’s side.