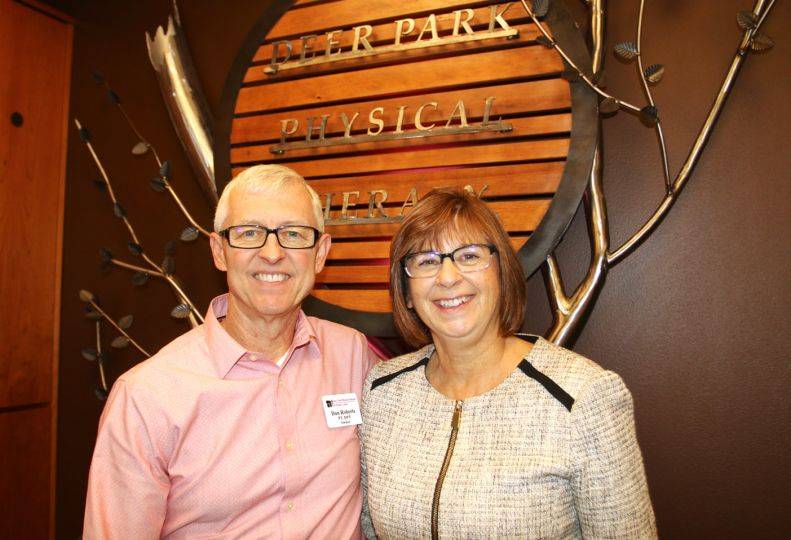 -—Samantha Peone
Dan and Bev Roberts opened a physical therapy in Deer Park in 1983 and since have expanded it several times. Next, they hope to open an athletic performance center.

The Deer Park Physical Therapy & Fitness Center says it has doubled its fitness center membership to 650 people since adding a 1,500-square-foot pool in June.

The therapy and fitness center was established in 1983 to provide physical therapy. It now offers the fitness and aquatic center, says Dan Roberts, owner and physical therapist.

Roberts says he wanted unity between the physical therapy clinic, fitness center, and now the pool.

“My vision was to have a facility where we could be more balanced, offer more wellness programs, and be a resource to our community for more than just physical therapy options,” Roberts says.

The physical therapy side of the business includes treating people who have been injured at work or have been in car accidents, as well as those with women’s health problems, lymphedema, and other concerns. It also provides vestibular, cardiopulmonary, and postsurgical rehabilitation. Services like golf swing and running analysis are also available, in addition to other programs. The clinic is also listed as an offsite treatment facility for the U.S. Department of Veteran’s Affairs, he says.

The aquatic center offers swim lessons and aquatic physical therapy. Classes include senior fitness, weight loss, arthritis, and general water aerobics sessions. Both of those centers are open to the public, he says.

The business employs 30 employees, most of whom are full time. That count includes physical therapists, physical therapy assistants, personal trainers, fitness and aquatic directors, swim instructors, and lifeguards, and administrative assistants, he says.

Roberts says he expects the company’s annual revenue to increase 40 percent this year, compared with 2016, but he declines to disclose revenue figures.

As for the new pool, it’s created a new clientele of patients that weren’t served before, he says.

The pool and fitness center have impacted the business’s overall fiscal health.

Looking forward, Roberts says he wants to open an athletic performance center, but the project is still in the conceptual stages.

The Robertses’ business spent its first seven years located in Deer Park Hospital. The clinic moved in 1990, before relocating to its current spot.

When the couple purchased the current facility, it had 3,500 square feet of space. In 2012, the couple added 1,500 square feet to expand the fitness area and build the fitness studio. The following year, the business added more office space and a massage suite for Revive Therapeutic Massage, operated by Dan and wife Bev Roberts’ daughter, Danna Roberts-Leach, he says.

Andrew Roberts,  their son, is also a physical therapist with the business, says Bev, who is also administrative assistant and public relations manager for Deer Park Physical Therapy & Fitness Center.

With the recent completion of the pool and locker rooms, the business now occupies 8,500 square feet, says Dan.

The therapy and fitness center is open Monday through Friday from 8 a.m. to 5 p.m., but that can stretch to 7 p.m. to cater to the working population. The pool stays open until 7:30 p.m., and the fitness center is staffed until 7 p.m. but open to members around the clock, he says.

Bev says the therapy and fitness center has been a resource for athletic departments at schools.

Sean Bernier, fitness director with the facility, says the business goes to schools in the surrounding areas and trains coaches in injury assessment. Coaches are trained to assess injuries on athletes, provide them with take-home exercises, and refer them to physicians if the injury is severe enough.

Of the arrangement, Bev says, “We work as a team instead of us going in and taking charge over them.”