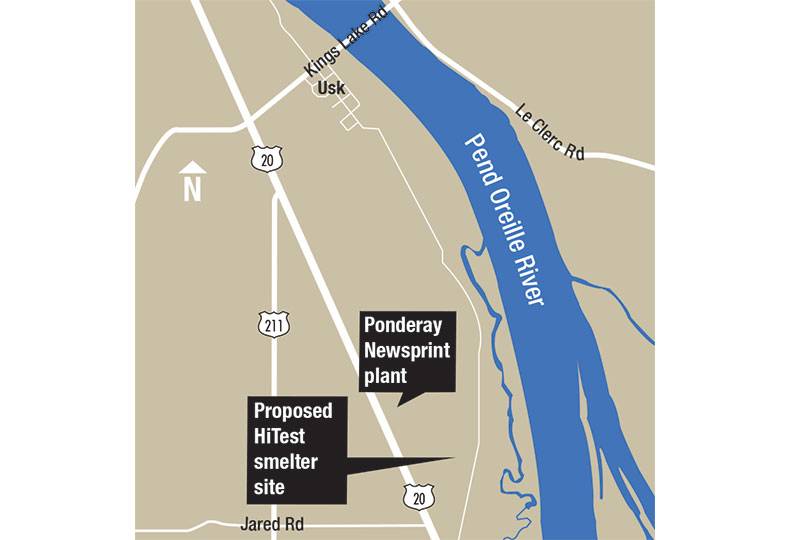 The manager of the electric utility that would supply the recently announced silicon smelter planned in Usk, Wash., 50 miles north of Spokane, is anxious to know more about the potential big-power customer, Edmonton, Alberta-based HiTest Sand Inc.

Colin Willenbrock, general manager of the Newport-based Pend Oreille Public Utility District, says a lot of contingencies have to be worked out before the district can energize a new industrial customer of HiTest Sand’s projected magnitude.

One complicating factor is the proposal for HiTest to develop the smelter on Ponderay Newsprint Co. property.

Ponderay Newsprint, located at 422767 state Route 20, owns 900 acres of land along the Pend Oreille River, in Usk. The HiTest smelter would be on the southern third of the property.

“At this point, the PUD has received a request for power to be delivered at that site,” Willenbrock says.

The PUD doesn’t have authority to act on the request, he says.

“We require proof of ownership or authorization from the owner,” Willenbrock says.

The Washington state Department of Commerce recently announced the state is investing $300,000 in economic development assistance to HiTest Sand to develop a new $300 million silicon smelter in Usk, designating the facility as a project of statewide significance.

It will have a net environmental benefit, though, because the silicon would be used by in-state solar cell manufacturers to produce products to reduce carbon-based energy consumption, the Commerce announcement said.

The project will take nine months to design and two years to build, Commerce said.

“Paying an average salary well above the community’s prevailing wage, these high-skill jobs will deliver a significant boost to the tri-county region in the northeast corner of the state that’s been struggling with unemployment rates well above the state’s 5.8 percent average,” the Commerce release said.

Doug Tweedy, Spokane-based regional labor economist with the Washington state Employment Security Department, says that Pend Oreille County’s July unemployment rate was one of the highest in the state, at 9.2 percent.

HiTest Sand executives didn’t immediately respond to requests for interviews from the Journal.

HiTest Sand was founded in 2012. The Golden Star newspaper, of Golden, British Columbia, reported last year that HiTest originally was formed to supply sands for use in the oil-production industry’s extraction process, called fracking.

When HiTest discovered a high-quality silica source near the town of Golden in 2013, the company changed its business model with a goal to be a supplier to the “carbon positive” solar panel industry, the newspaper reported.

High-quality silica is the source material for smelting silicon.

Golden was one of the sites HiTest had considered to erect the smelter before deciding on the Usk site.

The town of Golden and the silica mine are about 300 miles north of Usk.

No background information on HiTest Sand is posted on the company’s website.

Willenbrock questions whether the state has conducted the normal due diligence prior to making the announcement about the facility.

“Even our friends at the state don’t know a lot about them,” Willenbrock says. “Perhaps they are relying on the claw-back provision.”

If HiTest doesn’t build the smelter or meet performance requirements, the provision enables the state to recover its investment.

To meet the threshold as a project of statewide significance, the project must be a private industrial development with private capital investment in manufacturing or research and development that will provide a net environmental benefit, the Commerce announcement said.

A Spokane-based business development manager with Commerce declines to comment on the smelter plans, referring inquiries to the department’s Seattle office. Calls there weren’t returned immediately.

“We’ve only met with HiTest once or twice and just recently got the request for service,” he says. “We don’t know a lot about them. As a big part of the contract, we need to know who our counterparty is and the party’s creditworthiness.”

HiTest Sand’s request is for a 90-megawatt base load, which is similar to the load Ponderay Newsprint Co. consumes. The load is based on how much the plant would consume consistently at any given hour.

“Our policies require any industrial load of this magnitude to be by a negotiated agreement,” Willenbrock says. “We’ve got fixed costs and need revenue to cover those costs.”

He says the PUD might be up for some tough negotiations.

“HiTest is looking for a cheap deal, far below our costs,” he says.

That violates a contract that was to run through 2027, he asserts.

“Our legal position is the long-term contract is officially terminated, and they owe us damages for that,” Willenbrock says.

Ponderay Newsprint uses about 70 percent of the PUD’s electric load, he says.

The PUD continues to serve Ponderay Newsprint, and the plant continues to operate at or above its historic capacity, Willenbrock says.

The PUD owns and operates Box Canyon Dam, on the Pend Oreille River near Ione, and owns Boundary Dam, near Metaline Falls.

Willenbrock says HiTest potentially could offset the loss of Ponderay Newsprint as a customer, although it’s not as simple as unplugging one customer and plugging another in.

The PUD needs to arrange long-term industrial commitments so it can forecast how much power it needs to buy and sell on the market, he says.

Willenbrock says the PUD could look to other markets for power customers. “We buy and sell on the market all the time. Nobody’s isolated anymore.”

The PUD would rather produce power for local customers, he says.

“We pride ourselves on using Box Canyon as an economic development driver,” Willenbrock says. “If we have the opportunity to improve and maintain the tax base in Pend Oreille County, we would love to use it here at home.”

Pend Oreille County does have some competitive advantages, he says.

“You’re not going to find water, land, and power of this magnitude along the Interstate 5 corridor, at least for the price you can find here,” Willenbrock says.

On the other hand, being so far from major highways increases transportation challenges.

The Washington state Employment Security Department hasn’t received any formal notification on whether the Ponderay Newsprint will shut down in the near future.

Tweedy says the company, as an employer of more than 100 people, would be required under the Worker Adjustment and Retraining Notification Act to notify affected workers at least 60 days prior to closures and layoffs.

“We haven’t received that yet,” Tweedy says.