SNEDA takes strides to be bigger force in microlending 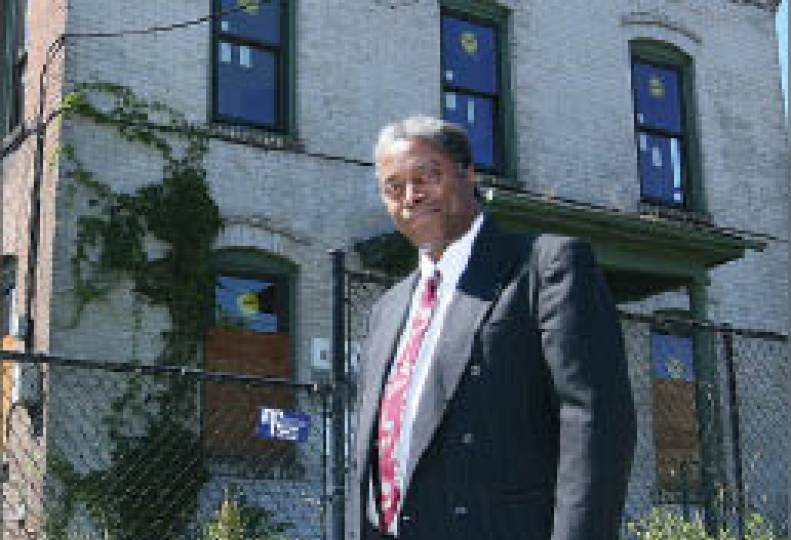 -—Staff photo by Paul Read
Thomas Speight, who heads SNEDA's office here, says the nonprofit lender plans to move to this building, near Browne Street and Pacific Avenue, once the structure has been redeveloped in a project SNEDA is participating in.

A Spokane nonprofit that provides microloans and other assistance to small and startup businesses says it's taking major steps to rekindle its efforts, including a quest to become an SBA lender, the hiring of a full-time loan officer, and a planned expansion into other communities in Eastern Washington.

The first of those strides began last August, when the nonprofit, the Spokane Neighborhood Economic Development Alliance (SNEDA), formed an alliance with Community Capital Development, a Seattle-based community development corporation that now provides management oversight for the SNEDA office here. Thomas Speight, who was hired as SNEDA's Eastern Washington director the following month and now heads the office here, says SNEDA's board knew the organization wasn't lending as much as it needed to be, and wanted to change that by bringing in the expertise and breadth of programs that Community Capital Development has.

SNEDA still maintains its own revolving microloan fund, which currently totals about $800,000, and a loan committee made up of its own board members approves any loans it makes, but Community Capital Development oversees SNEDA's operations and gives it access to other lending programs it offers on the West Side, Speight says.

Currently, he says, SNEDA has only three loans on its books—to a janitorial service, a catering service, and a day care, together totaling only about $100,000—and that's something the nonprofit wants to change.

"We have money to lend, and we're willing to lend it," says Speight.

Last month, SNEDA hired Kim Boyden, a former banker with AmericanWest Bank here, as its principal commercial loan officer, he says. Prior to that, loans were handled by Speight and his predecessor. Speight and Boyden are the organization's only two employees, though it has two regular volunteers as well.

SNEDA serves businesses, and also other nonprofits, that can't get a loan from a bank or other lending institution because they don't qualify under conventional commercial lending standards, perhaps because of a low credit score, a lack of collateral, or inadequacies in their financial statements or business plan, Speight says. SNEDA, he says, tends to have slightly lower lending standards than banks, but still must be responsible in its lending because it typically borrows from government sources the money it uses to lend, and those funds eventually must be repaid.

"They're unbankable," he says of SNEDA's clients. "Sometimes they used to be bankable, but aren't anymore," due to economic hardships they have suffered during the recession.

The pool of potential borrowers has grown dramatically with the poor economy, Speight says, adding that the office gets a half-dozen or more calls a week from would-be entrepreneurs and small-businesspeople interested in a loan. The problem, Speight says, is that most of the calls are from people who don't meet even SNEDA's more modest qualifications for getting a loan, perhaps another symptom of the economy.

"Some of these people have no business plan, no experience in the business they want to start, or no collateral," he says.

Speight says Boyden currently is working with seven or eight potential borrowers who have gone beyond initial conversations with SNEDA. He adds that it can take as little as two weeks to complete a loan, or as long as a year, depending on the borrower's circumstances.

In addition to cold calls, SNEDA gets referrals from banks, the Small Business Administration, university business assistance and entrepreneurial programs, and the city of Spokane, among others.

In cases where a potential borrower hasn't taken his or her business plan far enough to make the venture creditworthy, SNEDA provides some advice, what the industry calls technical assistance, to get the borrower on the road to becoming creditworthy, and often also points them toward other organizations in the community that can help them further.

"Technical assistance is what creates the pipeline of people and businesses that eventually will borrow money and create jobs," Speight says. "Job creation is our bottom line."

With few loans on the books, that doesn't provide much revenue for the office to operate, Speight says. That's one of the reasons the organization is looking to be more aggressive about finding and qualifying more borrowers, and to pursue a role as a U.S. Small Business Administration lender.

Speight says SNEDA wants to become authorized to make loans under a special SBA microloan program, which are different loans than the more common 504 and 7(a) loan programs and currently top out at a maximum amount of $35,000. The nonprofit expects to file its application for the program—and ask for initial funding of about $250,000—next month and hopes to hear back on its request by the end of the year, he says.

SNEDA's administrative partner, the Seattle lender, already makes SBA loans, and Speight says having both arrows in SNEDA's quiver will help the Spokane organization broaden its customer base.

"If they meet our standards (for a microloan) and they grow up a little bit, they could then do an SBA loan through us rather than us sending them off to a bank," he says.

He says SNEDA's goal is to be making $1 million a year in new loans, and it hopes to accomplish that partly through its planned affiliation with the SBA and partly by being more aggressive about making microloans and bolstering its loan fund with additional relationships with banks and the federal match that can come from that.

Meanwhile, he says, "We will look elsewhere in Eastern Washington," for business. Because SNEDA is affiliated with the Community Capital Development, in Seattle, it can take advantage of statewide lending programs that organization offers, including one targeted at veterans, Speight says.

If SNEDA grows at the rate it hopes, it likely will hire at least one additional employee here, perhaps someone who would focus on providing technical assistance to borrowers and potential borrowers, he says.

In addition to its main focus, which is the microloan fund, SNEDA also in recent years has begun to collaborate on property development that it believes has the potential to create jobs. Its most recent foray into that arena has been to team with Rencorp Realty LLC, of Spokane, on part of a project called Pacific Bridge. That project, which includes a collection of investors, would involve redevelopment of an entire city block at the southeast corner of Browne Street and Pacific Avenue downtown. For its part, SNEDA is helping to secure government funds for the project, and plans to move there from its current space at 715 E. Sprague, Speight says.

SNEDA was founded in 1999 as a collaborative venture by the city's four community centers, and originally was called the Community Centers Development Council. It changed its name to SNEDA a couple of years later.

SNEDA's loan fund was established in 2002, with initial funding from the city of Spokane, which ultimately provided about $220,000 toward the fund. The organization also became what's called a Community Development Financial Institution, a U.S. Treasury designation that made it eligible to receive federal grants and loans that can be used for such a microloan fund. The fund grew to its current size by matching those funds with loans to it from banks under the federal Community Redevelopment Act, he says.