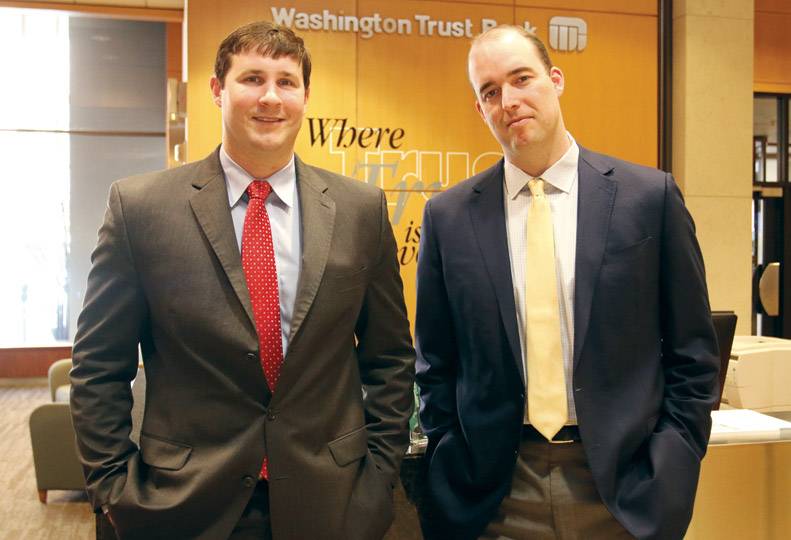 Being on a successful college athletic program such as Gonzaga University men’s basketball team enables players to visit many of the major cities in the U.S.

For some players, their athletic success at the college level has led to professional basketball careers in the NBA and overseas.

That said, a number of former players have returned to or stayed in the Spokane area to establish careers, make their homes, and raise their families. In all, at least a dozen former Zag players are living and working here.

Among them, two former Bulldog teammates, Richard Fox and Cory Violette, are together again in their post-basketball professional careers. Both now work downtown at Washington Trust Bank.

Fox has been with the bank for about six months and Violette was hired more recently.

Though they’ve lived together before and even bought real estate together years ago, Violette says it’s almost a coincidence that they ended up working in the same building now.

“When I heard there was this opening, I jumped at the chance,” Violette says.

“There’s still a little of that small-town feel,” he says. “It’s hard to walk downtown without seeing somebody you know. It makes it fun to be in this town.”

Fox says Gonzaga basketball has taught him about competitiveness and the ability to work with other people in stressful situations.

“Any kind of collegiate athletics contributes to success because of values learned from playing at a high level,” he says.

Violette says many lessons from his Gonzaga basketball days have stayed with him.

“Coach (Mark) Few brings players along not just to be basketball players, but members of the community,” Violette says. “Those relationships make it easy to stay in Spokane.”

He says he brought his competitiveness with him to job interviews after college, but has since learned to rely on teamwork.

“It’s a different kind of competition,” he says of his professional life.

“It’s hard to get away from the fact that Spokane loves the Zags,” he says. “We’re treated well here.”

Zach Gourde, a southwestern Washington native who played forward for the Bulldogs from 1998 to 2003, now is vice president of Environmental West Exploration Inc., a Spokane Valley geotechnical drilling company.

After his college days, Gourde left the Spokane area far behind for nine years, having moved to Europe for most of his professional basketball career.

“When it came time to make a career change, I looked at my social and professional network for where I should go next,” he says. “The answer was overwhelmingly Spokane.”

Gourde says he enjoys living in the Pacific Northwest, and the outlook on life in Spokane.

Lessons from basketball continue to influence his professional life.

“You can’t do something for that long and not pick up lifelong skills—the ability to work in groups, manage personalities, and communicate with a wide and diverse group of people,” he says. “When looking to get into the job market, I didn’t realize the value those skills would be vital in the workforce.”

Mike Nilson, who played guard for the Bulldogs from 1997 to 2000, now is co-owner of U-District Physical Therapy & Institute of Sports Performance as well as the strength and conditioning coach for Gonzaga.

He says he thought he would miss his native Seattle area, but when he walked onto the GU campus, he fell in love with the Spokane community.

Before he graduated, two brothers came to live here with him.

The family migration continued with another brother, a sister, his parents, and both sets of grandparents moving to the Inland Northwest.

“Home is where the family is,” he says. “We just love Spokane. We can afford to live in nice home and enjoy all the lakes and outdoor activities. The icing on the cake is having friends from college stick around, too.”

He hasn’t strayed far from Gonzaga.

Nilson says he recently marked 10 years in the physical therapy business, which has grown to three locations and a staff of 30, including nine therapists. He also recently launched the basketball training website built4ball.com.

“Sports is an awesome way to teach life skills that transfer to life and business,” he says.

Matt Santangelo played guard for the Bulldogs from 1996 to 2000. After Gonzaga, the Portland native played professional basketball with several teams in Europe for the next six years before returning to Spokane, where he’s now the executive director of Hoopfest, the largest annual three-on-three basketball tournament in the world.

He’s called Spokane home ever since his college days.

“It boils down to community,” he says. “I’ve developed relationships with a lot of people in town. I feel a great sense of belonging.”

“It’s nice to see some of the old (Bull)dogs making good on it,” he says. “They’re not just being here and trying to make a life off past recognition, but they’re taking active roles in the community and doing their best to be contributing members of society.”

He says Gonzaga’s success has contributed to economic development in Spokane.

“There’s not a university in the country that doesn’t want to see the Gonzaga effect,” Santangelo says.

Other cities, including Phoenix and Los Angeles, also envy Spokane for events like Hoopfest.

“Every city is looking for community outreach and economic impact like Hoopfest brings to our city,” he asserts. “People want to re-create it, but can’t figure out how. They can’t even come close to what we’ve done.”

He says Gonzaga basketball has taught him lessons in tenacity, discipline, and sacrifice.

“Those are all things you learn when you are on a team and give everything you have to achieve a goal,” he says. “I’m just fortunate life brought me back to the game and I’m tied to Hoopfest and Spokane AAU basketball.”

David Pendergraft, a native of Brewster, Wash., says Gonzaga basketball enabled him to travel to most every major city in the U.S.

“Spokane matches all of them and provides more,” he says. “There’s still some small-town feel, and you can get to the outdoors quickly and enjoy family time and different activities. It makes it difficult to leave.”

“Lessons learned from basketball include appreciating the value of hard work, dedication, and sacrificing for something greater than yourself,” he says. “There’s a ton of life lessons and business lessons if you pay attention and open your eyes while playing a sport at that level.”

Here are a few other former players living and working here, who couldn’t be reached for this story.

Winston Brooks, a native of Richmond Va., who played for the Bulldogs from 2001 to 2003, is a Spokane police officer.

Jeff Brown, of Mead, who played from 1991 to 1994, is executive vice president at Spokane-based Next IT Corp., a natural language software developer that will be moving to Spokane Valley later this year.

Casey Calvary, a Tacoma native who played for the Bulldogs from 1997 to 2001, is a sales representative for CoMedical, a medical technology company.

Dan Dickau, of Brush Prairie, Wash., who played for the Bulldogs from 2000 to 2003, is a broadcaster for ESPN and the Pac 12 Network. He also owns The Barbers.

Richie Frahm, who hails from Battleground, Wash., and played for the Bulldogs from 1996-2000, is a broker at Choice Realty.

Ryan Floyd, a Harrington, Wash., native, who was a Bulldog from 1995 to 2000, is a regional sales manager for Stryker, a medical equipment manufacturer.