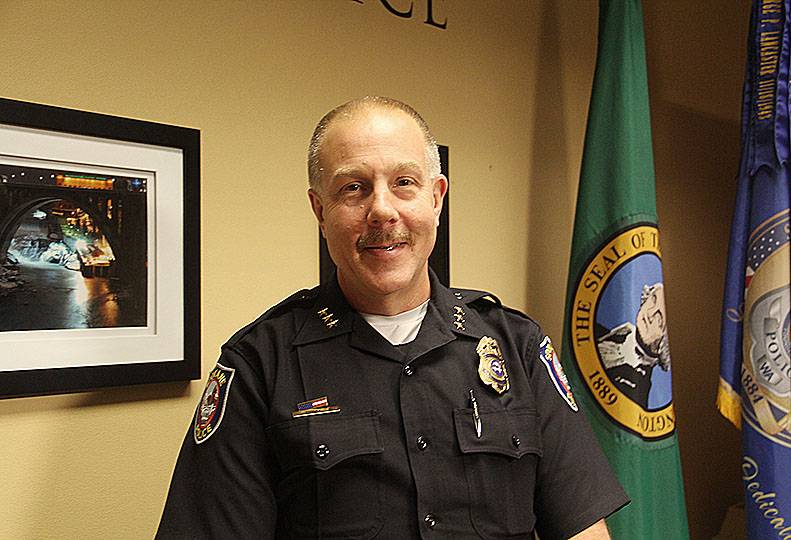 -—Staff photo by Jessica Valencia
Spokane Police Chief Frank Straub says law enforcement should be looked at as an investment. He hopes to bolster the force here during the next two years.

The Spokane Police Department is considering implementing a widespread precinct model here, similar to those used in larger cities, says Spokane Police Chief Frank Straub. The precincts would be modeled after its downtown precinct that officially began operating in June.

This new model and other systems being implemented by the police department would enable it to operate more like a business, Straub says, and hopefully better serve its customers, or in this case, the Spokane community. Separately, the police department plans to increase the number of officers it has to 300 from 268 by mid-2015, he says.

"If you want economic development, you need to have safe and stable neighborhoods," Straub says. "Policing should be looked at as an investment."

Straub says he expects to open two additional precincts in east and west Spokane, somewhere south of Northwest Boulevard and north of downtown, although the department hasn't determined a timeline for doing so.

He says the department is looking at several buildings in both areas and considered the former Albertson's building at 1617 W. Northwest Blvd., but decided against the property.

Located across the street from a Safeway store, the 43,000-square-foot building housed an Albertson's supermarket until the store closed in the fall of 2011. The building has remained vacant since then.

"We need to put them in places they're impactful, and yet locations that make sense," Straub says.

In addition to precincts, Straub says the department is considering using substations, which are smaller satellite offices set up throughout the city.

Spokane Community Oriented Policing, a nonprofit known generally as COPS and staffed by community volunteers, is independent of the Spokane Police Department and operates COPS substations in Spokane. The precinct model wouldn't replace those shops, although the department plans to consider incorporating the shops into the precinct model, he says.

COPS has operated here for more than two decades and has 11 substations in the city.

CompStat, a crime statistic and performance tracking system put in place earlier this year, compiles information for weekly reports used by the police department. According to the latest CompStat summary available ending July 20, total violent and property crimes were up 4.3 percent for the year compared with the same period last year, mostly due to property crimes. However, year-to-date numbers show there's been a decrease in the number of reported rapes, down 25 percent, and robbery of a person, down 7 percent.

The department's plan to add more than 30 officers by the first half of 2015 would be paid for mostly through city of Spokane funds, Straub says. That increase in uniformed officers as well as the use of CompStat, should equate to lower crime rates, he says.

The police department is located in the Public Safety Building, at 1100 W. Mallon, the same building that also houses the Spokane Municipal Court, and the Spokane County Sheriff's office, among other services. In general terms, the Public Safety Building is considered the primary hub for law enforcement here, but with the precinct model, individual precincts would operate as a unit with a commander in charge, in essence operating on some level as miniature police departments.

Straub, who became police chief last October, says prior to opening the downtown precinct, the department had a presence in the Spokane Transit Authority Plaza, at 701 W. Riverside.

The new facility, located at 725 W. Riverside, was created through a collaboration between the police department and Downtown Spokane Partnership, a nonprofit here that oversees the Downtown Spokane Business Improvement District and University District. Straub says the department looked at half a dozen sites downtown before deciding on the current location.

The hub has 12 police officers stationed there, including a captain, an increase from the seven officers and a sergeant that originally were planned due in part to the demographic makeup of people downtown and high street population.

"Because of the nature, we felt we should have a captain," Straub says. "The long-term goal is to also get a mental health practitioner to work hand-in-hand with us."

Straub says the idea of adding a mental health practitioner comes from his experience in White Plains, N.Y., and that including mental health professionals in police operations is becoming more common. Police should be a catalyst, Straub says, working with the neighborhood and public or private groups to address problems.

The department is considering plans for further expansion in the downtown corridor with the addition of a community court focusing on local crime and safety concerns that would be implemented in the next year.

Part of the overhaul process includes the use of CompStat. The system enables the department to produce weekly reports on both violent crimes and property crimes, and to determine where the crime hot spots are in the city. Straub says the department uses that data to find patterns and predict future crimes.

The system also helps the department do evaluations and performance tracking of law enforcement personnel and other employees.

Straub says the employee-monitoring element, which will be implemented by the first half of next year, takes into account customer complaints, sick days, and other data that are used to determine employee problems.

"We'll have this continuous snapshot of what we're doing," Straub says. "We'll be constantly reevaluating where we have efficiency and deficiency."