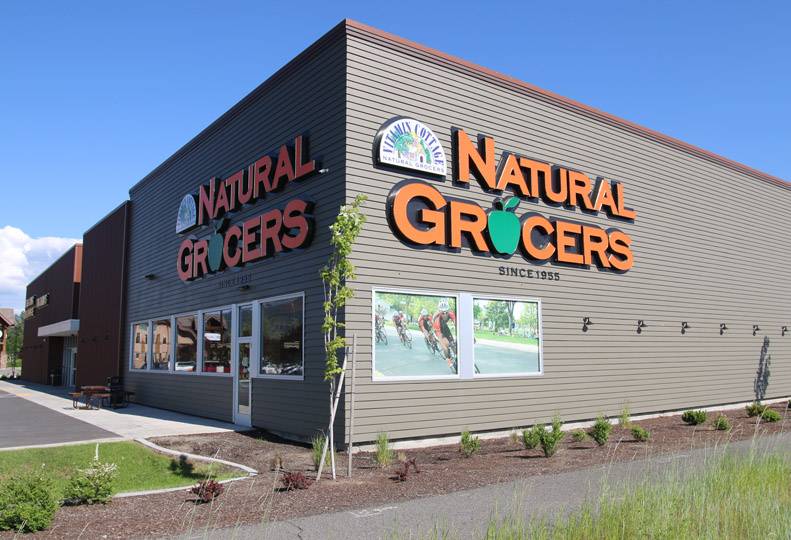 -—Mike McLean
Natural Grocers by Vitamin Cottage, which opened this store in Coeur d’Alene in March, is considering building a Spokane store on North Division.

Susan Livingston, a Seattle-based spokeswoman for Whole Foods Market Pacific Northwest Inc., which handles the company’s Pacific Northwest stores, says Whole foods is actively looking at sites in the Spokane market, although the company hasn’t made a firm commitment here yet.

“We’re getting a lot of calls from Spokane with people asking, ‘What do we need to do to get one?’” Livingston says.

It typically takes more than a year for Whole Foods to begin building a store when the company decides to enter a new market, Livingston says.

“It would be an intentional process to get in there and learn what we can about what people would like from us,” she says. “Our stores are designed from the ground up with unique needs of our customers there in mind.”

“We know Spokane is centered in some things that are important to us,” she says. “Agriculture is important in the larger community. It’s a food-interested community. Lots of cool producers are making cool things.”

When a Whole Food store opens, it typically has several dozen new vendor partners, she says.

Livingston says a Whole Foods “forager” is based in the Spokane area. “She works ahead of us in markets we’re not in yet, looking for things that might be a good fit for our stores and our customers.”

New stores typically have 150 employees, the majority of whom are new, local hires, Livingston says.

Natural Grocers by Vitamin College has submitted to the city of Spokane a predevelopment application that proposes a $2 million, 16,000-square-foot store location adjacent to the Office Depot outlet at 4511 N. Division.

About 9,200 square feet of the project would be new construction. The other 6,800 square feet would be converted from the north end of the space occupied by Office Depot.

Alex Dratch, manager at the Office Depot outlet, says the company plans to start a remodeling project next week that will include reducing the size of the office supply store by about a third.

Jeremy Jones, a Natural Grocers spokesman, says the company is still in the initial phase of considering a store site for its first Spokane outlet. “We haven’t solidified anything for Spokane at this time,” he says.

Natural Grocers has been emphasizing natural products for 60 years.

“It started when it wasn’t so trendy,” Jones says. “Now it’s become a staple, and that’s a good thing.”

He says Natural Grocers outlets are smaller than typical supermarkets.

“We focus on a smaller, more convenient and intimate store format,” Jones says.

The store has a demonstration kitchen and meeting space and offers occasional cooking classes and free nutritional education.

Jones says customers span a broad base from millennials and young mothers to boomers.

“People are becoming more aware, and more conscious of what they’re putting into their bodies,” he says.

“Natural Grocers has been trying very hard for a long time to get on North Division and on the South Hill, especially after opening in Coeur d’Alene,” he says.

The envisioned Natural Grocers store would be less than a mile south of the second planned Trader Joe’s outlet for Spokane.

A building permit for the planned Trader Joe’s $500,000 remodel is under review by the city of Spokane.

Jeda Designs, of Arcadia, Calif., is designing the project. Trader Joe’s hasn’t named a contractor for it yet.

Camp Hill, Pa.-based Rite Aid Corp. plans to move its Franklin Park store into a $1.5 million, 17,400-square-foot stand-alone structure that’s under construction in the northwest quadrant of the shopping center.

Trader Joe’s opened its first Spokane store in 2011 in the Lincoln Heights Shopping Center, at 3011 E. 29th, on the South Hill.

Byrd says Trader Joe’s now is considering expanding beyond the second store it has planned here.

“When we brought Trader Joe’s to the market, they came thinking this is going to be a one-store community,” Byrd says. “They now realize it’s probably a two- or three- or maybe even a four-store market.”

Whole Foods representatives have visited Spokane a couple of times recently, Byrd says. “They haven’t made a decision of where to go and when,” he adds.

Byrd says Whole Foods has been wavering between considering sites for one store or multiple stores, but is leaning toward a single, central location that likely would be downtown or near lower north Division Street.

It’s not the first time Whole Foods has looked at Spokane. The company had signed a letter of intent to buy the former Empire Ford dealership building at 423 W. Third, but backed out of the deal in 2008 due to the lagging economy and rising fuel costs at the time.

That building now is occupied by the Subaru of Spokane dealership.

Stores that feature natural and organic foods are growing.

“URM is looking at a health-food concept,” he says.

A spokesman for URM, the Spokane-based grocery distribution cooperative, couldn’t be reached for comment.

“They want an A-plus location, but you can’t just go out and buy them,” Byrd says.

A couple of potential development sites are envisioned on the South Hill.

“I think you’ll see these types of grocers on Regal,” he says. “The South Hill has a good demographic for their users. That’s where people with higher socioeconomic income are concentrated.”

One potential development site, tentatively called Commons on Regal, would be located on 9 acres of land formerly occupied by South Regal Lumber, at 5414 S. Regal.

Commons on Regal would be a multitenant retail center with a total of 75,000 square feet of commercial space.

Another potential development site is on property known as the KXLY or Radio Park site, where a mixed-use center that would have up to 100,000 square feet of commercial space and a residential component is envisioned. The site is on the west side of Regal across from the Regal Plaza, which is at the Palouse Highway-Regal Street junction.

“These stores are going to meet the market for healthy eaters who can afford to spend a little more and see the value in it,” Byrd says.

In a market already saturated with conventional supermarkets, existing stores are going to need to adjust to new market entries, Byrd says.

A handful of supermarkets have closed in recent years, including most recently a Safeway store at 1441 N. Argonne, in Spokane Valley.

“There could be additional fallout of standard grocery stores of 65,000 square feet,” he says.

“I’ve been told the Rosauers that closed in Deer Park was the direct result of WinCo opening,” he says. “When you have a giant store come in, it’s going to close down another.”