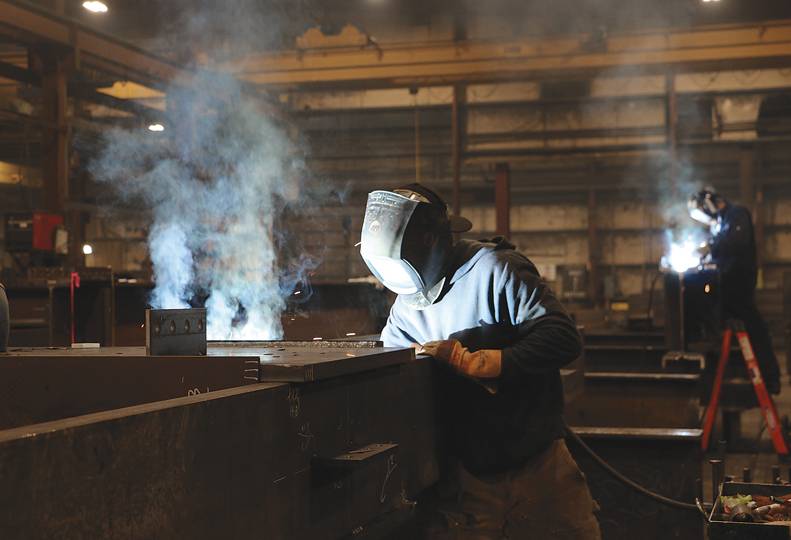 A trio of metals fabrication companies here are expanding. One is moving to a new facility, and two are building new structures.

Metals Fabrication Co. is in the planning stages for a new building, Rolled Steel Products Inc. has constructed a third building on its campus, and Spokane Metals LLC is moving from Airway Heights to Spokane Valley.

In Airway Heights, structural steel manufacturer Metals Fabrication Co. is planning a 30,000-square-foot expansion to the west of its 113,000-square-foot facilities at 2524 S. Hayford.

“It will eventually hold some new equipment that will substantially increase our current capacity,” says Matt Murphy, director of operations, estimating, and technology. “It’ll help us become more competitive. It’s definitely a big investment for a company of our size.”

Murphy says the project is currently in the permitting phase, but he hopes to break ground on the expansion in mid-January. If all goes as planned, it will be completed by the end of July.

Garco Construction Inc., of Spokane, is the contractor on the expansion project and is providing design-build services for the project, Murphy says.

Metals Fabrication specializes in fabricating structural steel framing for commercial construction projects. Murphy says the company’s primary market is the Seattle metro area, and a good deal of work in the Bellevue area is going out for bid this quarter.

“We want to position ourselves to take on more projects like these through the next couple of years,” Murphy says. “Some of (our) competitors are located in adjacent states with average lower wages and brand-new facilities, so it’s as important as ever to stay as current and efficient in our operations as possible. Expanding has always been a part of our growth strategy, and (with) the combination of major upcoming projects and competitors coming from out of state, the timing was right.”

Global demand for U.S. steel products has decreased as a result of trade disputes, Murphy says, leading to lower steel prices. However, new tariffs could provide some relief.

“The next phase of tariffs that the administration is considering is on fabricated steel from Canada, Mexico, and China,” Murphy says. “This could potentially have a larger benefit for a business like us (by) keeping lower priced international fabricators out of our markets.”

The company has 135 employees, Murphy says. With the expansion, he expects the company will hire some new employees, but he’s not sure how many because much of the new equipment will be automated.

Metals Fabrication Co. was established in Spokane in 1966. The company moved to its current facility, which occupies 23 acres, in 1987. Owners Todd Weaver, who is the company president, and Sara Weaver-Lundberg, who is vice president, are the children of founder Mark Weaver.

Spokane Metals LLC is creating a new home in Spokane Valley, on the 4000 block of north Barker Road.

President and estimator Sergey Kuchin says the family-owned and -operated fabrication and metal manufacturing company plans to move next June into a 22,600-square-foot building.

The cost estimate for the two-story steel structure is $2.4 million. Halme Builders Inc., of Davenport, is the general contractor on the project.

“We found the land, we bought the land; it was the right time and the right place,” Kuchin says.

The new building will be on the northwest corner of Barker and Garland Avenue. The Old Dominion Freight Line terminal, at 4101 N. Barker, is directly west of the site where Spokane Metals is constructing its new facility.

“It will be great to own the building and land, because we’ve always leased,” Kuchin says.

Spokane Metals currently has 19 employees and could hire another “four or five employees” once the relocation is complete, Kuchin says.

The new facility is roughly the same square footage as the company’s current buildings, Kuchin says, but having all operations under one roof will increase efficiency.

Spokane Metals does 90% of its business with general contractors in Eastern Washington, Kuchin says.

“Corrugated (steel) is a popular panel right now, especially in a galvanized look -- it’s used in new residential construction, as well as in agriculture,” Garvin says.

Owner Jeff Van Leuven says that while other companies offer corrugated steel, he claims none of them produce it in Spokane.

“Because the machinery that produces (corrugated steel) is relatively expensive, and because seven-eighths corrugated is a little bit of a niche market, the big guys around town have so far opted not to produce it here,” Van Leuven says.

“We’re constantly trying to broaden our product offering, and we had reached the limit of our existing buildings,” Van Leuven says. With the new building, Van Leuzen says the company’s property will be at maximum capacity.

No new employees will be hired to operate the new line, he says.