Observers here call uptick in April nothing but noise 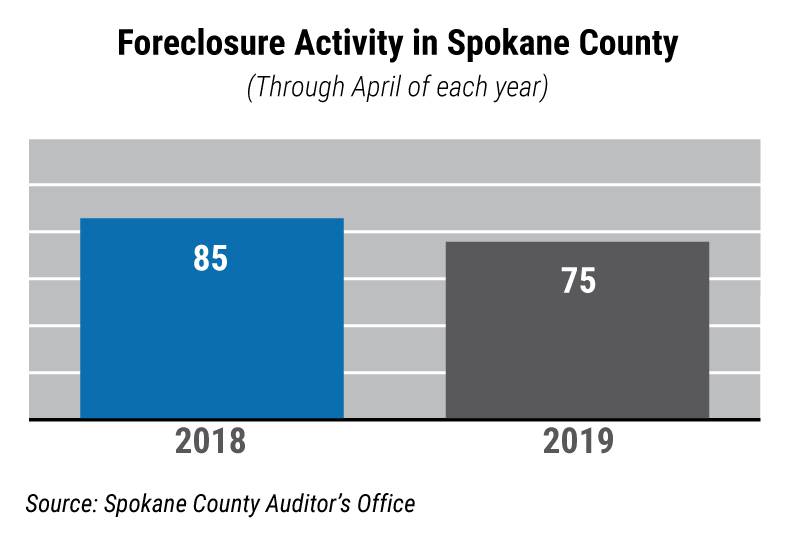 Spokane County’s economy has been on a 120-month expansion, Grant Forsyth, chief economist for Avista Corp. says. The last time its economy enjoyed this long of an expansion was in the 1990s until it ended in 2001 with the burst of the tech bubble.

“If we can make it to July, we’ll have the longest expansion since they’ve been able to keep records, going back to the 1850s,” Forsyth says.

Forsyth says the economic expansion and the low unemployment rates are helping to push the foreclosure numbers down.

With a deed of trust, three parties are involved, the borrower, the lender, and a third-party trustee that holds the deed until the debt is repaid.

“If you compare it to the last expansion — the pre-Great Recession expansion — foreclosures are even lower than they were then,” says Forsyth. “So, (what we have now) are incredibly low levels by historical standards.”

Rob Higgins, executive vice president of the Spokane Association of Realtors, agrees that foreclosure numbers are at a record low, stating only 1.7% of all sales through April recorded in the association’s Multiple Listing Service were in the “real estate-owned sales” category, which are foreclosed homes held by lenders.

This translates to 31 out of the 1,795 homes sold through April 2019. At the same time last year, the association reported 2,087 home sales, says Higgins, 73 of which were reported as real estate owned sales.

“It’s a different world today,” Higgins says. “During the recession a lot of people went sideways, but we’ve come out of that.”

Home sales have been on the decline this year, sliding 14% in April 2019 year-over-year, according to the association’s market snapshot. Higgins attributes this decline primarily to a lack of inventory of homes for sale, which, as of April, was 1,083, or a 1.9-month supply, down 7% year-over-year.

“In percentage terms, that’s large, but in absolute terms, I would consider that noise,” says Forsyth. “Those are very low numbers of foreclosures … small changes will look large in percentage terms, but based on absolute numbers and historical average, those are pretty low.”

Forsyth contends that the April numbers don’t reflect the current economic state of Spokane County, or even the state of Washington, saying, “There could be several factors at work here, but in this case, I don’t think it reflects what’s happening in the economy, because the economy is still relatively strong both statewide and regionally.”

Washington state ran counter to the national trend, with annual increases in both foreclosures starts and completions, reporting an increase of 38% and 53%, respectively — the highest rate of increase in the U.S. in terms of percentages, the report says.

“I don’t know what would bring about an increase in the state of Washington,” says Higgins. “I know the market on the West Side, in Seattle, has slowed some, but it’s still a very strong market.”

The spike in the state’s numbers can be illustrated by what appear to be drastic foreclosure increases in Whatcom County (up 1,400%), Kittitas County (up 400%), and Franklin County (up 300%).