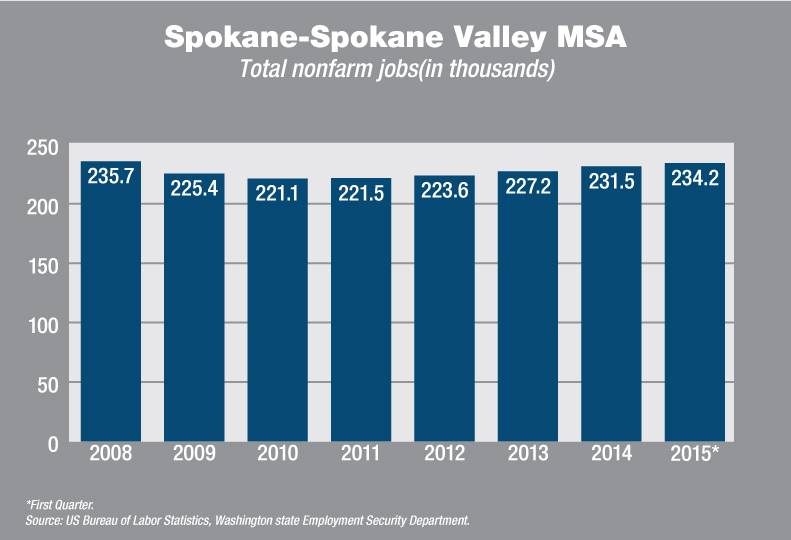 The mix of jobs, though, is changing, as some sectors, including construction and retail, are still lagging in the recovery, Tweedy says.

The prerecession job peak was in 2008, when the Spokane-Spokane Valley metropolitan statistical area had an annual average of 235,700 nonfarm workers, according to U.S. Bureau of Labor Statistics figures.

Following the recession, the low point in employment was in 2010 when the annual average fell to 221,100 workers, meaning the Spokane-Spokane Valley MSA lost a net total 14,600 in the wake of the recession.

Less than half of the number of jobs lost had returned by the end of 2013.

Most of the recovery in terms of jobs growth has occurred in the last 12 months, he says.

“The encouraging part is we had a really good first quarter. Usually the first quarter is a low-employment quarter because jobs are seasonal in Spokane,” Tweedy says. “We expect seasonal trends to increase through the summer.”

Some job sectors are outpacing others in terms of growth.

Tweedy says transportation and distribution, financial services, professional and business services, health services, and education all have topped the 2008 peak.

The growth sectors are changing the mix of jobs, for the most part adding above-average-wage jobs to the labor force.

Sectors that were hit hardest by the recession are still lagging behind in the recovery. Those sectors include construction, retail, manufacturing, and leisure-hospitality.

For comparison’s sake, the county’s average annual wage in 2013—the most recent figures Tweedy says are readily available—was $41,730, while the average annual wage for sectors now ahead of prerecession peak ranged from $43,500 for transportation and distribution jobs to $65,000 for financial-services sector jobs.

For those sectors recovering more slowly, the average wage in 2013 ranged from $17,142 for the hospitality sector to $45,900 for the construction sector.

The Employment Security Department began using the MSA data, rather than Spokane County-only data, in certain economic indicators this year, Tweedy says, adding that jobs likely are growing at a slightly faster pace in Spokane County than in the other counties in the MSA.

“Stevens and Pend Oreille Counties are recovering at a more modest rate than Spokane County,” he says.

As reported previously in the Journal, Spokane County alone lost 13,500 jobs in 2009 and 2010, and only had recovered 5,900 jobs by the end of 2013, according to the Community Indicators Initiative of Spokane website.

Some of the recent job gains shown in the total nonfarm employment numbers, though, aren’t showing up in the data Community Indicators use for calculating net jobs created, which tallies a net gain of 10,334 jobs from 2011 to 2014.

Patrick Jones, director of the Eastern Washington Institute for Public Policy and Economic Analysis, which operates the Community Indicators website, says the institute wants to work with the Employment Security Department to revisit how job-creation numbers are compiled.

Jones says the job-creation numbers don’t include people who are self-employed, though perhaps they should.

“The self-employed is a large chunk of the labor force and their share seems to be growing,” he says.

Last year, Jones had said job growth wasn’t on pace to reach prerecession levels until 2016 or even later, based on the job-creation numbers.

At any rate, Jones says, “We’ve had a very slow recovery.”

He says employment by the government sector, which is a significant part of the Spokane economy, has been flat in recent years.

The Spokane-Spokane Valley MSA average unemployment rate for 2014 was 6.7 percent, a full percentage point higher than during the 2008 peak year for job numbers.

Firm-creation numbers, which are only available through the second quarter of 2014, also aren’t showing much momentum, Tweedy says. The number of new companies formed in the first part of last year was about level with the number created a year earlier.

“A lot of the recovery has been with bigger and medium-sized companies,” Tweedy says. “Usually when that trend starts occurring, smaller companies follow.”

He says firm-creation numbers might also be offset by consolidations.