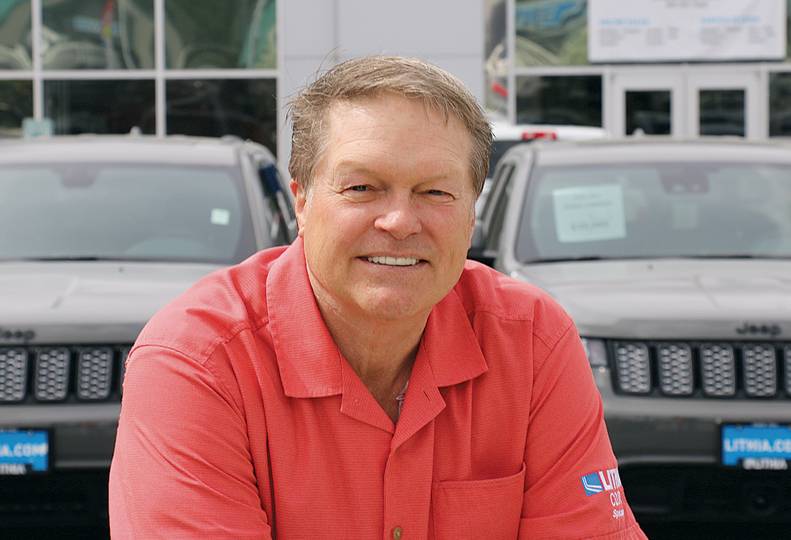 As the pandemic-related shutdowns sent automotive and recreational vehicle sales into a free fall, Spokane-area dealers detoured to the internet in unprecedented ways to move goods.

Sales floors absent the auto buying public due to social distancing measures forced the industry to learn new tricks, some observers say. Sales reps turned to their smartphones to send still images and video footage in an effort to stimulate buyer interest.

Even though Washington Gov. Jay Inslee allowed automotive sales floors to reopen on May 5 as part of the first of his four-phased restart of activity and the economy, moving forward, many in the auto industry say online selling may become its new norm.

Selling and buying cars online isn’t new, but what may be different is that it could become the primary way the industry does business in the future.

“I think the automotive industry as a whole has had the ability to do this for a long time,” says Mike Justus, the general manager at Camping World RV, located 19651 E. Cataldo, in Liberty Lake.

But not until the arrival of COVID-19 has the auto industry here relied exclusively on internet traffic to generate sales, Justus says.

As of the end of April, Justus says RV sales were down 27% this year compared to 2019. Of the sales that have occurred this year, 85% are from online leads, compared with 45% last year.

“The style of selling is very different,” Justus says. “Regardless of this pandemic, moving forward, we’re going to continue working to perfect the virtual experience for the customer.”

Scott Brewer, the general manager at Lithia Auto Stores, at 10701 N. Newport Highway, in North Spokane, says Lithia experienced a 51% decline in sales in the first week of April over the same period in 2019. The second week of April saw a 39% reduction in sales, and weeks three and four of last month both saw sales declines of 24% compared with the same time frame last year, Brewer says.

At the outset of the pandemic, Brewer furloughed 35 of 79 total employees. He says the remaining sales team members quickly made the adjustment to online sales.

Brewer, a 35-year veteran in the auto industry, echoes Justus’ sentiment that the auto sales industry may be changed indefinitely.

“We do virtual walkarounds, collect digital signatures, and now do home delivery. The customer doesn’t even have to come into the store,” Brewer says.

As part of social distancing measures, Lithia customers taking test drives do so absent a sales representative, he says.

Nationally, the automotive industry across the country has been walloped by the pandemic. Washington state was one of 26 states  to close auto dealers’ sales floors and limit sales to online only. Marketing company J.D. Power & Associates says U.S. auto sales were down 50% last month compared with April 2019.

In an interview with CNBC at the end of last month, Thomas King, president of the data and analytics division and chief product officer at J.D. Power, said the country is still “severely depressed” in terms of vehicle demand.

The company expects May to be a critical month for the industry. J.D. Power expects U.S. auto sales this year of between 12.6 million to 14.5 million vehicles, down from an estimated 16.8 million prior to the pandemic.

“The good news is we have turned the corner in terms of the declines,” King told the business news outlet.

As the auto industry tries to get back on track, there are those experiencing some consternation about the future.

Derrick McGee, a sales consultant at BMW of Spokane located on the North Side at 215 E. Montgomery, says he returned to work last week after being furloughed for a little more than a month. He says COVID-19 has created a vastly different work environment for sales-related workers.

“In general, it’s just harder to move cars,” he says.

McGee agrees it will be critical for sales personnel to perfect the use of online marketing to generate future clientele.

Jeff Boone, a sales consultant at Lithia working for Brewer, says he’s noticed that online vehicle shoppers sometimes tend to be less apprehensive in their interactions.

“Purchasing a car can be a stressful experience for a lot of people,” he says. “Being able to search online, interact online, feels like a favorable option for them.”

As a result of reduced sales, large discounts and low financing rates are also being offered as enticements to the public as the industry is desperate to move inventory. Depending upon the vehicle make and model, Brewer says zero-percent financing is being made available to qualifying customers for 84 months of payments with no down payment, he says.

“The incentives are as good as we’ve ever seen,” he says.

Justus says he and his sales teams are preparing for heavy sales activity over the next couple of months.

“There’s pent-up demand because people are feeling cooped up,” he says.

“You want to travel? You’re probably not going to want to do it in an airplane. It’s a petri dish. Take a cruise? Probably not,” Justus says. “But when you get an RV, you’re sleeping with your own DNA.”