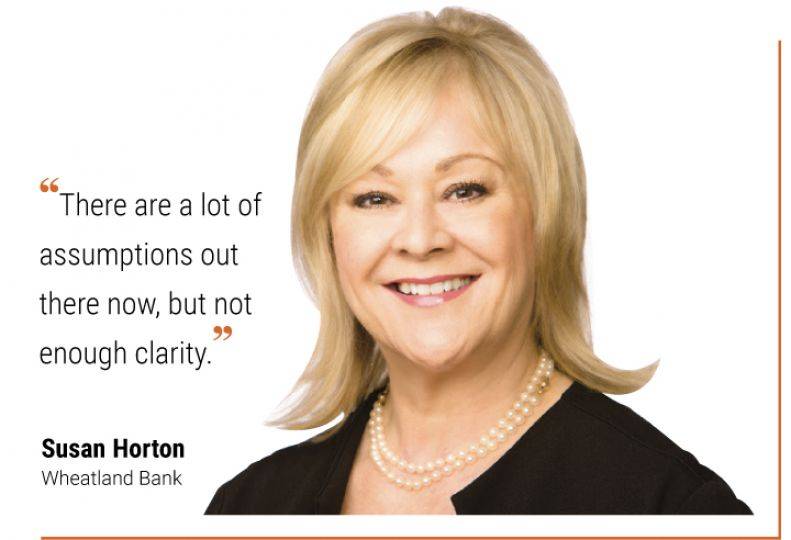 Inland Northwest bankers say they’re frustrated by a lack of federal guidance regarding particulars of the Paycheck Protection Program.

Some say they and their customers are confused about some aspects of the program.

President Donald Trump signed the Paycheck Protection Program Flexibility Act into law on Friday, June 5, as a response to concerns from bankers and borrowers about some parts of the original Paycheck Protection Program, included in the Coronavirus Aid, Relief, and Economic Security Act. While the new act has benefits for some borrowers, it’s caused additional confusion for banks.

Greg Deckard, president, CEO, and chairman of Spokane Valley-based State Bank Northwest, says he and other bankers have been dissatisfied with the speed at which the U.S. Department of the Treasury and the Small Business Administration have provided guidance on lending rules.

Specifically, Deckard says, the PPP flexibility act clashes with the original CARES Act that established the paycheck protection program in some ways, and in those areas, guidance from regulators is needed.

The new act appeared to extend the application deadline to Dec. 31, whereas the CARES Act specified that applications were due June 30.

That was resolved in the middle of last week, when SBA Pacific Northwest regional administrator Jeremy Field said forthcoming rules would clarify that the June 30 deadline is correct.

“The lender must receive approval from the SBA by June 30,” Field says. “If a business waits to apply until June 30, it will be too late.”

He adds, “There is not a long waiting period for PPP approvals right now. With the initial rush down, approvals are moving quickly.”

Another aspect of the flexibility act that was cleared up a few days after the act was signed into law is the shift in eligible expenses. The cap on nonpayroll expenses was raised from 25% to 40%, meaning the borrower can receive full PPP loan forgiveness with as little as 60% of the funds going toward payroll.

As specified in the CARES Act, forgiveness of a PPP loan is dependent on borrowers using the funds to maintain their payroll and pay other specified expenses, such as mortgage interest payments. Originally, borrowers were required to apply for loan forgiveness eight weeks after receiving PPP funds. If a borrower can’t prove that at least 60% of their PPP funds went to payroll, they could be eligible for partial forgiveness. Any loan amount not forgiven will mature after five years at a rate of 1% interest.

Deckard says PPP originally had a sliding scale of forgiveness for those who didn’t meet the original cap of 75% of funds going to payroll.

He says he was concerned that a “cliff” at 60% meant that those who had spent less than 60% of their PPP funds on payroll would not receive any forgiveness.

However, the Treasury and SBA have since clarified that borrowers who used less than 60% of their PPP funds would be eligible for partial loan forgiveness.

But Deckard says he’s still waiting for guidance or rule changes on what he says is the part of the flexibility act that’s giving bankers the most heartburn: the extension of the loan maturity date for any portion of a PPP loan not forgiven from two years to five years at 1% interest.

“Over five years, who knows what interest rates are going to do?” Deckard says. “At a 1% rate, if rates go up over those five years, then that’s going to put banks in a difficult position in managing their asset liability mix at a 1% fixed.”

The program originally wasn’t intended to leave small balance loans on the books for an extended time, he says.

Deckard says State Bank Northwest is continuing to process applications, but it’s one of many banks across the U.S. evaluating whether to continue participating in the program.

“We want to make sure that we process applicants that intend to apply for forgiveness and receive it -- 100% in, 100% out,” Deckard says. “Even though it’s a low interest rate, when you’ve got the potential for federal government involvement in any program and rules being subject to change like they’ve been, then doing a five-year loan under this program is not advisable.”

Susan Horton, president and CEO of Spokane-based Wheatland Bank, says that institution has stopped accepting new PPP applications temporarily, until Treasury or the SBA provide more guidance on the issue.

“There are a lot of assumptions out there now, but not enough clarity,” Horton says.

“Many customers backed out after their loans were approved because of some of the earlier legislation that has now been changed,” Horton says.

Deckard says he’s been concerned about the flexibility act’s change to the loan forgiveness period from eight weeks after loan disbursement to 24 weeks after disbursement.

Business owners who borrowed early in the first round of PPP loans are coming up on the eight-week deadline to apply for forgiveness and have already spent their PPP funds in accordance with a budget that took into account the eight-week forgiveness period, Deckard says.

“The extension to 24 weeks is not that helpful to them, because they’ve already spent most of it,” Deckard says.

Horton says most Wheatland Bank customers who have taken advantage of the PPP—40% of whom are in the agriculture industry—planned for the eight-week forgiveness deadline.

“We’re going to advise our customers, if they have spent the money, to stick with the eight-week rule and get it forgiven,” Horton says. “We’re looking for more guidance on what happens if a customer is able to achieve forgiveness before the 24 weeks but after the eight weeks.”

Daniel Byrne, CEO of Spokane-based RiverBank, says those who had hesitated in participating in the PPP will benefit from the extension, as long as they can apply before the June 30 deadline.

“It’s going to be a little more attractive now, particularly for industries that had been closed down by the government, that couldn’t bring employees back if they wanted to because they weren’t allowed to open, and now they’re able to open up at least on a limited basis and bring some employees back,” Byrne says.

Deckard says much of the confusion and conflicting information provided about the PPP is due to the unusual partnership of the Treasury and SBA.

“SBA was asked to take on a monumental task,” Deckard says. “In the first week of this program, they processed more loans in one week than they did in the last 14 years combined. It put a lot of pressure on the system.”

Deckard says he’s heard rumors that a third round of PPP funding of up to $1 trillion could be approved in the next few months. If so, he says, borrowers who have previously hesitated to take part in the program should jump on the opportunity.

In the meantime, Deckard says he will do what other bankers in the U.S. are doing: wait for additional guidance.