Property owners say removing it quickly is most effective 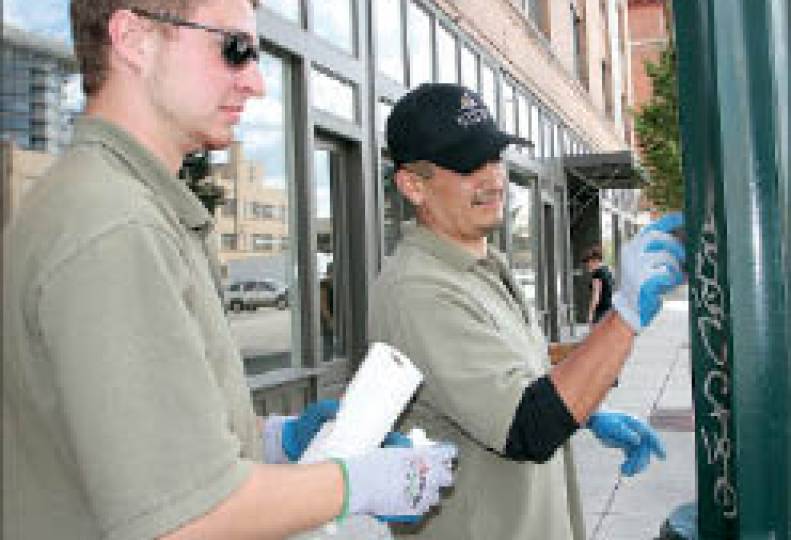 Driving through Spokane on the city's main arterials, it's not difficult to notice the deliberate, spray-painted scribbles and markings of illegal graffiti on buildings, signs, light posts, overpasses, and even in some residential neighborhoods.

Dave Black, CEO of Spokane-based commercial real estate firm NAI Black, says, "Graffiti is a huge problem, and it's becoming more and more prevalent" over the last several years. "It's not inexpensive to deal with. It's time consuming, and we're also finding more and more vagrants hanging out at our properties—not even vacant properties."

Randall Robertson, who owns Graffiti Removal Services here with his wife, Dru-Ann, says he's seen graffiti tagging across the city increase in the last several years, but at the same time hasn't seen demand for his business's services increase.

"The economy has caused things to slow down and we're on the back end of affordability," Robertson says.

Others here feel that graffiti hasn't necessarily gotten any worse in recent years, but is an ongoing issue that business and property owners have to deal with.

Nikki Carroll, a property manager with Spokane-based Vandervert Developments & Hotels, which owns about 20 commercial buildings in the area, says the company hasn't really seen an overall increase in recent years in the instances of graffiti on its buildings.

"I don't think it's happening any more now that the economy is bad, but we always seem to notice that it picks up in the summer when the kids aren't in school," Carroll says. "In the past week or two, we've had two different incidences at two different properties."

"We try and stay ahead of the game so there is no reason for them to keep tagging, and that is the only thing we can do short of actually having a security guard go through the parking lot, which would be expensive," she says.

One common factor that businesses and property owners say they're seeing citywide is that both vacant and occupied structures are being equally targeted by graffiti taggers. Carroll says there doesn't seem to be any notable pattern as to the location, or whether a building that gets tagged is occupied or empty—all incidents the company sees are random and across its portfolio.

Graffiti Removal Services' Robertson agrees that south of 29th Avenue on the South Hill is one of the city's highly targeted areas by taggers. So is the East Sprague Avenue corridor, he adds.

Eric Walker, graffiti abatement officer for the city of Spokane, says illegal graffiti costs an average of $300,000 per year to businesses and property owners across Spokane County.

Part of Walker's job is to enforce the city's graffiti ordinance, part of which requires that upon official notice from the city, property owners who've been hit with graffiti must remove it within 10 days or face a $513 fine. Walker says he also serves as a liaison between other jurisdictions, including the city of Spokane Valley and Spokane County.

"It's more of an outreach/educational program than enforcement," Walker says of his job. "I educate the public and businesses on how graffiti impacts the community and what they can do to prevent it from reappearing or how they can remove it."

Walker says vacant buildings are breeding grounds for graffiti, but adds that one of the main goals of graffiti taggers is to leave their mark on a highly visible surface with the goal to have their tag stay up as long as possible. Many taggers also take big risks of getting caught in the act by spray painting their moniker onto surfaces in busier parts of town, he says.

"The longer it stays up, the more street cred that guy gets, and if it's higher risk—if they climb a billboard to put up a tag—that is also more credibility amongst their peers," Walker says.

Many taggers also do their work during daylight hours, versus night, Walker says, because that adds to the high-risk element.

Walker says there are many misconceptions about the people mainly responsible for the large majority of illegal graffiti in and around the city. He says the main profile of nongang-related graffiti taggers is males between the ages of 18 and 26.

Only 10 percent of the graffiti in the Spokane area is gang related, Walker says, adding that most businesses are victims of tagger-related graffiti versus gang graffiti, which is intended to mark territory. Gang graffiti tends to occur more in residential neighborhoods, he says.

Walker says another common myth is that graffiti is only done by people of a lower socioeconomic status.

"It's not—middle and upper class people do it. It doesn't matter what someone's income level is who's a tagger, it's all over the board," he says. "What graffiti is about is attention."

In downtown Spokane, any graffiti that occurs in an 80-block area designated as the Business Improvement District, stretching between Maple and Browne streets and North River Drive and the railroad viaduct, is managed by the Downtown Spokane Partnership.

"If you clean it up, you take the wind out of their sails," Killstrom says. "It goes up one night and then it's gone the next night—the sooner you clean it, the more likely it won't be back."

That said, the DSP spends thousands of dollars to remove graffiti downtown, he says. One of Killstrom's duties is to oversee the DSP's Clean Team, a group of a half-dozen employees who remove graffiti, pick up trash, and help keep the downtown area welcoming and presentable. The cost includes supplies and the salaries of its Clean Team employees.

The DSP removes graffiti using specialized chemical cleaners, pressure washers, or a soda-blasting machine to remove it from more porous surfaces, like concrete or brick.

Aside from spray-painted tags, Killstrom says another big issue DSP is fighting is glass etching, which is when a person uses a special glass-cutting tool to cut into glass and leave a tag.

"That can get expensive very fast, and the same people who do graffiti tend to do that," he says.

The city's Walker says owners of vacant buildings should make it a habit to check out the entire perimeter of the property regularly. Should they find graffiti, they should make arrangements to get it removed right away.

"Taggers are all about personal fame," he says. "Graffiti is the only crime I know of that the purpose of the crime is to tell people that you committed that specific crime, which makes the graffiti culture very unique."

Walker says that property owners who opt to paint over graffiti versus having the spray paint entirely removed—which can be costly—should ensure that they're using the exact paint color of the rest of the building so the painted-over area isn't noticeable.

"Taggers like to paint over the patched area, and they get as much satisfaction out of seeing a patched up surface as doing the tagging," he says.

Walker also encourages citizens and business owners to report incidents of graffiti to him via his email, graffiti@spokanesheriff.org, or through a newly launched website, stopspokanegraffiti.org. Reports should include photos of the graffiti, the address of the incident, and the date and approximate time.

Citizens who catch a graffiti tagger in the act should call 911 to alert the Spokane Police Department, he says.

Walker says those reports of graffiti incidents from the public help the city and the SPD track down illegal taggers, such as the person who was responsible for tagging the number "57" across the city, and who was arrested early this year having caused tens of thousands of dollars of damage.

Some parts of the city are so badly hit by graffiti taggers that there hasn't been a concerted attempt to mitigate the number of incidents. One of those places is the public skateboard park downtown under the Interstate 90 viaduct, between Third and Fourth avenues and near the Division Street off-ramp, Walker says.

"The city hasn't established a plan on how to combat graffiti there. They have just left it there," he says.

Another highly concentrated graffiti spot is the alley between the railroad viaduct and the old vacant Crescent Warehouse building—which has been listed for sale for many years now—between Lincoln and Monroe streets, and across from the Steam Plant Square. That alley is just south of the railroad viaduct, where the DSP's Clean Team territory ends.