At least $83 million in work planned, underway by companies outside region 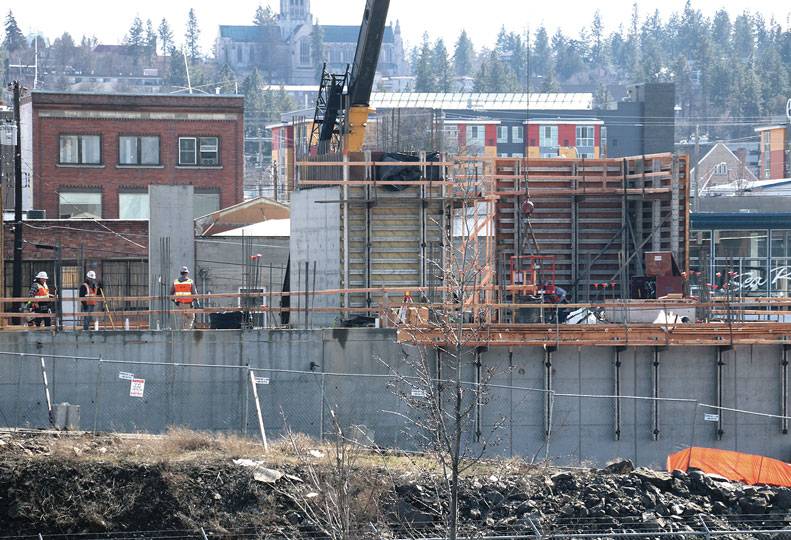 -KEVIN BLOCKER
A Portland company is developing the Boxcar Apartments building, which is rising in Spokane’s University District.

A Phoenix-based development group has projects in varying stages of development in Arizona, New York, Pennsylvania, and Washington, D.C., but it’s the planned project in Spokane that has the people behind Sagamore Spokane LLC excited about the future of its flourishing portfolio.

Then there’s the Portland, Oregon-based husband and wife duo, Paul and Leah Williams, who have their sights set on growing their smaller portfolio of projects with hopes of doing more work in the Lilac City through their development company Rad Space LLC.

In all, at least seven developers from three cities outside Washington state have projects in the works in the Spokane market worth a total of $83 million.

Those figures don’t include the $12-million, 100,000-square-foot Wonder Building redevelopment project that Denver-based developer—and Spokane native—Pete Mounsey finished on Spokane’s North Bank neighborhood in 2018. Nor does it include the more than $15 million-plus renovation of the former Otis Hotel, now called Hotel Indigo, in downtown Spokane completed last year by Portland-based developer Curtis Rystadt.

These development groups all represent an emerging trend of outside interests who say they see Spokane as a favorable place to do business and ultimately make money.

“We believe Spokane has all the things needed for a growing city that would be attractive to both people who want to move there as well as businesses that want to relocate,” says Robert Hayes, one of three members of Sagamore Spokane, which plans to build an almost 300-unit apartment complex overlooking the Spokane River.

While Sagamore is based in Phoenix, developers from the Portland area recently have grown a particular fondness of Spokane.

Hayes, who has taken on the role of spokesperson for his two other business partners, describes the trio as “a rather quiet group.” He estimates they currently have roughly $500 million in development in four states and the District of Columbia.

He says he and his business partners are fond of the Inland Northwest and vacation in the region often. He and his family were in Whitefish, Montana, last week when reached by the Journal.

Hayes has glowing praise for Spokane and greater Eastern Washington. Both he and his business partners have several mutual friends who live across the Inland Northwest.

Spokane will only continue to catch the eyes of those in other parts of the country as Spokane International Airports continues to add non-stop services to major cities while having a city government willing to work with developers and business owners, Hayes says.

“There are unlimited recreation options, world-class education and leadership, and overall affordability in the Inland Northwest compared to Seattle and Portland,” he says.

Sagamore’s 298-unit apartment complex, which will be known simply as The District, will be located between 955 and 1185 E. Martin Luther King Jr. Way just south of the Spokane River. The new apartment complex will flank the Hamilton Street James E. Keefe Bridge.

Hayes says Sagamore Spokane also has purchased 3 acres of nearby property at 112 N. Erie, which once served as home to Brown Building Materials, a longtime business that sold new and used building materials to general contractors and do-it-yourselfers until winding down operations in early 2020.

He says he anticipates the property will be developed as a future phase for The District.

“Our plan hasn’t been finalized, but it will most likely be more housing, or a food and entertainment destination concept that could bring much needed social options to the U District,” he says. “We believe Eastern Washington will continue to be a place people and businesses want to relocate to for all it has to offer.”

Spokane developer Jordan Tampien says he welcomes the increased competition in the marketplace.

“I’ve always believed that competition breeds better things,” he says. “And their perspectives, I think, can help us to envision what Spokane can be.”

Such positive outside sentiment about Spokane only continues to grow at the national level, according to Joel White, the executive officer of the Spokane Home Builders Association.

“While housing prices have gone up here, we’re still more affordable than other markets around the country,” White says. “The word is out that it’s a great place to live with a high quality of life.”

“There’s nothing definitive to substantiate those rumors, but that would be consistent with the in-migration that is occurring in the Inland Northwest,” he says.

Though they don’t have nearly as expansive plans in place as the Sagamore group, Paul and Leah Williams share the same level enthusiasm about doing business in Spokane.

Through Rad Space, the Williamses have submitted plans to the city of Spokane to renovate the Sherman Apartments, at 131 S. Sherman, at an estimated cost of $600,000. Their plans call for eight, one-bedroom apartments and one two-bedroom unit, city records show.

The Williamses say monthly rent prices will be in the area of $1,000 per month.

Paul is 46 and Leah is 41. The couple sold a business they previously operated in Portland for 23 years. Some of the proceeds of the sale have been used to explore investment opportunities.

A Washington State University graduate, Leah Williams says her recent research convinced her the couple would be better off investing in the Spokane market, instead of other places they looked.

“Each time we go through (Spokane), we’ve seen something new,” she says. “The redevelopment of Riverfront Park, the work on the North Bank--Spokane’s infrastructure has really impressed us.”