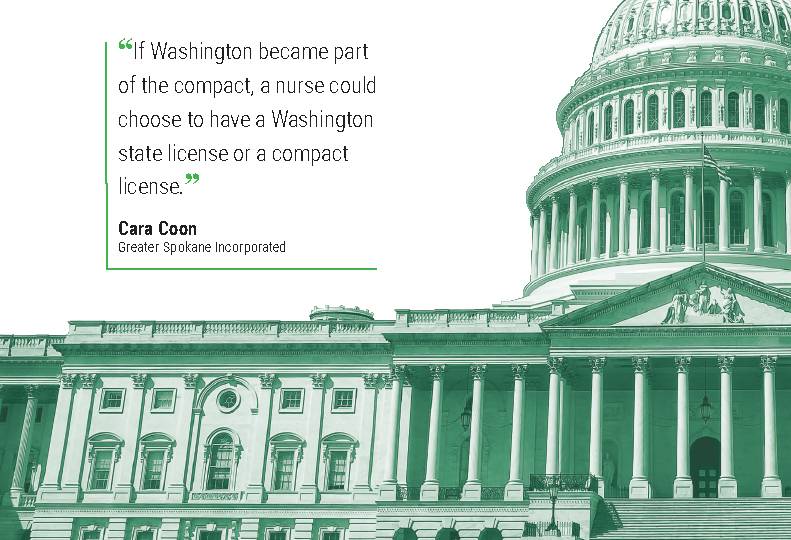 Issues and opportunities involving housing and health care top the list of priorities for Spokane-area municipalities and organizations as they prepare to make their cases at the 2020 Washington state legislative session.

To bolster the housing market, the city of Spokane hopes the Legislature will pass new laws that would add permanently affordable housing to the list of qualifying public improvements, opening such projects to tax increment financing, local infrastructure housing financing tools, and local revitalization financing.

The proposed legislation would rely heavily on tax increment financing, or TIF, as a way to incentivize developers to construct housing that would, by law, remain affordable in perpetuity.

“It would allow use of expected tax revenues in the future up front to build housing faster,” Poulson says.

“All the streets, sewers, and sidewalks were financed with the tax increment financing vehicle,” Beggs says. “It was paid for by the increased property tax revenues by developing that property.”

However, Beggs says he wishes there had been a way to use TIF money to buy nearby housing properties and place them in land trusts, thereby protecting them from gentrification. But at the time, TIF funds were available only to infrastructure, not to housing.

Under the proposed legislation, Beggs says he hopes to be able to include housing properties in TIF projects. Those properties would be placed in land trusts, meaning a nonprofit organization would own the land and would sell the home to a family with household income within a certain income range.

“Then those people own the homes and can resell them, but the sale price is restricted by a percentage per year,” Beggs says. “They can earn appreciation, but the first owner doesn’t get a huge windfall.”

Spokane, Spokane Valley, and Greater Spokane Incorporated are among the groups advocating for House Bill 1590, which Poulson says would allow city and county legislative authorities to pass a local sales-and-use tax of up to 0.1% to be used for housing and for mental and behavioral health services.

Housing provided through the proposed statute would be available only to certain populations, including homeless families with children, those who have experienced domestic violence, veterans, and senior citizens.

The measure failed to pass the most recent legislative session, Poulson says, but it’s already functionally in place in many areas.

“A lot of communities in Washington state have already used this tool,” Poulson says. “Typically, they go to the ballot and ask the voters to support the sales-and-use tax for housing.”

HB 1590 would relieve municipalities of the current requirements to place such funding measures on their ballots, he says.

Last year, the Legislature passed Senate Bill 5219, which augmented previous legislation regarding construction of condominiums. Under legislation passed in 2009, builders risked being sued due to the language of the condo warranty law. It was intended to protect consumers from dishonest developers who might construct shoddy condos.

Instead, Spokane Association of Realtors government affairs director Darin Watkins says, that law paved the way for condominium associations to sue builders and developers, which led to liability insurance rates skyrocketing. Thus, construction of new condominium developments has been a less common occurrence in the state.

“As you can imagine, it would be extremely expensive to build a condominium if you were automatically guaranteed to be sued,” Watkins says.

Under SB 5219, the law was clarified so that certain condominium construction warranty requirements don’t apply to condominiums with fewer than seven units.

Legislators passed the bill with good intentions, says University District CEO Lars Gilberts, but revisiting the legislation could remove the risk of lawsuits for condominium projects of all sizes.

“It would clarify the risk so succinctly that builders … don’t have a huge additional cost for liability,” Gilberts says. “It’s great for infill development in many ways; it lines up with what the city has done with their infill development standards, especially this last round.”

Among its legislative priorities, Greater Spokane Incorporated hopes to convince legislators to allow Washington to join the Nurse Licensure Compact.

GSI spokeswoman Cara Coon says West Coast states are conspicuously missing from the coalition of 34 states engaged in the compact.

“It basically serves as license reciprocity within those states,” Coon says. “If Washington became part of the compact, a nurse could choose to have a Washington state license or a compact license.”

The push to include Washington in the compact is being driven in large part by the U.S. Department of Defense, Coon says.

“One of their top issues is family and spousal employment of their military members in the U.S.,” Coon says. “We want spouses at Fairchild who are nurses to be able to practice and not have to wait two or three months to get their Washington state license, when they’re only (stationed) here for 18 to 24 months.”

Passing such legislation would help to ease a local shortage of nurses, Coon says, and would ensure that a full workforce of qualified nurses is available in Washington in case of an emergency.