Nonprofit to relocate to University District 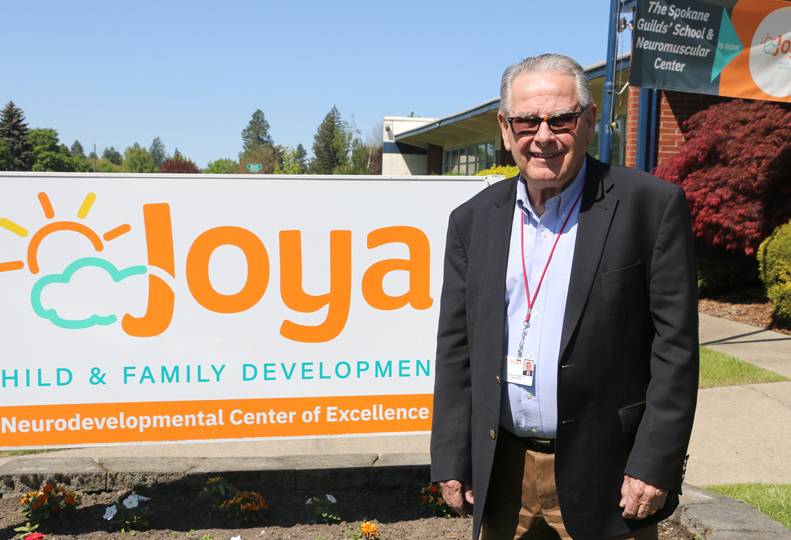 Clunky, outdated, and misleading are three words capital campaign manager Teresa Conway uses to describe the Spokane Guilds’ School & Neuromuscular Center name, on top of being a mouthful, which recently led the nonprofit to rebrand itself as Joya Child & Family Development.

Joya is a nonprofit, comprehensive assessment and therapy center for children ages birth to 3 years old who have developmental disabilities and delays.

About two years ago, the organization hired Chicago-based Campbell & Co., which has an office in Seattle, to do a feasibility study for its planned capital campaign to raise funds to build a new facility, Conway says, and part of what came back was that the public found the name confusing.

“If we were ever going to do a rebrand, the time to do it is when you’re moving to a new location and building a new facility,” she says.

Joya currently is located in a 20,000-square-foot facility at 2118 W. Garland, on Spokane’s North Side, which it leases from Spokane Public Schools for $1 a year. Its new facility will be located at 1016 N. Superior, just east of Gonzaga University in the University District. Dick Boysen, executive director, says the Garland facility lease will end in May of 2022.

The nonprofit hired DH, a Spokane-based public relations and branding company, to help with the rebranding.

“The words that kept coming back were hope, possibility, positivity, and joy,” Conway says. “So, we love the word ‘joy,’ and we wanted to find a way to work it into our name.”

Joya is a play on the Spanish word for jewel or gem, she says.

“That’s how we feel children with delays and disabilities are looked at and are treated when they come here; they’re looked at like a gem or a jewel, something to be treasured and discovered,” she says.

Joya plans to move to a new 52,000-square-foot facility in the University District by the fall of 2021, Boysen says, with construction on the new building expected to start in July of 2020 if the nonprofit reaches its goal. The nonprofit plans on breaking ground once it reaches 80% of its fundraising goal, he says.

The current facility wasn’t built for a program such as Joya’s, and the nonprofit has outgrown the space, says Boysen.

The main body of the new building will have two stories, with classrooms and therapeutic rooms. Attached to the structure is a single-story building that will hold a reception area, a nurse manager’s office, and the program coordinator’s office, as well as an exam room, Boysen says.

The administration and development offices will be in a 4,500-square-foot cottage currently located on the site. The cottage, known as Barry House, will undergo minor touchups.

Several cottages currently located on the site are being leased to Volunteers of America for veterans housing. All of the cottages, with the exception of the Barry House, likely will be demolished next year as construction on the new facility moves forward, Conway says.

A playground specially designed for children with disabilities or developmental delays will be included, and an area has been set aside for a future facility expansion.

The company has raised 25% of its needed capital, says Boysen.

“We’re on track. We’re just being methodical moving through that process,” says Conway. “This next fiscal year will be a big year for us in terms of bringing in the bulk of it.”

In total, the company is working to raise $18.5 million for its new facility, which it plans on achieving through donations, state and federal assistance, and new market tax credits, which provide incentives to investors for community development in low-income communities. The neighborhood has been zoned as a low-income community, and therefore qualifies for this program, Boysen says.

All of the funds will be allocated to the design and construction of the new facility, Boysen says.

Conway says Joya already has been awarded $1 million toward the project in the recently approved state capital budget.

Spokane-based Bouten Construction Co. will be the contractor, and NAC Architecture, also of Spokane, is designing the facility.

Joya paid about $2.2 million for the property in the University District in 2017, he says, using funds that the nonprofit had saved over the years.

“We had been looking for a site in the University District for the last 10 years,” he says. “There’s only 770 acres, just slightly over a square mile, so there wasn’t much available, but we had a relationship with the Sisters of Saint Francis of Philadelphia.”

The property appealed to the organization because of its central location and its proximity to two medical schools and four universities, allowing for ease of research access for students and professors that work with Joya, Boysen says.

With the new facility, Joya expects to increase the number of children it can serve to 600 from 300 and expects it will double its staff as well, he says.

Conway adds, “The ultimate goal is to be able to provide what we know is a life changing program to more children and families in Spokane County.”

In the 2018 fiscal year, Joya reported 47% of children participating in the program reached their age-appropriate milestones, meaning they won’t require special services when attending school.

Boysen estimates that at least 1,700 children in Spokane County qualified for Joya’s program in 2018 and says the Spokane Regional Health District identifies between 25 and 30 children between the ages of birth and three each week that have developmental delay.

In its current facility, Joya is only able to serve 20% of children who qualify for services in Spokane County, according to data provided by the nonprofit.