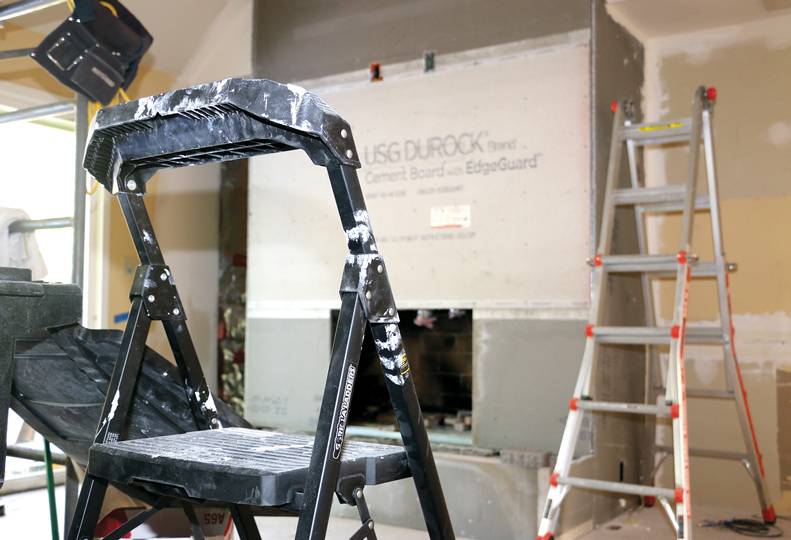 Spokane-area inventory of homes for sale has declined steadily over the past five years, and since then, the number of major home renovations has increased, say local experts.

Melissa Helvey, owner and lead designer with Post Falls-based CrafteD Kitchen Design, a design company that specializes in kitchen and bathroom renovations, says business has doubled over the last two years, which she attributes to a strong economy and low inventory of homes on the market.

Helvey says people want to move but are barred by a lack of inventory on the market, or they simply like their home and want to improve it.

“The economy’s been on an upturn for a long time, so that’s helping the confidence of the (renovation) buyers. They’re willing to invest a little bit more to get what they want,” she says.

Inventory has declined month-over-month since the Spokane Association of Realtors reported a 4.7 months supply in July 2014. The only break in the trend came in September and October 2017, which reported an increase and flat inventory year over year.  Overall inventory during those months, however, was still well below what is considered a stable market.

Current inventory is under 1,100 properties listed on the Spokane Association of Realtors Multiple Listing Service, which represents a 1.9 months supply, a 7% decrease, compared to April 2018, according to the associations monthly home sales report.

Permit numbers for renovation projects in the city of Spokane, city of Spokane Valley, and Spokane County declined during the same timeframe, however, dropping from just over 3,000 in 2017 to just over 2,250 in 2018. Consequently, the average permit value nearly doubled between 2017 and 2018, going from an average of $12,330 to an average of $24,460, indicating that renovators were doing larger, more expensive projects.

Wendy Nolan, owner of Spokane-based 509 Design, says she’s seen an estimated 30% to 40% increase in the number of clients over the past two years.

“When they look at inventory, they know they can sell their house quickly, but where are they going to go,” says Nolan. “So, they decide to renovate or do an addition to make their current house work the way they want it to.”

Nolan specializes in full-home renovations but says the majority of her projects are kitchens and master bathrooms.

Raena Strohmaier, co-owner of Strohmaier Construction Inc., of Spokane, estimates revenue for renovations have tripled from 2017 to 2019, and expects to hit $3 million in annual revenue this year.

Strohmaier specializes in whole-home renovations. She notes that the amount of floor space clients want to renovate has spiked as well, with more requesting whole main floor, or whole home renovations.

Jaime Curtis, owner of NW General Construction & Contracting LLC, concurs, adding that more clients are requesting larger jobs such as mother-in-law suites, which are additions for in-laws and parents to move into.

About half his company’s work is renovations, he says, while the other half is additions.

“I think that we’re going to plateau for a good year,” he says. “I don’t expect things to stay up as high as they are … everything the last few years has been steadily increasing, and it seems like real estate has gone up quite a bit in value, which helps our industry a lot.”

CrafteD’s Helvey is a Spokane Home Builders Association board member. The company currently has two employees and partners with contractors to handle construction, she says. She has operated CrafteD in the Inland Northwest for five years.

Helvey says labor costs have jumped as well, with fewer skilled carpenters in the workforce and established workers raising their prices.

Building costs have also jumped, Helvey says, which also contributes to the increased cost to renovate a home. A typical kitchen renovation used to cost between $35,000 and $65,000, she says, but it has jumped to between $55,000 and $85,000 or more depending on the scope of the project.

Strohmaier adds that in her experience, the materials hit the hardest by the tariffs include countertops, tile, and flooring, which are set to increase an additional 25% this month.

The U.S. Bureau of Labor Statistics producer price index for construction materials increased 2.4% from April 2018 to April 2019, and  0.9% between March and April this year, according to the Associated Builders and Contractors.

“Maybe they’ve been waiting, saving up, and they feel they’re in a good financial position,” says Helvey. “They’re ready and willing to spend the money.”

She adds that a lot of clients also went out and looked at the homes on the market or explored building their own but found limited options or costly expenses and decided it was easier and more efficient to renovate their existing space.

Nolan adds that she’s noticed a trend of clients who move into the Spokane area come in knowing they will renovate the home they buy, whereas local clients are more likely to build a new home.

Strohmaier concurs, noting, “We have a lot of people moving here from California and Seattle. They think they’re getting a heck of a deal when they come over here and gut the whole place. So, it’s a perfect market for us, being mostly renovations.”

Nolan adds that the contractor backlog for renovations has increased as well, and it will usually take between one and two months to schedule a project and another month or longer for the work to be completed.

Nolan currently has four employees at 509 Design, she says, and has done home renovations since 1996.

In terms of design trends, Helvey says renovations are trending toward contemporary styles with warmer colors, mixed metals or using metals as accents, integrated technology to assist with turning lights on and off, playing music, or making a cup of coffee, and more geometric tile textures.

Curtis says he’s seen similar trends, with more clients willing to spend more to add their own personality to the project, with bright colors and a shift toward combining a modern look with a more retro feel.

Strohmaier adds that clients have been pulling away from all-white kitchens and are more drawn to wood and color, as well as using hardware, such as faucets, as more design pieces. Appliances also are getting more visually appealing, she says.

“The design is becoming so much more important,” she says. “It always has been important, but we’re being exposed to the best designers around the country all because of Instagram and Pinterest, so I feel like people are a lot more aware of these design trends.”