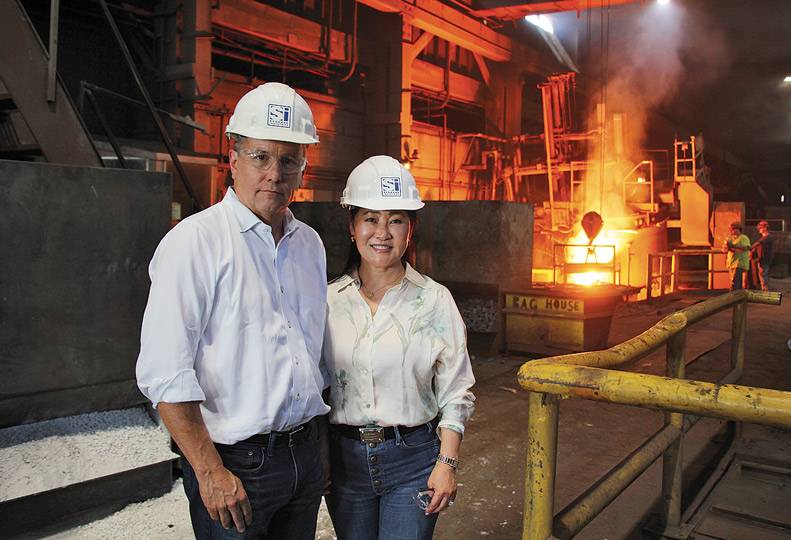 -Virginia Thomas
Pat and Lisa Turner say Spokane Industries Inc.’s revenue has increased by 27% during the first seven months of this year, compared with the year-earlier period.

The new owners of Spokane Valley-based foundry Spokane Industries Inc. say the company is responding positively to changes they’ve made since purchasing it earlier this year from brothers Greg and Tyrus Tenold.

Pat and Lisa Turner claim that employee morale is higher since they implemented a profit-sharing plan, and they say revenue has increased by 27% in the first seven months of 2022 compared to the year-earlier period.

The company currently has about 120 employees, 10 of whom have been hired since the Turners took the reins.

Spokane Industries casts iron and steel for a variety of industrial uses, including construction, mining, and transportation. The foundry is located in about 210,000 square feet of space in four buildings at the Spokane Business & Industrial Park, at 3808 N. Sullivan, in Spokane Valley.

The Turners, who are husband and wife, came to Spokane from Tucson, Arizona. Pat Turner is president of Spokane Industries and previously was president of North American operations for Denmark-based multinational engineering company FLSmidth & Co. He had been president of slurry pump maker Krebs when that company was acquired by FLSmidth. In 2007, FLSmidth acquired Spokane-based RAHCO International Inc. and established an office here. The Spokane office of FLSmidth has since closed.

Pat Turner says the slurry pumps Krebs made were manufactured from high-chrome iron castings. Much of Spokane Industries’ operations involve casting high-chrome iron, which is more resistant to wear and corrosion than some other iron-based metals.

“We decided 18 months ago that we wanted to move from a big company—FLSmidth is a multibillion-dollar company—to more of a smaller, family-run type of environment, which is where I started,” he says. “Early in my career, I was in and helped grow a small, privately held company. We wanted to get back to that, so we started a search for a foundry.”

He says he hadn’t heard of Spokane Industries before last year.

“Here at Spokane Industries, roughly half of our business is selling the same wear parts that I was used to, but for a different application, which is why I’d never heard of Spokane Industries before,” he says.

The Turners met the Tenold brothers and reached an agreement in September. They completed the transaction on Jan. 4.

Lisa Turner, who is CEO of Spokane Industries, says she believes her husband’s prior industry experience will benefit how the company does business.

“Pat, coming from the customer’s perspective, felt that there was a disconnect in the supplier and customer relationship,” she says.

Pat Turner says one goal for the company is to double its business within the first two years under the new ownership.

Lisa Turner says Spokane Industries has experienced reshoring. As supply chain problems have affected suppliers in China and India, many companies have been forced to turn to U.S.-based companies for materials and parts, she explains. Lisa Turner says she hopes the return of demand for U.S.-produced materials and goods is the new normal.

Pat Turner, however, says supply chain issues won’t persist indefinitely. The couple are working to find ways to secure the customers that switched to Spokane Industries due to the current dynamic.

“In order to succeed in the long term, we need to be competitive and quick so that they don’t want to go back to China and India for their supply,” he says.

The Turners have three children. Their middle child, Ian, works in the foundry, and has been part of implementing the five principles of 5S lean manufacturing, a workplace organization method which originated in Japan.

Lisa Turner says the 5S principles are intended to increase efficiency and productivity.

“Everything you need is within a few minimal steps, and everything has its place,” she says.

Spokane Industries’ employees have had input on proposed changes that impact their work.

“We work very closely with their ideas in improving their work,” she says. “They know their job best. They know what works best for them and what doesn’t.”

Each quarter, a fixed percentage of Spokane Industries’ operating profits set aside to form a profit pool, he says.

The amount in the profit pool is divided by the total payroll for the quarter. The resulting amount is paid out into each employee’s profit sharing account. For example, a profit pool of $100,000 shared among employees who make up a $1 million payroll would result in a profit-sharing bonus equal to 10% of their compensation, he explains.

“It includes overtime, so it gives them an extra bit if they work overtime, in addition to the normal overtime pay,” he says.

“They see this upward movement in our overall success, and everyone’s included and shares in that,” she says.

Spokane Industries was founded here in 1952 as Spokane Steel Foundry by the late John C. Tenold, father of Greg and Tyrus. In 1965, the foundry relocated to the Spokane Business & Industrial Park. In 1978, the company established a metal products division, and the foundry was renamed Spokane Industries in 1981. The company created a precision castings division in 1991 to produce investment castings, which typically are small wear parts formed using wax and ceramic molds.