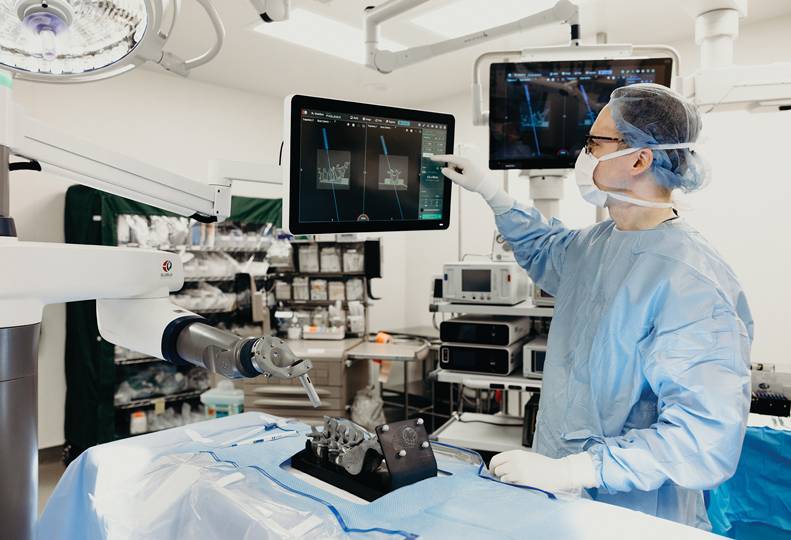 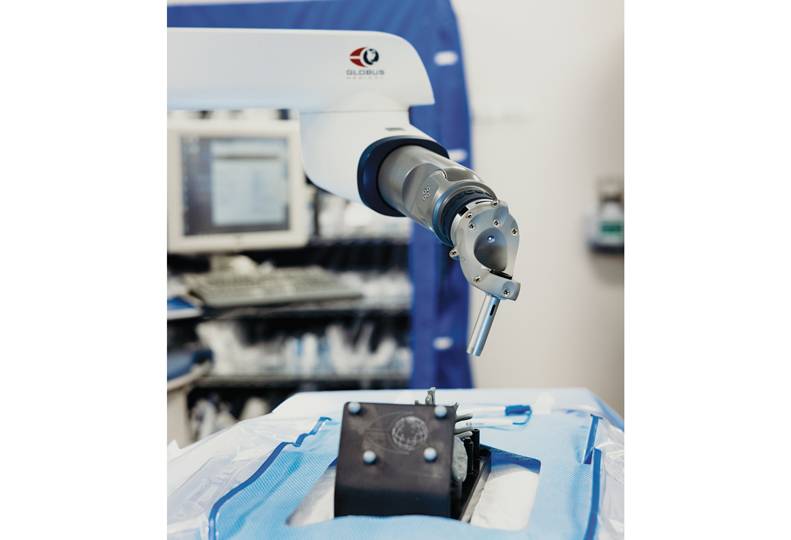 Now in possession of a $1.5 million robotic arm, a team of eight Inland Northwest neurosurgeons has a tool to improve the accuracy of spinal surgeries while helping to aid patient recovery.

By industry standards, says neurosurgeon Dr. Nathaniel Whitney, the technology is considered a best-in-class robotic system that combines surgical GPS navigation and robotic guidance to improve the accuracy of drilling and screw placement during spine surgery.

The neurosurgeons have been using the robotic arm, known as the Globus Medical ExcelsiusGPS, since the beginning of the year. Whitney estimates it’s been used in at least 40 different surgeries this year.

The ExcelsiusGPS is a result of a donation from Providence Health Care Foundation of Eastern Washington.

“Providence Health Care Foundation works with our clinical leaders to invest in the highest priority, most strategic needs to improve health care for our community,” says Colleen Fox, the foundation’s chief philanthropy officer in a prepared statement.

Funding decisions are made through a volunteer board of directors, Fox says.

“In the case of the neuro robot, there were also specific donations made to the project from grateful patients of our neurosurgery team,” she says.

Whitney is one of eight neurosurgeons who make up Inland Neurosurgery & Spine Associates, which is based on the second floor of the Sacred Heart Doctors Building, at 105 W. Eighth, on the Sacred Heart Medical Center & Children’s Hospital campus.

Founded more than 50 years ago, INSA’s neurosurgeons serve across the region including downtown at Sacred Heart; in north Spokane, at the Holy Family Sienna Medical Building, on the Providence Holy Family campus; at the Providence Medical Park, in Spokane Valley; in Colfax, at the Whitman Hospital & Medical Center; and in Pullman, at Pullman Regional Hospital.

To date, most of its use has been for spinal fusions, Whitney says.

Whether it’s from a degenerative condition or a fracture, a spinal fusion tends to be the most common form of spinal surgery. Though not all of INSA’s patients require a complete spinal surgery, he estimates he and his fellow neurosurgeons handle more than 1,000  brain and spinal cases annually.

Whitney says the customary price range for spinal surgery is anywhere between $15,000 and $40,000, depending on the procedure.

“In my personal practice, my patient makeup is off to one end of the spectrum,” he says. “I’m doing a lot of cases that are revisions; complex spinal surgeries where they’re on their third surgery for an ongoing problem.”

Whitney compared the robotic arm to global positioning systems in cellphones and modern vehicles. While streets and roads were in place well before the arrival of GPS, the technology has removed much of the guesswork that once went into driving—especially in places that are unfamiliar.

“We’re taking something that we’ve already done and adding another layer of precision and accuracy to it,” he says. “The robot’s not doing the surgery for us; it’s just helping us do it.”

Smaller incisions and less manipulation of healthy tissue is another advantage of the ExcelsiusGPS, he says.

The robot has a surgical arm that’s equipped with a tool that helps guide neurosurgeons to place implants precisely in patients without having to peel away more layers of healthy tissue than needed, Whitney explains.

“As the surgeon is placing the implant, the robot is helping you place it exactly where you want it to go,” he says.

The ExcelsiusGPS has a series of sensors that give notifications to doctors letting them know whether they’re on or off track in their desired implant placement.

“It’s a very interactive tool with the surgeon who is right there doing it,” Whitney says.

Ultimately, the neurosurgeon team wants to see patients recover faster with the help of the technology.

“Part of the beauty of having a computer-assisted surgery is that we can start to do less invasive surgery,” Whitney says.

In the past, back surgeries involved doctors making a large incision in the center of the back, then pulling away voluminous layers of muscle from the spine so the surgeon could see the bones to complete the surgery.

“You were going through, or pushing aside, a lot of healthy tissues to reach a pinched nerve or a fracture,” he says.

The result of such an invasive process is extreme blood loss and tissue inflammation, Whitney says.

“And that translates into more pain for the patient after surgery,” he says. “It’s a trauma to your back.”

Within the last decade, however, new advancements in technology have given neurosurgeons more tools to conduct back surgeries in less invasive fashion, he says.

“This robotic technology is the next step in this goal to get the job done and be less invasive,” he says.

Less time on the operating table, less blood loss, and less time in the hospital ultimately is to the benefit of the patient, Whitney asserts.

As INSA neurosurgeons become more familiar with the ExcelsiusGPS, Whitney says he expects he and his colleagues will shave time off back procedures, which have a great degree of variance depending on the patient.

“That’s one of the goals,” he says. “We haven’t gotten to that point I’d say because there is a learning curve in getting all this ramped up and trying to get everybody more efficient on a newer technology.”

Whitney, who is 43, and has been with INSA for six years, says ExcelsiusGPS is highly intuitive.

“I equate it to getting a new iPhone. It’s very tactile—you’re not sitting at a keyboard typing in code,” he says. “It incorporates very easily into what you’re doing. The human interaction has been very well thought out.”