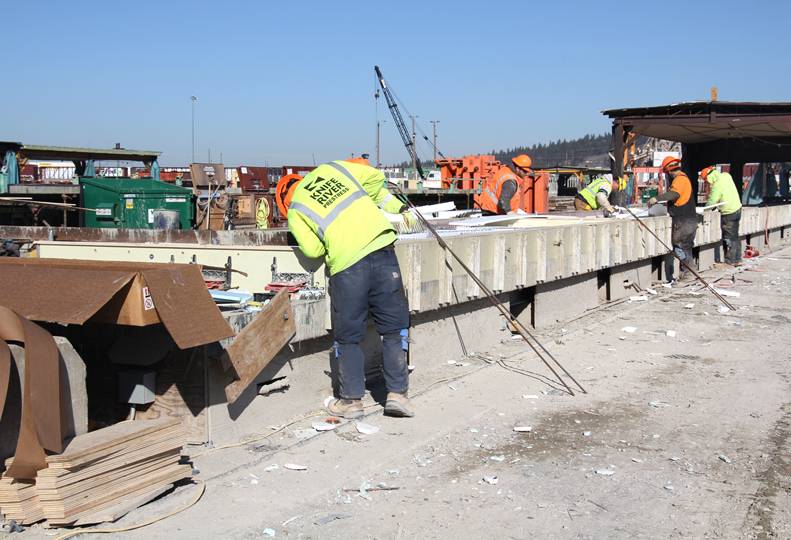 -Virginia Thomas
Crews work on a precast concrete component at what now is the Knife River Prestressed facility, in Spokane Valley. The operations there employ about 80 people.

The acquisition gives Knife River a foothold in the Inland Northwest and provides the Spokane Valley facility with more opportunities to be involved in projects throughout Washington, Idaho, Montana, and Oregon.

Tony Spilde, Knife River director of communications, marketing, and training, declines to disclose the terms of the transaction, which was completed Feb. 14.

“By combining, we’ve effectively doubled the size of our prestress operations (companywide),” Spilde says. “Because of that, we’re able to serve our customers better by sharing resources between both of our operations. We can meet tighter schedules, and we can get to places within our territory that we weren’t able to reach before.”

Prestressed precast concrete products are used as components in constructing wall panels, bridges, and parking garages. Precast products are growing in popularity due to the fact that components are created off site, then transported to the project site, where the structure is put together piece by precast piece.

Elsewhere, Knife River sells construction materials, such as rock for making concrete, as well as asphalt, prestressed and precast concrete, and rebar. The company’s additional services include concrete construction and asphalt paving.

Knife River was founded in Harrisburg, Oregon, in the 1950s before it was acquired by MDU. Its operations currently employ about 6,000 people in 15 states. MDU Resources reported 2019 earnings of $335 million, up from $272 million the previous year. Spilde says Knife River’s portion of the company saw 2019 earnings of $120.4 million, a 30% increase from the previous year.

According to Knife River’s website, the company has acquired more than 80 companies since 1992.

Gay says Knife River intends to “invest in a new, modern facility in Spokane,” though he declines to discuss further details regarding a new facility.

“There are a lot of details that need to be figured out in terms of when and where and how much,” Gay says. “For the next six months to a year, it’s business as usual.”

Gay says that all employees were offered salaries at or above the level they received prior to the acquisition.

The Spokane Valley facility has been involved in many Spokane-area construction projects, including in recent years the Davenport Grand Hotel, the Amazon.com Inc. distribution facility on the West Plains, and the Looff Carrousel remodel in Riverfront Park.

Outside of the Spokane area, Knife River Prestressed currently is involved in casting concrete components for the Seattle Center Area redevelopment project. Sales manager Blake Johnson says components are shipped to Seattle using an Airway Heights-based transportation company and are erected by a Post Falls company.

“We’re bringing a lot of business to Spokane that would otherwise be done in other markets such as Portland or Seattle,” Johnson says.

Knife River Corp. had a presence in the area prior to acquiring the Spokane Valley site.